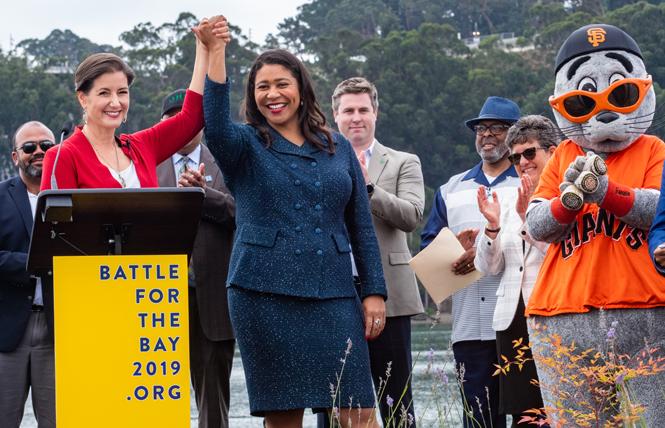 The challenge is to protect the bay by cleaning and greening both cities.

Oakland and San Francisco will compete to make the most impactful cleanups measured by volunteer turnout, amount of debris removed, geographic area cleaner, beautification projects, and most unusual object found by a volunteer.

"Battle for the Bay will help protect our cherished bay and is part of our broader efforts to keep every neighborhood in our city clean, green, and beautiful," Breed said in a news release.

"From the streets to the shores, this annual cleanup is an opportunity to shine that thousands of Oaklanders make a huge success every year," Schaaf said in the release. "This year we're building on that success by bringing new support into our neighborhoods where the community faces illegal dumping everyday."

She said that sidewalk trash is often just a few steps away from contaminating natural waterways.

"By cleaning up our neighborhoods we're also protecting the bay," Schaaf added.

The event has drawn major support from sponsors on both sides of the bay, including Recology and Waste Management of Alameda County, California Waste Solutions, and the Golden State Warriors, who used to play in Oakland but next month begin the season at the new Chase Center in San Francisco.

To sign up as a site coordinator, find volunteer locations, register as a group, or for more information, visit www.battleforthebay2019.org

According to the center, all funds raised will go toward its HIV prevention program. There will be free HIV and hepatitis C testing at the event between 11 a.m. and 5 p.m.

Tickets are $25 and include brunch and the show. For more information, go to https://bit.ly/2m2XMo9