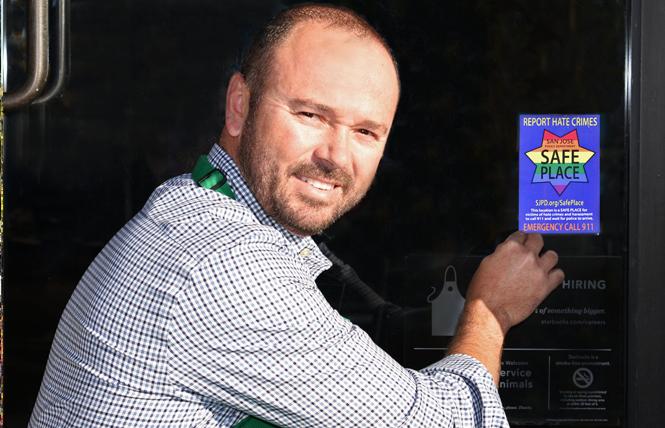 The South Bay is working on getting a handle on hate crimes on two fronts: a countywide task force and a new program in San Jose.

The following day, the San Jose Police Department launched the Safe Place program with Starbucks and Wells Fargo Bank, which includes an identifying decal posted at the business' entrance.

The city and county didn't work together to coordinate their announcements but both occurred during the South Bay's Pride Week. Chavez and James Gonzales, SJPD's LGBT liaison officer, both told the Bay Area Reporter that it was a coincidence, but demonstrates that hate crimes are on officials' minds.

"I would like to be able to say that there was a call for people to take action against hate crimes and 24-hours later we came up with this and responded, but unfortunately, that didn't happen. This has been in the works for quite a long time," said Gonzales, a gay man, about the Safe Place program.

"This to me feels like an answer to what was called for," Gonzales said. "There are a lot of different pieces of it, but this is certainly one of them."

He said the police department wanted to come up with a way to help protect people who are experiencing violence and hate.

"I think this is exactly the type of thing that those council members and supervisors were hoping is going to happen," he added, referring to the San Jose City Council and the county board.

Pride, corporations, and police
Gonzales spoke with the B.A.R. August 23, an hour after the city's police department raised the rainbow flag at its headquarters.

It is reportedly the first time a Pride flag has flown outside a major city police department.

The B.A.R. questioned Gonzales about the history between the LGBT community and the police and recent calls for corporations and police to get out of Pride in cities around the country.

The Stonewall riots in New York City started when patrons at the Greenwich Village bar rose up against police during a raid, sparking the modern gay rights movement.

The Safe Place program was launched by the Seattle Police Department in 2015 to provide places for LGBT victims of hate crimes to receive help. Since then, the program has expanded to more than 200 law enforcement agencies in North America and, in 2018, broadened its mission to include other communities targeted by hate, according to the Seattle Police Department's website. It is not affiliated with the National Safe Place Network, which is a youth outreach and prevention service for people under 18.

The Safe Place program that originated in Seattle has been successful in more than 130 cities around the world, Gonzales said.

Seattle is Starbucks' home with its headquarters and first store at Pike Place Market. The coffee giant touts its inclusivity and LGBT-friendly policies and consistently receives a perfect score on the Human Rights Campaign's Corporate Equality Index.

"We are really proud to partner with the San Jose Police Department to really enhance public safety in the area for the LGBT community and other citizens who are victims of harassment or hate crime," said Dubenko, who's an ally.

All 62 of San Jose's Starbucks locations are designated "safe places" for community members to seek help when needed, Dubenko told the B.A.R. Designated employees are trained on how to handle situations when customers request assistance.

The corporation's partnering in different cities demonstrates its commitment to the community and public safety "speaks volumes to how successful" the program is, he said.

Adrienne Keel, director of the LGBTQ programs at the LGBTQ Youth Space in San Jose, a part of Family & Children Services of Silicon Valley, a division of Caminar, praised the new program.

She told the B.A.R., "We have had folks who have experienced things," explaining the space and its staff respond according to how a youth chooses to handle the situation.

The Safe Place decal at the entrance of a business is one more tool for targeted communities, like the LGBT community, to know they are supported, Keel said.

"They should have as much accessibility to a safe place to report as possible," she said.
She added that it was important that Starbucks and Wells Fargo stood up for the LGBT community by participating in the program.

"It's pretty important these businesses that people frequent all of the time [are] really stepping up," by doing this extra thing showing that "we want our communities to feel safe. We want our communities to feel supported," said Keel. "I wish more big businesses would take it upon themselves to do more for the community, not just profit off of us, but actually do what they can to make these safe spaces."

Added Gonzales, "If you are walking down the street and you see these stickers in these businesses ... you are going to know that the police department cares and the business community cares, and they are going to do something about it."

Garcia added in an August 23 news release from SJPD, "The program is not just targeting victims — people who might consider spreading hate should take notice that this community has banded together. San Jose is not a safe haven for your bigotry."

He hopes the program will expand all over the city so that people won't have to go too far to see one of the emblems displayed at a business and have the confidence that they can go there to report a hate crime if necessary.

Four businesses applied to become safe places within the first 24 hours of the program's launch, with much help from Starbucks and Wells Fargo's brand recognition, said Gonzales, praising the corporations for showing "their value and setting an example for other companies."

Hate on the rise
Chavez and Gonzales recognize that hate is on the rise in Santa Clara County and other cities and counties across the U.S.

In 2015, the B.A.R. reported that county officials estimated that LGBTQ people account for 4% of its population, which at the time totaled 1,894,605 people, based on 2014 census figures, the most recent available. A Gallup survey released in March of that year looked at LGBT residents of the country's top 50 metro areas, and found that the LGBT population in the San Jose-Sunnyvale-Santa Clara area was 3.2%, or 3,368 residents age 18 and older.

According to California Attorney General Xavier Becerra's 2018 "Hate Crime in California" report, 58 hate crime events were reported throughout Santa Clara County, with 37 of those occurring in San Jose. Figures for 2017 indicated there were 57 reported incidents countywide, with 45 taking place in San Jose.

ABC7 News reported last week that there have been at least 19 incidents of reported hate crimes in San Jose so far this year.

Hate crimes are defined as "any criminal act or attempted act intended to frighten, harm, injure, intimidate or harass an individual, in whole or in part, because of the victim's actual or perceived disability, gender, nationality, race, ethnicity, religion or sexual orientation."

There are a couple of reasons for the increase in hate crimes, Gonzales believes. One is there is an increase of hate in general. Second, law enforcement and local governments are pushing for people to report when they are victims of hate crimes.

Chavez, the county supervisor, said she has noticed that unlike other communities, such as ethnic and immigrant communities that have experienced hate and been speaking up, the South Bay's LGBT community hasn't garnered as many headlines when incidents happen.

"We hear about some horrendous things I've never seen in the paper," she said.

"I don't know if it's because we don't report it or we don't have people on those beats," she said. "I just don't know.

"That's something that the task force can actually have a conversation about," she added.

Benefits
Chavez and Gonzales anticipate a rise in reported hate crimes due to the Safe Place program and the new task force.

San Jose's police department is "working harder to get people to report hate crimes," said Gonzales. "With more people reporting we will see more of them recorded."

"That's really the goal, because we know that they are underreported," Gonzales added. "These crimes are happening, they just are not getting reported and we are not catching the people who are doing it as frequently as we would like."

Chavez, who represents District 2, said there are benefits of the rise in reported hate crimes. First, she hopes more victims will be connected to services offered through the district attorney's hate crimes team and perpetrators will be prosecuted.

Second, she said, "We are going to have a stronger understanding of these kind of crimes and then how to stop them from happening."

Hate crimes are a community-wide issue, they both said.

"Hate is a societal problem and when there are problems in society the police are not going to be the only answer to solving it," Gonzales said.
"This is a community-wide problem, so it's going to take the community to solve it," added Chavez.
In Chavez's view, hate crimes aren't only crimes perpetrated due to race, status of immigration or nationality, or sexual orientation and gender identity, but also violence within families and upon women.

Hate crimes are actions "intended to demean another human being to be dominant over another person," she said. "We've got to be really thinking more broadly about the implications of crimes of hate in our community."

Chavez wants to identify early indicators of violent behavior and work with young people, who can lead the way to reducing these types of crimes.

She also expressed an interest in considering alternatives to imprisonment, such as harm reduction programs.

"We are going to need to think very creatively about how to start to really get into our communities and address these issues," she said, talking about working with police, public health experts, community organizations, and others. "We've got to include all of these communities that make all of these different parts of our community ... in order to really address this."

"As a community, we want to be able to stand together and say, 'Nope, not on our watch. That's not going to happen here,'" she said.

The Santa Clara County Board of Supervisors will formally propose the Hate Crimes Task Force at its regular meeting September 10, at 9:30 a.m. at 70 West Hedding Street, first floor, in San Jose.

Chavez hopes to launch the task force by the beginning of October.

Businesses can sign up for the Safe Place program at http://www.sjpd.org/cop/safeplace

For resources for reporting and getting services for hate crimes, visit www.sjpd.org/reportingcrime/hatecrimes.html or www.sccgov.org/sites/da/prosecution/DistrictAttorneyDepartments/Pages/Hate-Crimes-Team.aspx