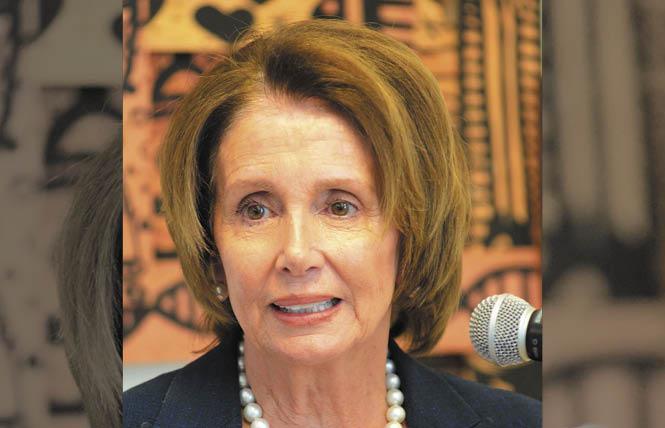 House Speaker Nancy Pelosi (D-San Francisco) on Wednesday blasted a Trump administration proposal out of the Labor Department that would allow federal contractors to discriminate against LGBTQs.

The Labor Department announced August 14 a proposed new rule for federal contractors through its Office of Federal Contract Compliance Programs. It would greatly expand the ability of employers receiving federal contracts to avoid current employment non-discrimination requirements for religious reasons.

The proposal came less than 24 hours after the end of public comment on a proposed rule change for the Affordable Care Act.

Lambda Legal Defense and Education Fund said in a news release that the proposal was published in the Federal Register August 15, which will begin a 30-day public comment period.

In a statement late Wednesday, Pelosi assailed the proposal as more of the same from the Trump administration.

"From Day One, this administration has tried to inflict a campaign of intolerance against the American people," Pelosi said. "It's unceasing attacks on the civil rights and human dignity of the LGBTQ community and on other vulnerable populations profoundly dishonor our values as a nation and undermine the freedoms of all Americans."

"Today, the Trump administration once again demonstrated its hostility toward LGBTQ Americans, minorities, and women by announcing its intention to effectively gut a key federal non-discrimination protection," he said in a statement. "This is yet more evidence that we need to enact H.R. 5, the Equality Act, which the House passed with bipartisan support earlier this year."

The Equality Act, an amendment to the 1964 Civil Rights Act, would protect LGBTQ people from discrimination throughout daily life.

Jennifer Pizer, director of law and public policy at Lambda Legal, pointed out that many large institutional employers have conservative religious affiliations.

"We know the most vulnerable workers will be LGBTQ people, as well as Muslims, Jews, and other religious minorities," she said. "For more than half a century, the federal purse has been a transformative driver of equal workforce opportunity in this country.

"The administration's license to discriminate is cruel, blatantly bigoted, and downright dangerous," she said. "This hateful rule would green-light open discrimination against tens of millions of Americans in the workplace, using taxpayer dollars to throw into jeopardy their safety, financial security, and well-being."

Nadler called on the Senate to immediately pass the Equality Act. Given that the Senate is on recess until September and controlled by Republicans, that is unlikely to happen.