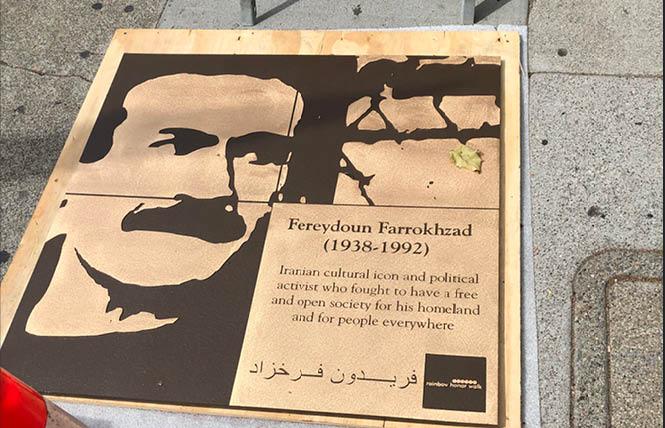 A new plaque for Fereydoun Farrokhzad, a gay Iranian singer, actor, poet, writer, and TV and radio host, was revealed in the Castro Friday as part of the Rainbow Honor Walk. Local Iranian leaders had raised objections to the language of the original plaque. Photo: Matthew S. Bajko

Another eight LGBT luminaries have been honored with sidewalk tributes in San Francisco's Castro district, part of an effort to educate the public about LGBT history while also celebrating the neighborhood's significance to the LGBT community.

Known as the Rainbow Honor Walk, the project celebrates deceased LGBT individuals for their noteworthy contributions to society, whether in politics, the arts, or the sciences. Organizers unveiled the octet of new bronze plaques, which measure 3 feet by 3 feet, installed in the sidewalk along upper Market Street August 9.

Also revealed Friday was a new plaque for Fereydoun Farrokhzad, a gay Iranian singer, actor, poet, writer, and TV and radio host. An iconic opposition political figure in his country who is little known in the West, Farrokhzad's death in 1992 in Bonn, Germany at the age of 53 remains a mystery. It is widely believed that the Iranian government was behind his murder.

When his honor walk plaque was initially unveiled in 2017, it referred to Farrokhzad as a "Muslim entertainer and martyred political activist." The wording prompted local Iranian leaders to contact the honor walk organizers and raise objections about it, said David Perry, a gay man and public relations professional who helped conceive of the project.

They pointed out that Farrokhzad had "eschewed his religion later in life and would not want to be identified as Muslim," Perry told a small crowd that had gathered Friday morning to see the new plaques. "They also explained that the word martyr has connotations that are quite negative in their culture."

The wording on the new plaque now refers to Farrokhzad as an "Iranian cultural icon and political activist who fought to have a free and open society for his homeland and for people everywhere."

It was to be securely installed into the sidewalk over the weekend near the vacant storefront at 2390 Market Street. Perry told the Bay Area Reporter that the Neda Nobari Foundation, which had pointed out the concerns about the former plaque, had offered to pay the approximate $6,000 cost to forge the new one.

But the honor walk raised the funds on its own, said Perry, as it has a standing policy of not seeking sponsorship for individual plaques. The people being honored by the project are not selected due to donations received, he explained.

A representative from the foundation did not attend Friday's ceremony or respond to the B.A.R.'s interview request prior to the unveiling.

Each plaque features the visage of the person, a short bio, and their signature. The eight revealed this month are the second group of 24 people to be added to the honor walk since being selected in 2016. The new plaques can be found along the 2200 and 2300 blocks of Market Street between Sanchez and Castro streets, bringing the current total of stops along the honor walk to 36.

"This is a unique historical moment. Education has become political," said Perry. "If we don't write our history, no one will."

The city's public works department oversaw the installation of the plaques this week, incorporating the work into a streetscape project it has underway for all of Market Street. It had installed the first set of honor walk plaques in September 2014 as part of a streetscape improvement project on the 400 and 500 blocks of Castro Street. Several plaques at that time were also embedded in the sidewalk on a portion of 19th Street.

Eventually, the honor walk organizers would like to see plaques line all of Market Street between Castro and Octavia Boulevard. It is where the city's LGBT Community Center is and is also the northern boundary for the newly created Castro LGBTQ Cultural District.

To see the latest plaques, start at 2336 Market Street, home to MX3 Fitness, where embedded in the sidewalk is the tribute to bisexual American singer Josephine Baker. By the entryway to Flore cafe at 2298 Market Street is the plaque for trans pioneer Lou Sullivan.

Just steps away, in front of 2280 Market Street, now home to Barry's Bootcamp, and the Zephyr Real Estate office at 2282 Market Street, is the tribute for lesbian American physician and political activist Marie Equi. At its unveiling, Michael Helquist, the author of "Marie Equi: Radical Politics and Outlaw Passions" (Oregon State University Press, 2015) joked that "she definitely got laid in San Francisco."

In a brief interview, Helquist told the B.A.R. that Equi, who died in 1952 at the age of 80, was the first known lesbian to publicly come out on the West Coast. She spent 10 months in San Quentin State Prison on sedition charges for protesting U.S. involvement in World Word 1. She was sentenced, noted Helquist, the day after the war had ended.

"She was fiercely independent and she was bold. ... She is a really good model today for youth and older people for her resistance to economic and social injustice," said Helquist, a gay man who lives in San Francisco and was joined by several friends all wearing T-shirts bearing Equi's image and the words "doctor, lesbian, agitator."

Nearby Equi's marker is one for gay English poet W.H. Auden. It can be found in front of Right Style Salon at 2264 Market Street. On the other side of the boulevard, near the entrance to Finn Town restaurant at 2251 Market Street, is the plaque for bisexual Queen frontman Freddie Mercury.

And in front of clothing store R by Rolo at 2267 Market Street is the marker honoring gay Congressman Gerry Studds, who was outed by the revelation that he had an affair with a 17-year-old congressional page. It led to his being censured by the House in 1983, though Studds weathered the scandal and won re-election to his seat.

His friend Peter Goss, a gay man who works at the nearby Zephyr office, said, "I remember him always in my heart."

The two had met in 1983 in Washington, D.C. at the gay bookstore Lambda Rising, where Goss was working at the time. They would often get together for dinner, and Goss and his partner vacationed at Studds' home in Provincetown, Massachusetts. When he joined the board of the honor walk, Goss noticed that Studds' name was on the list of recommended people to be included and argued in support of his being selected.

"He was someone I truly admired," said Goss, who co-owned the now-closed Tangerine restaurant that was at the corner of 16th and Sanchez streets. "The story goes that he turned his back to the House when he was censured."

By this fall a total of 44 plaques should be part of the honor walk. Organizers are aiming to see the next set of eight plaques installed along Market Street by October 11, National Coming Out Day.

Additional honorees for the Rainbow Honor Walk are to be announced in early 2020, said Perry.

To learn more about the project and its honorees, visit its website at http://rainbowhonorwalk.org/.