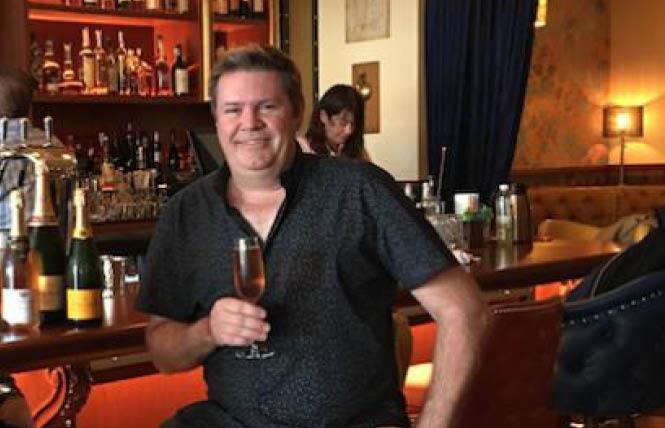 On the heels of the abrupt closure of several Castro restaurants this year, Finn Town, the popular Market Street "tavern with a twist," may shut its doors if business doesn't improve, the owner said this week.

In an August 6 letter to friends and family, owner Rick Hamer wrote that the restaurant, which opened to great reviews in 2016 and has appeared on a number of "best of" lists, "needs ... help to survive and remain a mainstay of the neighborhood that we so love and cherish."

In an August 9 telephone interview with the Bay Area Reporter, Hamer, a gay man, also said he has definitely decided not to open a planned takeout cafe, Little Finn Emporium, two doors down from Finn Town's location at 2251 Market Street, which has had "coming soon" signs in the window since last year, when Hamer began renting the space.

Hamer also owns Papi Rico, at 544 Castro Street, a cantina that specializes in "street foods" found in Puerto Vallarta. He said that Finn Town has experienced a slowdown in business, which he attributes in part to a drop in foot traffic in the neighborhood.

He attributed the decrease in foot traffic to a number of factors, including "the departure of so many neighborhood gems," he said. Just this year, three longtime favorite eateries — Chow (215 Church Street), Firewood (4248 18th Street), and Eureka Lounge (4063 18th Street) — have closed. The latter two spots remain empty while a new restaurant, Cook Shoppe, has moved into the former Chow location.

A number of neighborhood colleagues at other restaurants have told Hamer that they, too, are experiencing a slowdown in business and subsequent financial problems, he said.

"You'd be surprised how many other places may also close soon," he told the B.A.R.

"The past few months have been rough," Hamer wrote in his letter. "We are working hard to stick around but we need your help to do so.

"Please come by and visit us — for a drink, for a bite, hopefully for both (maybe book a private event). We have an updated menu with a lot of welcome surprises and some old favorites," he added.

Describing how dire the situation is, Hamer wrote that the restaurant "really needs to up our foot traffic in the next two weeks, otherwise we can not promise anything beyond that."

"We have supported so many community groups and causes over the past 3 years — from gift cards for auctions to Dining Out for Life to hosting dinners for so many other causes — now we need your support and help so we can continue to do so," he wrote.

He added that he could have chosen another city neighborhood in which to open, but selected the Castro to help invigorate it.

In an email to the B.A.R., Hamer elaborated on the business downturn at his restaurant, as well as the troubles that have led to so many empty storefronts in the neighborhood.

The increases in "homelessness, cleanliness, and street crime" have driven people away from coming to the Castro, he wrote. Now it seems "only cheap drinks" is what brings people to the neighborhood, he added.

The recent legislation making it easier for neighborhood businesses to open, introduced by gay District 8 Supervisor Rafael Mandelman is "great," wrote Hamer, but "what about the ones who have been here for five years or more? The pie is not getting any bigger, so when new places come in, it directly takes market share away from existing businesses."

As the B.A.R. has reported, Mandelman has criticized the zoning as "overly restrictive" and spearheaded changing the rules for storefronts along upper Market Street between Castro Street and Octavia Boulevard.

The Board of Supervisors gave their second and final approval to the changes last month, and Mayor London Breed signed the ordinance Friday, August 9. It will take effect September 8.

The solution, Hamer wrote, is "to increase the pie" with more foot traffic, citing the spate of residential building in neighborhoods such as Hayes Valley, South of Market, and Dogpatch. The addition of anchor stores in the upper Market area, such as an Apple or a community market-like Gus' would also help, he said.

"I've communicated these issues to the district supervisor [Mandelman] so he could be fully aware of a small business' feedback regarding the neighborhood," Hamer said in the phone interview.

"I love and adore the Castro district. I am so afraid that it may go away and disappear forever if something isn't done, sooner, rather than later," he said.

"Right now there is no plan to revitalize the neighborhood to the gem it once was," he added.

Masood Samereie, Castro Merchants president, wrote in an email to the B.A.R. that he "respectfully disagrees" with Hamer's characterization that the district doesn't have a revitalization plan. Hamer is a member of the merchant group.

"Whether referring to the current level of ground floor commercial vacancies, or 'quality of life' issues on our streets and sidewalks, or other key neighborhood issues, there is much current positive work, involving Castro Merchants coordinating and working together with the Castro/Upper Market Community Benefit District, other neighborhood and community groups (Eureka Valley Neighborhood Association, Duboce Triangle Neighborhood Association, etc.) working closely and regularly with Supervisor Mandelman's office, San Francisco Police Department's Mission Station, and multiple other appropriate city agencies and departments," he wrote.

Samereie added, "The issues/problems that we address (and solutions to improve them) are not exclusive to the Castro/Upper Market neighborhood; they are (unfortunately) shared with many other neighborhoods and merchant corridors in San Francisco."

In a text to the B.A.R. Friday morning, Mandelman wrote that it was "heartbreaking" to see small business owners struggling to survive.

"We have been trying to make it easier for new businesses to fill vacant storefronts (and I hope that will pay off for the neighborhood over time), but that's cold comfort to existing businesses trying to make the math work with high rents and labor costs and declining foot traffic," he wrote.

Hamer said he would make a final decision about Finn Town's future by the end of the month.