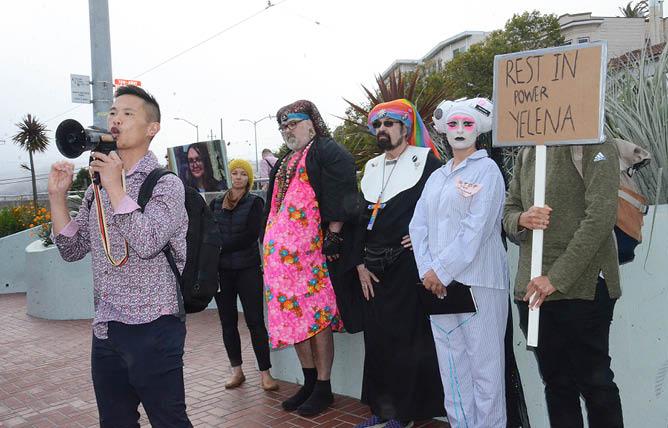 Grigoryeva, 41, was found dead with multiple stab wounds close to her home the night of July 20. Days before her murder, she received multiple death threats, which she reported to the police. According to reports, police took no action.

It appeared a bounty was put out on her via a Russian anti-LGBT blacklist.

Thursday evening about 20 protesters, including members of the Sisters of Perpetual Indulgence and representatives of elected officials, gathered at the plaza. They held signs with pictures of Grigoryeva and that those that stated "Rest in Power, Yelena" as they called upon Russia to bring perpetrators of the reported LGBT hit list website and Grigoryeva's killer to justice.

The demonstrators also decried violence and the erosion of LGBT rights in Russia and the United States' relationship with the country.

Carley McCarthy, 28, a Jewish queer activist and filmmaker who organized the rally, said she wanted "to recognize that this is a loss in our queer family even if they are miles and seas away."

According to media reports, Russian police detained a suspect in Grigoryeva's killing but dropped the charges after arresting a second person July 31. That man's name was not released.

It's unclear if her murder was connected to her activism, the death threats she received, or if it was a hate crime.

"I'm very skeptical and I think that we all should be, and we should all be questioning what they say," said McCarthy, referring to Russian authorities.

McCarthy said she felt the call to mobilize and use her voice and privilege of assembly and free speech. She quoted activist Adam Eli, who runs a group called Voices4, saying, "Queer people anywhere are responsible for queer people everywhere."

"I feel there is a very clear connection [to the] violence and persecution of gay and trans people in Eastern Europe and Russia and the way that we are persecuted here in the United States," McCarthy said. "If we do not address what is going on there, we are not addressing the threat of it here."

Tom Temprano, 33, a legislative aide to gay District 8 Supervisor Rafael Mandelman and the vice president of the City College of San Francisco Board of Trustees said, "There is a connection that should alarm every LGBTQ person in America."

"I think that it's really important to draw a connection between what politicians are saying and the hate-filled laws that we are passing and the actual violence that is perpetuated on people in our streets because of what elected officials and leaders are saying," Temprano, a gay man, told the handful of activists that came out for the rally and curious commuters who stopped to listen as they exited the Castro Muni station. "There's an absolute and direct correlation between Russia's anti-gay propaganda laws, Russia's allowance of state violence and rounding up of queer people in Chechnya, and the murder of Yelena on the streets of Russia."

The U.S. embassies in Russia and Germany have called for an investigation into Grigoryeva's murder and if it was related to her work as an LGBT activist.

Temprano was joined by Farris Peale, who is nonbinary and represented gay state Senator Scott Wiener's (D-San Francisco) office, and Jeffery Kwong, a gay man who is on the board of the Harvey Milk LGBTQ Democratic Club.

"It's important that we mourn, but also that we get angry and that we get active. We've got about a year and change to make a real impact on the trajectory of what life for queer people here in America and around the world will look like," Temprano said, referring to next year's presidential election in the U.S.

AllOut has launched a petition calling upon Russian officials to bring justice to those behind the anti-LGBT blacklist. To sign the petition, visit https://action.allout.org/en/a/saw/?akid=35253.604120.VaYa8.