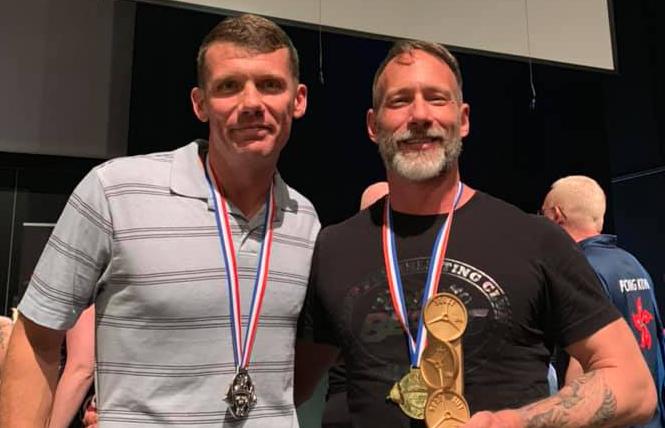 The LGBT Powerlifting Union, having just completed its third world championship meet in Blackpool, England, has announced that it will hold a series of stakeholder consultation meetings the rest of 2019 to discuss several issues affecting queer powerlifting; the impact of mainstream rules on next year's LGBT championships as well as the 2020 Gay Games; and transgender inclusion in the sport.

In no sport has transgender inclusion been a more controversial issue than in powerlifting. The sport, essentially a controlled competition of power versus power, has for years been riddled with the use of performance enhancing drugs, or PEDs, among recreational and elite lifters alike, leading mainstream organizations to adopt strict no-drug policies. Caught in the crosshairs of those policies are transgender men who take testosterone as part of their maintenance treatment, and transgender women, some of whom many lifters think have inborn physiological advantages and others of whom may take other medications that are on the banned-drug list.

Battle lines get drawn, human rights arguments are countered with concepts of fair play versus artificially enhanced performances, and civil discussion devolves into divisive debate. The stakeholder meetings are an apparent attempt to get people to share viewpoints, express concerns, and resolve differences.

The stakeholder discussions mirror the conversations held in 2004-05 among sports organizations in the Federation of Gay Games to see how the desire for fair play and the mission to provide inclusive participation opportunities should affect Gay Games policies, with separate anti-doping policies being adopted in wrestling, powerlifting, and bodybuilding depending on their sports-specific issues.

Charlotte Wareing, co-president of the LGBT Powerlifting Union, is a transgender lifter who has won seven world titles.

"We believe that athletes, coaches, officials, organizations, and spectators all have a deep interest in ensuring that sporting competition remains fair and inclusive," Wareing said. "The LGBT Powerlifting Union has a strong tradition of bringing new lifters into the sport and we believe this is due to our commitment to openness, fairness, and inclusivity within competition — regardless of a person's sexuality or gender.

"The LGBT Powerlifting Union invites all those interested in the development of LGBT powerlifting to contribute to the stakeholder consultation," she added.

The deadline for inclusion in the consultation process is October 31, she said.

Powerlifting had been part of every Gay Games until Paris elected not to include it for last year's event. The desire to reestablish a place for the sport in the Gay Games led to the formation of the union. It held its first international championship in 2017 with just 20 lifters, and then held the second event last year just before Gay Games Paris, drawing 40 competitors.

This year's championships drew a reported 50 lifters from countries such as Great Britain, Australia, Belgium, Ireland, Germany, and Romania for the July 19-21 event. The championships included a third gender category, MX, to enable participation of gender fluid, intersex, and transgender participants.

"This year's event saw national and world record standard performances, a visit from the Lady Mayor of Blackpool, and even a marriage proposal during the medal ceremonies," LGBT Powerlifting Union co-president Chris Morgan said. "The atmosphere was electric, with lifters of all abilities taking part, from novices through to national and world standard lifters — all coming together and creating a magical experience together. We are absolutely delighted with the overall growth in the championships and are now focused on improving on this again in 2020. We have come a long way in a short space of time."

Stakeholders interested in participating in the discussions can email Wareing at chazwrng@netscape.net or Morgan at chunky@chunkymuscle.com.