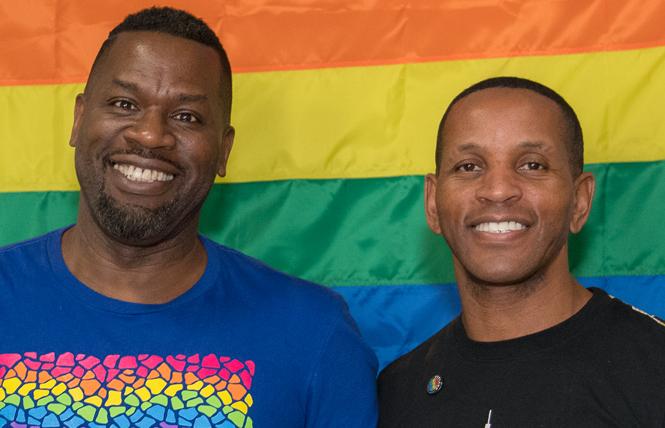 The Oakland LGBTQ Community Center received a $100,000 grant from the city of Oakland and is soon expected to ramp up offerings for youth.

CEO Joe Hawkins, in a recent letter to the editor to the Bay Area Reporter, wrote that the Oakland Fund for Children and Youth Planning and Oversight Committee had recommended the community center receive the funding. The City Council approved the grant June 18.

"Our center applied under the Positive Youth Development & Leadership Funding Strategy, with the Oakland Fund For Children and Youth (OFCY), for the FY 2019-2022 grant cycle," Hawkins explained via email.

The application was approved and the awarded grant brings in $100,000 for the two-year budget cycle, a meaningful sum for an organization with a yearly budget of around $150,000, according to its website. The grant is renewable for up to three years and allows the center to serve youth from 15-21 years of age.

When asked what this grant will make possible, Hawkins had concise plans.

"This grant will allow us to hire a full-time youth coordinator (our first full-time staff person), who will be responsible for conducting outreach to LGBTQ youth, offer case management and linkages to community resources, manage our youth drop-in program and implement our life-skills training modules," Hawkins, who has volunteered his time since the center was created, wrote.

He added that the training modules include learning how to get into college or vocational trainings, how to create a job resume, how to create a personal budget, how to find and interview for shared housing, conflict resolution, and other workshops specific to LGBTQ youth.

"[This training will also] include 'Know Your Rights' workshops on how to deal with bullying, discrimination, abuse, and how to report a hate crime. The grant will also allow us to issue free bus passes to youth and help provide food for group meetings," Hawkins wrote.

Hawkins' letter was responding to a recent B.A.R. editorial, as well as comments from former Our Family Coalition Executive Director Renata Moreira, regarding a dust-up between the agencies during Oakland budget hearings. In his letter, Hawkins accused OFC staff of stating at a public meeting that the center doesn't provide youth services. Moreira had denied that she made the comment that OFC is the only LGBTQ family organization providing services in Oakland after Hawkins originally accused her of doing so in an open letter.

Vanja Abena, a 33-year-old heterosexual individual in the East Bay who uses no pronouns, shared experiences of the center with the B.A.R. via direct message.

"I've volunteered there from time to time. It's a wonderful organization. Joe, Jeff, and Kin Folkz have put in a lot of work to have a space for Oakland LGBTQ population to have a center where they're able to get support and resources," Abena said, referring to Jeff Myers, the board president and center co-founder and Folkz, an Oakland-based genderqueer woman, artist, and advocate.

Folkz and Myers did not respond to requests for comment.

Outside of city funding, the center received some corporate support for its programs.

"We also received a $7,500 grant from the Wells Fargo Foundation to provide food and transportation assistance to participants in our youth program," Hawkins added, noting that this funding addresses some of the most immediate needs faced by young members of the community.

These developments represent a major change from where the center was in January 2018. Faced with freshman budget woes and a space rental that suddenly doubled to $9,000 a month, Hawkins and Myers had to scramble to keep the center in existence.

Dedicated to the importance of an LGBTQ gathering place that was run both by and for people of color in the East Bay, Hawkins and Myers devised a way to rent out smaller offices in the building to other organizations to stay afloat. Creative solutions and careful planning have paid off, and the group is looking forward to a more secure and productive future.

Asked how soon this grant money could affect the center's offerings, Hawkins was confident that change is just around the corner.

"July is our start-up month and we plan to hire our new youth coordinator by the end of this month," he wrote in late July. "The official launch of the program will be during the month of August."

To learn more about how the Oakland LGBTQ Community Center serves the community, visit www.oaklandlgbtqcenter.org .