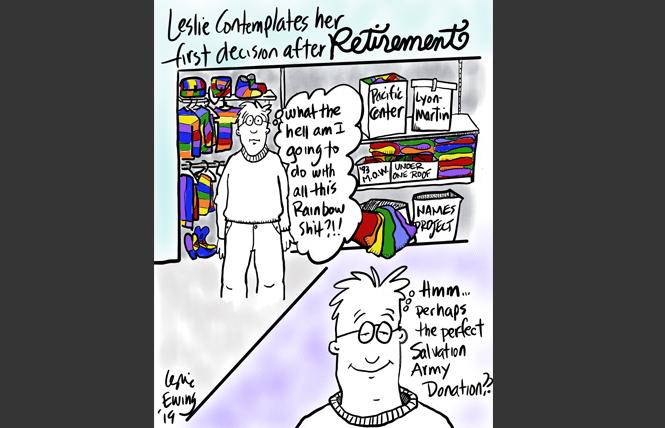 Ever since I announced my retirement from Pacific Center, people have been asking, "What's next?"

It's kind of driving me to distraction, since I think the whole point of retirement is not to worry about "what's next." However, contemplating retirement has brought forward thoughts about the past and the future ... sometimes all muddled together. Because my activism started during the HIV epidemic, I am painfully aware that retirement is a privilege denied to many of my queer generation. But, it is time. I am 70. And as a semi-professional-activist-aging-in-place, I can't help but think of what's next for us, not just me. I'm trying to figure out how to remain at the table without having to always be part of the conversation.

At an event in Berkeley recently, Ben Barr mentioned the Stonewall "controversy" about who threw the first brick. He said the real question should be "Who will throw the 99th brick? Who will finish it?" Thirty-plus years ago, it was easier to discriminate against us because heterosexual people could claim they didn't know any gay people. Nobody can say that today. However, as the boomers of the "Great Queer Coming-Out Era" all know, it won't be one of us throwing the last brick. That day is too far in the future.

The LGBTQ social justice movement did not start with Stonewall, or Compton's Cafeteria, or any other singular event. While these catalytic events compelled people to respond to a crisis, it's mostly been our national network of regional organizations that has made the difference in not only creating, but also sustaining, a social justice movement. I've been involved with a lot of these efforts over the years: The NAMES Project, 1993 March on Washington, AIDS Emergency Fund, Breast Cancer Emergency Fund, Under One Roof, Lyon-Martin Health Services, and Pacific Center. All of these organizations were founded and initially run by volunteers.

And, who volunteered in response to those catalytic events? Who had the privilege of spare time? Who had discretionary income to launch community response efforts? White people, mostly. We didn't even notice that we were the only ones in the room. We had fires to put out. Everyone who walked through the door was welcome, but we didn't know how to engage anyone we didn't already know ... which introduced the friends-and-family quagmire we still see on boards today. The movement of 30 years ago didn't create much more than a crisis response manual for future generations. It's mostly still that way.

Meanwhile, LGBTQ people of color had always been on the frontlines of social justice movements, both within the LGBTQ community, and outside it. In the mid-1990s, community foundations finally recognized this by supporting the emergence of LGBTQ organizations led by, and for, people of color. However, the price of these initiatives often was further marginalization of non-white LGBTQ voices within the community-at-large.

In 2019, there is ample proof that mainstream LGBTQ organizations still don't have a clue about how to address the intersections of race and equity that exist in their real-world LGBTQ communities. I think one reason is because mostly well-meaning white people, like me, have been running these organizations for decades. I realize that it takes a lot of nerve to implore LGBTQ organizations to deal with their institutional racism as I (a white cisgender lesbian) am taking my final bow. All I can say is that I promise to remain committed to this work even if I am not the one who can lead it.

So, here are some suggestions for how we can do better and how today's leaders can start.

1. There is nothing to be gained by being afraid of each other. Today's leaders (even the ones who've never been really sure they are leaders, like me) need to get over their fear of making a mistake and start the dialogue about the intersections of race, class, and inequity. Our organizations need to model the behavior we wish to see in others.

2. Pushback is not a threat. It means the ship is moving. This is what you want, after all. And, yes, it is sometimes personal. You are moving too. It may hurt. Keep moving through your discomfort. Just keep moving.

3. Change starts by doing everyday things differently. Change hiring and promotion practices. Establish a director-level position for equity and inclusion work. Make a place at the decision-making table for this person. Integrate equity and inclusion into all leadership development programs.

LGBTQ nonprofits should make a permanent financial commitment to support intersectionality and inclusion.

Insist that ongoing training for board members and staff be included in the budget. This can't be fully accomplished without help, however. Foundations that fueled marriage equality efforts years ago (and have remained tethered to advocacy) now need to support the intersectional capacity of organizations connected to the LGBTQ movement. This means increasing funding to organizations led by LGBTQ people of color, and helping mainstream LGBTQ organizations make diversity and inclusion a priority in staffing and mission.

And, who will throw that 99th brick?

Only time will tell. I think it will take all of us to get there. I think we can do this!

Leslie Ewing is stepping down from the Pacific Center in Berkeley this month. For more information about the center, visit http://www.pacificcenter.org.