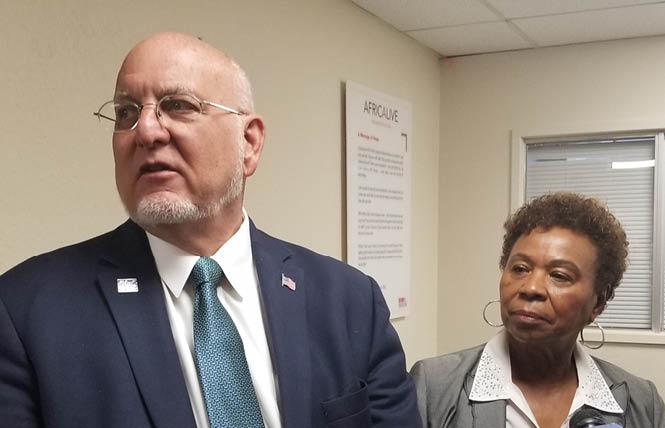 Alameda County is one of eight in California and 48 in the nation that ranks among those with the highest burden of new HIV infections.

Women Organized to Respond to Life-threatening Diseases, an Oakland organization dedicated to improving the lives of women and girls affected by HIV, hosted an event Friday to discuss how Alameda County-based services can use this funding, and led a short tour of the AIDS Health Services' facilities just across the street.

Centers for Disease Control and Prevention Director Dr. Robert R. Redfield and Congresswoman Barbara Lee (D-Oakland), who co-chairs the Congressional HIV/AIDS Caucus, were on hand for the tour and to talk about how this funding will be broken up and disbursed.

Carla Dillard Smith, interim executive director of WORLD, said that Alameda County is going to be the first county to wipe out HIV. Key to achieving that goal, she said, is increasing the use of PrEP, the once-a-day pill that widely protects against being infected with the virus if taken as prescribed.

"There has been no provision for education of women around PrEP," said Smith, referring to the long-existing gender gap in HIV prevention. "And WORLD is currently enrolling and navigating, particularly people who are high-risk for HIV, for PrEP. And we look forward to working with Congresswoman Lee and Dr. Redfield with a focus on those who are most affected. We want to include in the plan education which will reach our community-based organizations who can work together to make this happen."

Alameda County averages 245 new HIV diagnoses per year, according to a public health department study from 2015-2017. This number has decreased 3% per year since 2006 according to the CDC, but is still in the upper ranges of any county in the nation. In the county, 88.4% of new diagnoses are men, so most services are attuned to that demographic. WORLD addresses an underserved population.

Lee and Redfield addressed a small group assembled from WORLD employees, administrators, and clients during a brief news conference.

"This effort is connected to the United Nations Sustainable Development Goals" to end HIV, said Lee, addressing questions about what was local in this effort versus what was national or global. "But this is a new initiative, announced during the State of the Union. The CDC and our civil servants who have worked on this for years and years are really the implementers of this plan, and as an appropriator, it's my job to ensure that we get new money, and enough money to really make this effective."

Lee explained how this funding would be different.

"This is historical, in terms of where the money is going. Historically, this kind of funding has gone to the states," Lee said. "This funding is going county to county. Alameda will submit its own proposal with input from WORLD and from all of our community-based organizations. So that will go from the county to the government, without going through the state or any other fiscal entity."

She said that was "extremely important for the programs and the innovations at the grass-roots level now to be included in the Alameda County plan."

Lee's office followed up with exact figures for this federal funding. According to the office, $140 million has been allocated to the CDC to fund these 48 counties across the nation, with another $50 million earmarked for community health centers. This funding also includes $70 million for the Ryan White HIV/AIDS Program, which offers medical care and support in 50 metropolitan areas, including San Francisco and Alameda counties.

AIDS 2020
Lee also talked about the International AIDS Conference that will take place in San Francisco and Oakland in July 2020. Lee, who has authored or co-authored every major bill introduced in the House about HIV and AIDS since the beginning of her tenure in 1998, said she is "likely to attend."

CDC officials said Friday that the agency plans to take part in next year's conference, but Redfield did not answer whether he will attend himself when asked by the media.

As the B.A.R. has reported, some global HIV advocates plan to protest the decision to have the AIDS conference in the U.S. by holding an alternative meeting in Mexico City July 5-8 next summer. They had called for organizers of the Bay Area confab to relocate it outside of the U.S. due to the Trump administration's discriminatory policies not only toward the LGBTQ community but also immigrants, Muslims, and sex workers.

Redfield said he came to Oakland this week to "listen and learn."

"I've been looking at the jurisdictions that were selected," he said. "And those jurisdictions represent more than 50% of all new diagnoses in America. We have over 3,000 jurisdictions, so it's a very concentrated epidemic of HIV right now. When the president announced in the State of the Union this initiative to target those 50 jurisdictions, of which Alameda County is one, the idea was for each jurisdiction to develop their own plan."

There was no due date discussed in connection to these submissions.

When asked how organizations in Alameda County address HIV rates among the homeless, Smith said, "You have to put feet in the street. You have to get down on the ground. You have to go to encampments. And you have to link the services with clinics and community organizations. It's about building a relationship."

Dr. Nicholas Moss, director of the HIV and STD division of communicable disease control and prevention for the Alameda County Public Health Department, spoke after the Q&A, saying he was honored to have such high-profile visitors with whom to share the county's needs.

"Alameda County is different from San Francisco, but we are close colleagues and we work with each other," Moss said. "We all need more resources and we're excited about this federal initiative to help get us there."

Moss denied that Alameda lagged behind San Francisco in prevention of HIV, redirecting his answer to underline the efforts that he believes make a difference. Although San Francisco, which reported 221 new cases of HIV in 2017, is also listed as one of the endangered counties to receive this funding, the city's rates of PrEP adoption are ranked better in the CDC's reporting than its East Bay counterparts.

When asked about the effects of the federal government's effort to ban certain terms in CDC publications or outreach, including "fetus" and "transgender," Moss was unable to respond. (Redfield had left the room.)

"We are violently opposed to that approach," she said. "WORLD aggressively serves both cis and transgender women. Given the data, the epidemiology of how trans people are so disproportionately affected, we're so excited about the initiative to end AIDS. But then we cringe about the particular statements, which run totally counter to what we're trying to accomplish. We cringe at not recognizing transgender people, just the inhumanity of it. But the reality is that for us to help them, we have to have funding and services."