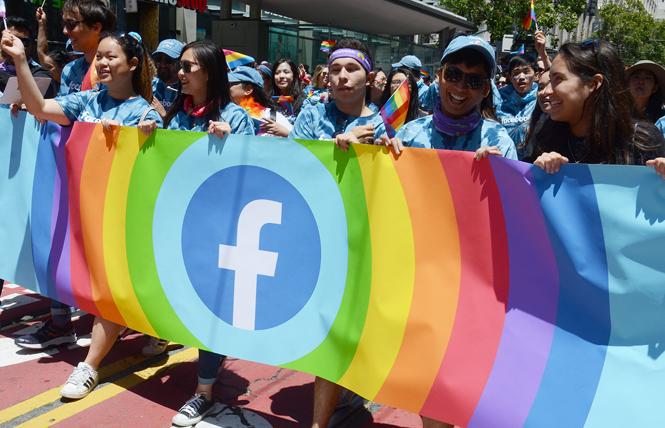 Another Pride, another year of people expressing frustration about the large corporate presence at the parade. Like many others, I'm tired of companies that engage in "rainbow washing" by slapping Pride flags on merchandise and ads in an attempt to profit from the LGBTQ+ community without actually doing anything to help the community.

But our frustration with companies that exploit Pride should not blind us from recognizing that some businesses have taken significant steps to support LGBTQ+ equality, including by taking our side in key U.S. Supreme Court cases addressing our rights. Indeed, just two days after this year's San Francisco Pride parade, 206 businesses filed an amicus brief in the pending Supreme Court cases that will decide whether federal law prohibits employers from discriminating against LGBTQ+ workers — a crucial issue, given that the majority of states provide us no protections against employment discrimination. The brief proclaims that these 206 companies "support the principle that no one should be passed over for a job, paid less, fired, or subjected to harassment or any other form of discrimination based on their sexual orientation or gender identity."

This is not the first time that a coalition of businesses has filed amicus briefs in Supreme Court cases involving LGBTQ+ equality. Similar briefs were filed in 2013 in the case challenging Proposition 8 (Hollingsworth v. Perry, which was decided on procedural grounds and did not address the merits) and the successful challenge to the federal Defense of Marriage Act (U.S. v. Windsor). And 379 small and large employers were on the right side of history when the Supreme Court ruled in 2015 that the U.S. Constitution mandates marriage equality (Obergefell v. Hodges).

We may never know how much influence these types of briefs have on the outcome of cases. And there is reason to be concerned about the pending cases seeking to prohibit discrimination against LGBTQ+ workers, given that Justice Anthony Kennedy (who was the swing vote in our favor in the key cases on LGBTQ+ equality) has retired and two Trump appointees have joined the court. But we do know that Supreme Court justices are far more familiar with, and attuned to, corporate interests than the interests and experiences of our community. And the current brief should get the court's attention. According to the brief, the 206 businesses "collectively employ over 7 million people, and comprise over $5 trillion in revenue." This is power speaking to power. It could make a difference.

Although the corporations that have signed on to these amicus briefs have made significant contributions to the fight for LGBTQ+ equality, that does not immunize them from criticism — just ask Google. Some of Google's own employees demanded that the company be barred from this year's parade due to inadequate policies and practices on issues such as harassment and hate speech directed at LGBTQ+ people on Google-owned YouTube. But the businesses' participation in amicus briefs certainly distinguishes them from the rainbow washers.

Some people — like the small group that shut down this year's parade for about an hour — appear to object to any corporate presence at Pride, regardless of what a company has done for the LGBTQ+ community. Given the hundreds of thousands of people who now participate and watch the San Francisco parade, it's hard to imagine we could ever turn SF Pride back into the kind of marches that happened after riots at Compton's Cafeteria here and the Stonewall Inn in New York City. And since the 2016 election, SF Pride has made an effort to highlight activism by having resistance contingents follow Dykes on Bikes at the beginning of the parade. For those who want even more, the Dyke March and Trans March are largely of and for the people.

If we are going to continue to have a corporate presence at Pride, I hope that the SF Pride organizers question the business participants about what they have done for the community and make them aware of the community's expectations that they take concrete steps to support equality. Of the many companies that marched in the parade this year, more than 25 signed onto the recent amicus brief in the employment discrimination cases. Some of them had also participated in one or more of the earlier marriage equality briefs, including Amazon, Apple, CBS, Cisco Systems, Comcast, eBay, Facebook, Google, Intuit, JPMorgan Chase, Levi's, LinkedIn, Microsoft, the SF Giants, Salesforce, Starbucks, The Walt Disney Co., and Wells Fargo. Businesses may offer support in other ways as well, including by funding organizations working for LGBT+ equality. I don't begrudge having true allies in the parade.

But I have no use for rainbow washers that exploit our community. As consumers, when we see businesses wave Pride flags and decorate with rainbows in June, we should ask them what they've done to support LGBTQ+ equality the other 11 months of the year. And if they haven't done anything, we should ask them to step up or spend our money elsewhere.

Ruth Borenstein was a party in the lawsuit that asked the California Supreme Court to invalidate Prop 8 (Strauss v. Horton). She marched with Brady United Against Gun Violence in the resistance contingent in this year's Pride parade. The brief from the 206 businesses, with a full list of the amici, can be found at https://bit.ly/2YVx1R6.