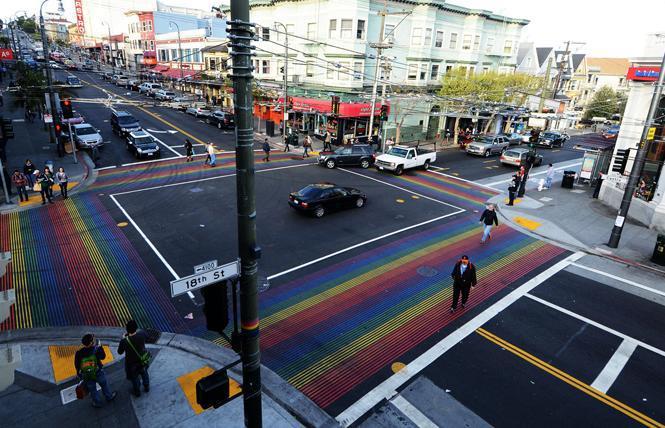 The Board of Supervisors gave final approval this week to the creation of the Castro LGBTQ Cultural District. Photo: Rick Gerharter

The San Francisco Board of Supervisors gave its final approval Tuesday for declaring the Castro neighborhood the city's third LGBTQ cultural district. Mayor London Breed is now expected to sign the ordinance into law, allowing proponents of the designation to apply this year for a portion of the $3 million the city has set aside for use by cultural districts.

The unanimous vote at the board's July 9 meeting had been expected, as the supervisors had already approved creating the cultural district at their June 25 meeting. One of the first steps toward seeing it come to fruition will be the creation of a Cultural, History, Housing, and Economic Sustainability Strategy for the district by the Mayor's Office of Housing and Community Development. The report must be completed by June 30, 2021.

The city's two other LGBTQ districts are in the Tenderloin, focused primarily on the transgender community, and South of Market, created to preserve the area's leather culture. Assistance for ensuring the viability of the trio of LGBTQ districts is a key component of the LGBTQ+ Cultural Heritage Strategy that the city is expected to adopt this year.

The heart of the Castro LGBTQ Cultural District is centered along the 400 and 500 blocks of Castro Street as well as the surrounding residential area. The district's boundary also stretches down the neighborhood's commercial corridor along Market Street to Octavia Boulevard where the LGBT community center is located.

Gay District 8 Supervisor Rafael Mandelman was the lead sponsor for the Castro cultural district, while the GLBT Historical Society has been one of the main community groups advocating for its creation.

As Mandelman stated last month following the board's first vote to establish the district, "I am proud that this ordinance will allow the Castro to access critical resources to support the small businesses, non-profits, cultural institutions and people that make the neighborhood the heart of our city's LGBTQ community."

Supes to take up Castro zoning changes
The supervisors this month are also set to approve a series of zoning changes along Market Street aimed at helping to fill ground floor retail spaces between Octavia and Castro streets. Mandelman has spearheaded the proposal since taking office last July.

As the Bay Area Reporter has previously noted, the changes would pave the way for arts uses and community-serving nonprofits to lease out sidewalk-facing storefronts without the need for a conditional use permit. Stores and restaurants selling only beer and wine would also benefit from a relaxation of the permits they would need to receive prior to opening along upper Market Street.

At the same time, for-profit health care clinics would face tougher hurdles to opening along the corridor. Whereas now they do not need to seek approval from the city's planning commission in order to open, such businesses would be added to the city's list of formula retailers who are required to seek a conditional use permit prior to opening their doors on upper Market Street. (It could be the first step toward seeing such restrictions be applied citywide on the businesses.)

Due to a number of amendments Mandelman made to the proposal, the supervisors' land use and transportation committee voted only to accept the changes at its meeting July 11. It postponed taking a vote on recommending that the full board adopt the changes to its July 15 meeting.

"Retail vacancies are a problem in upper Market," Mandelman noted at the hearing.

Pointing to a report released in March by the city's budget and legislative analyst that found it takes a year for most businesses in the commercial corridor to secure their permits from the planning department, Mandelman said that "overly restrictive zoning is partly responsible for this growing problem."

In light of people's changing retail habits and the high cost of doing business in the city, Mandelman said there is a "dire need" to update the zoning along upper Market Street.

"We ought to be doing everything we can to help attract businesses and help them open as quickly as possible," he said.

Tom Radulovich, a gay man who is executive director of the nonprofit Livable Cities, praised Mandelman at the hearing for the zoning update he and his office had created following months of meetings with Castro business leaders and residents.

Once the land use committee votes on the proposal, the full Board of Supervisors will need to vote on it twice before it is sent to Breed for her sign off, likely in early August.

Gay SF GOP chair resigns
Jason P. Clark, the first openly gay person to be named chair of the San Francisco Republican Party, has resigned from the political post due to accepting a position with the U.S. Department of Commerce. Clark, who is moving to Washington, D.C. for the job, also resigned as the Bay Area regional vice chairman at the California Republican Party.

A longtime leader in the Log Cabin Republicans political group for LGBT GOPers, Clark in 2012 unsuccessfully ran against gay former state Assemblyman Tom Ammiano (D-San Francisco) for his legislative seat. Clark took over as chair of the San Francisco Republican Party in June 2016, having served on the local GOP central committee since 2011.

"It has been an honor and privilege to work with so many Republicans here in San Francisco," Clark wrote in a recent email sent out by the local party. "Living in one of the nation's most liberal cities, it can be hard to get up, get out, and advocate for what's right and ideas to make our city work. I know our next chair will be excited to continue our work through 2020."