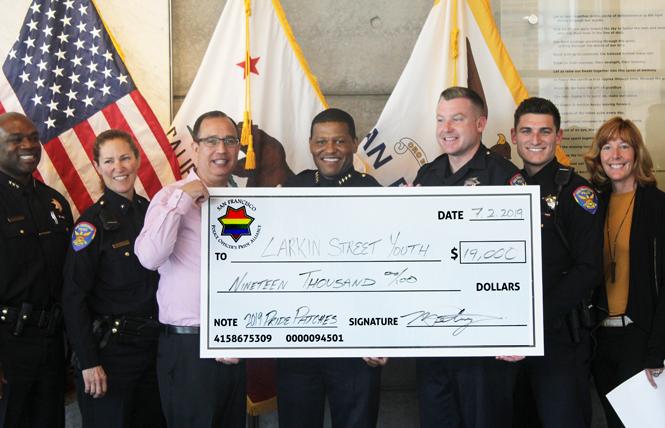 The funds were raised through sale of the rainbow colored Pride patches, shirts, and lapel pins. During Pride Month in June, approximately 200 sworn members of the department wore the patches on their uniforms, Civilian SFPD members sported the Pride shirts and lapel pins.

According to a news release, the project was organized by the SFPO Pride Alliance and unanimously approved by the San Francisco Police Commission. It was developed to show support for the city's LGBTQ communities and highlight the inclusiveness of SFPD. According to the release, department members hoped to encourage positive conversations and inspire other law enforcement agencies to partner with local charities that support LGBTQ communities.

Larkin Street provides a continuum of care for young people, including queer youth with drop-in centers, medical services, and housing.

"We at Larkin Street Youth Services are appreciative of the support from the San Francisco Police Department, whose Pride Patch program generated thousands of dollars to fund much-needed housing, education, health, and employment services for young people experiencing homelessness in our city, a population in which LGBTQ youth are vastly over-represented," Sherilyn Adams, Larkin Street executive director, said in a statement to the Bay Area Reporter.

SFPD officials said that approximately 1,800 Pride patches were sold. The patches were also sent to and worn by law enforcement members and military members in the United Kingdom, Canada, and Australia. According to the release, 10 other law enforcement agencies have reached out to the SFPO Pride Alliance for suggestions on how to launch similar projects.

The Pride patches were somewhat controversial when they were announced. Gay Shame claimed responsibility for stenciling "Police out of Pride" graffiti in the Castro this spring. During the parade, a group halted the parade for 50 minutes in part because of their dissatisfaction with the SFPD contingent in the march.

SF library hosts TAY exhibit
Clients of the aforementioned Larkin Street Youth Services are in an exhibit, "Creating Resilience," that looks through the lens of transitional age youth, or TAY, and will be hosted by the San Francisco Public Library's TAY(k) Care program.

It opens Saturday, July 13, at the main library, 100 Larkin Street, on the third floor.

According to a news release, the works demonstrate the dedication, leadership, and self-determined artistry of some of Larkin Street's most advanced participating artists, who take part in the program as a means for self-expression and toward career-track employment.

There will be an exhibit celebration Thursday, August 8, at 5 p.m. at the main library at the James C. Hormel LGBTQIA Center on the third floor.

The exhibit itself runs through September 19.

Tali Eisenberg with Geter Done Productions, in partnership with Brian Applegarth of the Cannabis Trail, organized the event, which is being held to draw attention to the groundbreaking activism of the LGBTQ community in the development of the modern cannabis industry.

The event includes a screening of Applegarth's 16-minute documentary, "The Secret Story: How Medical Cannabis was Re-Legalized in the U.S.," which is based on conversations he had with the late Dennis Peron, a gay man who helped lead the medical marijuana legalization effort in California.

Sherry Glaser, an actor, comedian, cannabis activist, and founder of the Love In It Cooperative, will emcee the evening. Programming includes storytelling by Terrance Alan, co-owner of Flore cafe in San Francisco; John Entwistle, Peron's surviving partner; Kris Hayashi, executive director of the Transgender Law Center; and other leaders.

Topping off the evening will be a dance party with special guests from the LGBT community.

Organizers said that 5% of the proceeds will be donated to TLC.

People must be 21 or older to attend; organizers said it is a non-consumption gathering.

Tickets are $25; the address will be provided with ticket purchase. For tickets and more information, visit www.cannabispridecelebration.com.

PUFF party
In other cannabis-related news, PUFF, the queer cannabis social group in San Francisco, will hold its first beer bust Sunday, July 14, from 3 to 6 p.m. at the Pilsner Inn, 225 Church Street.

Organizers said that DJ Dank will be on the patio for a fun afternoon with music by DJ Prince Wolf, a kooky drag show, and the stoner raffle. Good Vibrations will bring its "wheel of pleasure" for people to spin for sexy prizes.

There will be a post-walk show, also in Robin Williams Meadow, for all participants after the event. Those who have raised $300 will get access to the VIP lounge for themselves and a guest.

Since 1987, AIDS Walk San Francisco has raised more than $90 million for a variety of Bay Area HIV/AIDS care, prevention services, and advocacy organizations.

UCSF is employer spotlight at LGBT center
The trans employment program at the San Francisco LGBT Community Center invites people to its Job Ready 101 event Thursday, July 18, where they can work on their resume or interviewing skills with recruiters from UCSF.

HRC recognizes S. Bay child advocacy group
Child Advocates of Silicon Valley has announced that it is one of 70 organizations across the country that was recognized by the Human Rights Campaign Foundation for its work with LGBTQ foster youth. The HRC Foundation is the 501(c)3 arm of the national political LGBT rights organization.

Child Advocates recruits, trains, and supports court-appointed special advocates, or CASAs, to work one-on-one with children in foster care, ensuring that each child's needs are met and their voice is heard while navigating the court dependency system.

According to a news release, Child Advocates is included in HRC's "Celebrating Everyday Change-Makers in Child Welfare," a first-of-its-kind report highlighting child welfare agencies in the U.S. that partnered with HRC's All Children — All Families project to improve services they provide to the LGBTQ community, including children in foster and protective care and adoptive parents.

"We are honored to be recognized as a leader serving LGBTQ foster youth, especially at a time when LGBTQ youth are over-represented in the foster care system," Frederick J. Ferrer, CEO of Child Advocates, said in the release.

The agency is actively looking for volunteers. Those interested in becoming a CASA volunteer can visit www.bemyadvocate.org/volunteer for more information.