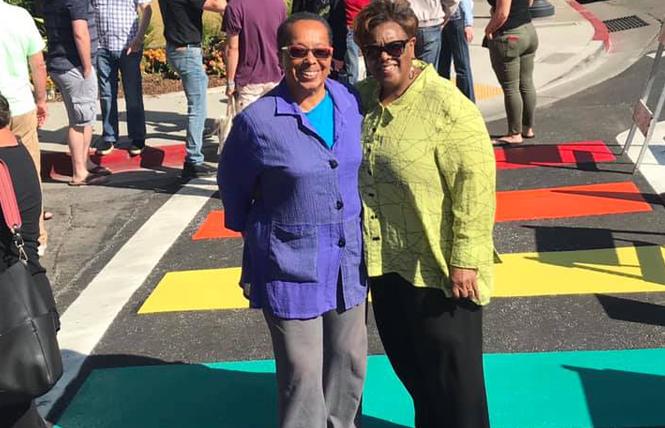 This June numerous cities around the Bay Area displayed their Pride. At first, it wasn't clear this would be the case. The Dublin City Council initially voted not to fly the rainbow flag, resulting in national news coverage and outrage. It quickly reversed itself; and from that moment on, whether intended or not, it touched off a domino effect of Pride proclamations and flag raisings. Cities in Contra Costa, Alameda, Santa Clara, and San Mateo counties voted to fly the flag. The Alameda County building raised a flag. Contra Costa County issued a Pride proclamation. Every single city in Napa County is flying the rainbow flag this month. Rainbow crosswalks were painted in San Leandro. A flag was raised in Tracy, in the Central Valley. San Francisco, of course, has been raising the rainbow flag above City Hall for years. Oakland did it in June and will do so again in September for its Pride parade.

County fairs in San Mateo and Alameda held Pride days for the first time. Children's Discovery Museum of San Jose moved its Family Day from August to Pride Month.
Governor Gavin Newsom had the Pride flag raised at the State Capitol. And while it wasn't the first time, as the Bay Area Reporter noted, it will fly a lot longer than the few hours it did the last time in 1990.

The Pride flag — and all those rainbows — are powerful visual symbols that Bay Area and California cities are committed to LGBTQ equality, especially welcome given the hostility of the federal government. As gay former Santa Clara County Supervisor Ken Yeager notes in this week's Guest Opinion, local government has often been slow to respond to the needs of the LGBT community. Outside of San Francisco, which has led the way on HIV/AIDS policy, LGBT non-discrimination laws, and marriage equality, city and county governments in the region have varying levels of services. All can improve.

Getting community support is critical, especially from our straight allies. And that's why the symbolism is important: by promoting and publicizing LGBT Pride Month, elected leaders are telling their constituents that everyone matters in society, including queer people. These flag raising ceremonies and government proclamations have been widely covered in the media, leading to more awareness by area residents, which allows our issues to be heard, and, ultimately, concrete action taken at the local level.

When a community is welcoming of all its residents, it is more likely to support them. This includes resources for social services, immigrants, housing opportunities, and specific programs for LGBTQs. Transgender people, for instance, face added barriers to employment and housing, which is multiplied for those living outside of urban centers.

Let's not forget that after Pride Month is over, we'll still be here. We need to continue prodding our cities and counties to provide adequate services, address discrimination, and expand access to health care. While politicians around the Bay Area are to be commended for highlighting Pride Month, the real work must not end when the rainbow flags come down.

SFO does Milk proud
After all our haranguing of San Francisco International Airport officials over the past several months, we must commend them for the mammoth temporary exhibit on Harvey Milk that will open to the public next month. At a sneak peek last Friday, we were struck by the scale, which, in light of the fighting between Supervisor Hillary Ronen and SFO leaders, exceeded our expectations. People passing through Harvey Milk Terminal 1 will learn a lot about Milk, the first openly gay man to win elected office in San Francisco and California, and whose life was cut short by an assassin's bullet. The exhibit features oversized images of Milk, his campaign ephemera, newspaper clippings, letters, and news releases.

Ronen, who led the fight for larger signage honoring Milk at the still under construction terminal, was impressed. Gay former supervisor David Campos, who reached a compromise with the late mayor Ed Lee that resulted in Terminal 1 being named after Milk, was also pleased.

Kudos too, to SFO Museum staff for their work curating the exhibit, which memorializes a pioneer of the city's LGBT community. Travelers will come away dazzled.