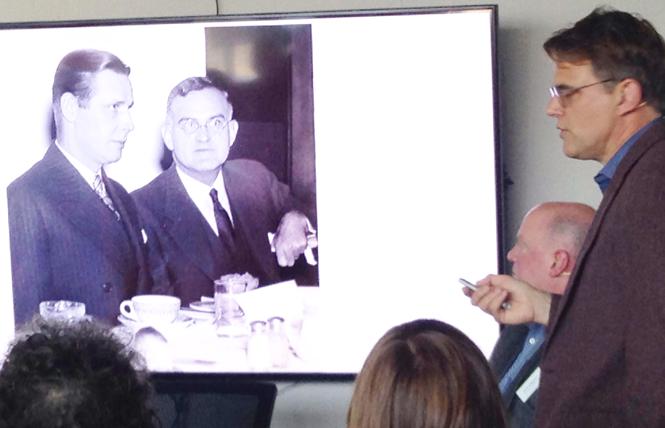 The years during and surrounding Dwight D. Eisenhower's presidency were some of the most socially conservative this country has ever seen.

It was the time of McCarthyism, segregation, and what came to be known as the Lavender Scare, the concern that the gay population was attempting to warp American values. It's hard to imagine that anyone who didn't fit a very narrow prescribed mold would find themself in a position of power. Yet Robert Cutler, a closeted gay man and the subject of the 2018 book "Ike's Mystery Man" by Peter Shinkle, worked for years as Eisenhower's national security adviser and his "right hand man" in foreign policy.

Cutler, known as Bobby to friends and family, is not just some fascination for Shinkle; he's Shinkle's great uncle.

"The topic came up once, and my aunt told me he was gay," Shinkle, an investigative journalist, said during a recent appearance at the Commonwealth Club. "This launched me into a 12-year effort that is this book."

He said that he was provided with a "treasure trove of documents" by Steven Benedict, a man who once worked alongside Cutler.

"Key in those documents were diaries," Cutler said, adding that they confirmed what he had been told.

At a taping of the "Michelle Meow Show" at the Commonwealth Club last month, Shinkle discussed Cutler, the time period in which he operated, and the issue of exposing someone else's secrets.

"The concern was privacy: was I outing him?" Shinkle said. "All my family members said please publish this. No one opposed it."

Still, Shinkle, 58, understood the gravity of what he was uncovering. As a straight man, his sexuality was never weaponized against him, and he never had to hide in plain sight. When asked how he thinks Cutler would feel about this book being published, Shinkle was thoughtful in his answer.

"Given the enlightened view of the present day, I think he would want this story told," he said.

Cutler was from a wealthy and prominent Bostonian family. He was the youngest of five boys, all well-educated and connected. He was someone who was born into a position of privilege (a fact that Shinkle does not gloss over) who occasionally made political moves that were detrimental to the gay community at the time, like his effort to push through Eisenhower's Executive Order 10450, which banned gay people from working for the government in any capacity. The irony of someone unable to live openly while also supporting such a drastic measure is staggering.

"It would have a terrible effect on gay Americans," Shinkle said of the order. "It gave McCarthy his power." 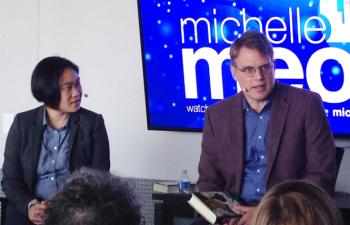 Prominent firing
One of those who was fired under the executive order was gay rights pioneer Frank Kameny. In a 1999 interview with Eric Marcus for his "Making Gay History" podcast, Kameny recalled his shock when government officials told him they believed he was a homosexual. Kameny sued but lost, and became "radicalized," as he told Marcus.

In the 1960s, Kameny and others led some of the earliest public protests by gays and lesbians, working with the Mattachine Society of the East Coast and the Daughters of Bilitis. He staged a picket in front of the White House in April 1965.

The picketing expanded to Philadelphia's Independence Hall, where it was known as the Annual Reminder for gay rights, according to his Wikipedia entry.

In later years, Kameny remained active; he coined the phrase "Gay is Good."

In 2010, he was invited to the White House when then-President Barack Obama signed the repeal of "Don't Ask, Don't Tell," ending the military's anti-gay policy and allowing gays and lesbians to serve openly. 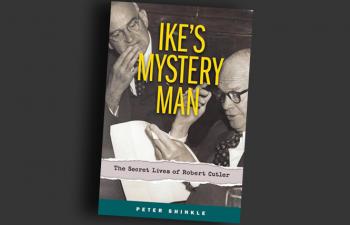 Cutler's mindset
During the Commonwealth Club talk, Meow, a lesbian, expanded on Cutler's possible mindset during his effort to get the executive order signed.

"It truly became a conversation of national security when they were talking about homosexuals," said Meow. "But the culture of gay was already there."

At the time, the construct of sexuality was becoming a hot-button issue with gay writers such as Gore Vidal publishing works like "The City and the Pillar," not to mention scientific pursuits like Alfred Kinsey's studies on the gray area that exists in human attraction. It was an era that oscillated between the cusp of enlightenment and the strictest of expectations, much like Cutler himself.

Eisenhower's legacy is also one of contradictions, like his silence of, and then open opposition to, McCarthyism. According to Shinkle, Eisenhower was someone who had no real concern about how anyone else lived their life.

"There were signposts in Eisenhower's life that he was incredibly tolerant," Shinkle said. "There's no documented knowledge that he knew (that Cutler was gay) but it seems virtually impossible that he didn't."

In all the years they worked together, it was never an issue that was officially raised or mentioned, he noted, adding that Cutler being competent at his job was more important than his sexuality to Eisenhower.

Shinkle insisted that Cutler, a complicated man, did a lot of good with his time in Washington.

"He was someone who was always trying to reach across the aisle, as they say," said Cutler.

When the question of how today's political climate compares with the era of Eisenhower, Shinkle pointed out a similarity.

"Political leaders will find a vulnerable minority and exploit that," he said after a moment of reflection.

Shinkle finds today's social culture much more open, which is its own form of protection; people who are being unfairly targeted have more support from the masses than they did in other times in history.

"I think today's America would find it hard to understand," he said in reference to Executive Order 10450, McCarthyism, and the fact that Cutler's life was lived in secret. "So far have we come in many ways."