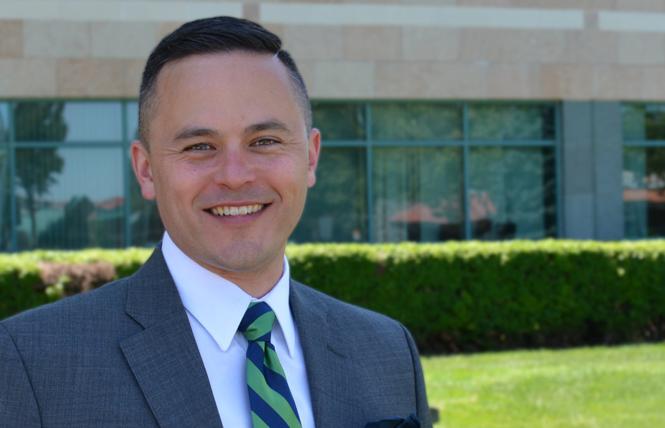 I requested at a recent Dublin City Council meeting that the rainbow flag be flown outside City Hall throughout June to honor Pride Month. My goal was to raise awareness about the progress our LGBTQ community has made and about the important work still unfinished. The subsequent debate — and the decision not to fly the LGBTQ Pride flag in Dublin — are strong evidence that there is much more work to do.

The opinions voiced in response to my request to fly the Pride flag were as varied as the colors of the rainbow, with the vast majority making homophobic and transphobic comments. While some people said they were inspired by my composure in the face of some of the statements made, others criticized me for not speaking out. I can certainly understand some people's disappointment.

However, the sad truth is that I wasn't surprised by the homophobic and transphobic remarks. I have been hearing these types of comments my entire adult life, and generally believe they are relegated to the fringes. I did not want to lend these statements any validity by acknowledging them publicly. It is also my belief that the hard-fought LGBTQ rights we have achieved were at least partially born out of tolerance, not outrage. Through deep empathy and difficult dialogue we have slowly changed public opinion, and we will continue to make progress toward LGBTQ equality by having open conversations that seek mutual understanding, rather than by screaming at each other.

I am also mindful of the second-order effects that polarizing and intolerant discussions have on the most vulnerable in our LGBTQ community. A recent study published in Pediatrics provides evidence that debates around LGBTQ public policy may lead to increased bullying among LGBTQ youth. That is not to say that we must accept abuse or be any less resolute in our demands for equal rights, but we must be mindful that how we speak impacts others.

I grew up in the 1990s. My adult life has been consumed by the battle for marriage equality and serving in the military under "Don't Ask, Don't Tell" and the transgender military ban. Despite this personal history, I consider myself extremely privileged. I was raised in a family that embraces me for who I am. My friends, colleagues, and neighbors have largely accepted me, and I feel very fortunate to say I have never once feared for my own safety because I am gay. Despite the subtle challenges of serving under DADT, I was not discharged or targeted while in the military. Yet, I have witnessed my friends and colleagues being denied their fundamental rights, and pay the subsequent emotional price for that denial.

So, while I understand the struggles of the LGBTQ community, I do not speak for the entire LGBTQ community. With that said, for me, displaying the Pride flag does two things.

First, it represents our LGBTQ history, as a marginalized community and as a distinct subculture. That is why I asked for the council to discuss this at our meeting the day before Harvey Milk Day. It has been four decades since Milk was assassinated, but it has only been four years since the U.S. Supreme Court made marriage equality the law of the land. The LGBTQ community is still not afforded basic anti-discrimination protections under federal law and transgender service members have been stripped of their right to serve openly in our armed forces. There is still major concern for our most vulnerable LGBTQ, including our youth, elderly, and people of color, but especially for our transgender community members. So, it is a storied history of struggle and triumph, but one that still continues to this day.

Second, the Pride flag symbolizes safe haven. Recent studies by Horizons Foundation and the Human Rights Campaign highlight some disturbing realities. Members of our LGBTQ community are not only more likely to suffer from depression and more likely to attempt suicide, but they are more likely to feel unsafe within our own neighborhoods, businesses, and schools. Feelings of physical and emotional safety are a fundamental human need, supporting healthy emotional well-being. While flying a flag does not address all of these serious problems, seeing a flag at a public building, residence, or business sends the signal that LGBTQ people are welcome, embraced, and, most importantly, safe.

When a city or government agency raises the Pride flag, elected officials are exercising their government speech, to send an unequivocal message that they stand in support of the LGBTQ community. As elected representatives we get to decide how we exercise that government speech, and we should do it in a way that uplifts the most vulnerable and marginalized among us. However, raising a Pride flag is just the beginning of what we, as elected officials, must do. In the East Bay suburbs LGBTQ communities are undercounted and underrepresented. Basic services are unavailable or do not attend to the unique needs of LGBTQ people. Government programs for LGBTQ communities are nonexistent or severely underfunded.

Despite the homophobic and transphobic comments, I remain hopeful. After the City Council meeting, members of the community banded together to display Pride flags at their homes, allies organized a Pride flag rally at City Hall, people from across the Bay Area and state wrote in to express their support, and Dublin will soon have its very first LGBTQ Pride Picnic in June. The council did unanimously pass a proclamation declaring June LGBTQ Pride Month in Dublin for the first time in its history, and I'm hopeful that we can still find a way to raise the Pride flag in Dublin.

I call on my fellow elected officials in the East Bay suburbs to raise the LGBTQ Pride flag in June and to continue to discuss, within your communities, how we can identify the needs of our LGBTQ community and address those needs with services and the requisite funding. It is so evident from the recent events in Dublin that we need to continue to have this conversation and that LGBTQ allies play a crucial role in advancing that discussion. It is also evident that, even in the Bay Area in 2019, raising the Pride flag still matters.

Shawn Kumagai is a member of the Dublin City Council.