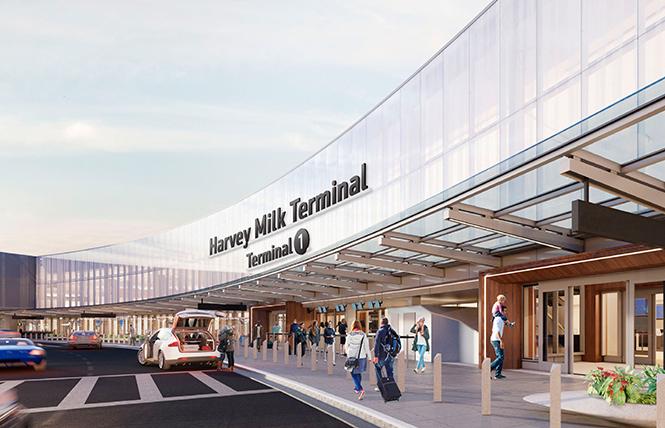 San Francisco International Airport Wednesday released a new image of what the exterior signage for the Harvey Milk Terminal will look like. At the direction of City Hall, the aviation facility is renaming Terminal 1 in honor of the late gay rights leader and the city's first LGBT supervisor.

Timed to coincide with the annual Harvey Milk Day observance, a day of special significance in California each May 22 on Milk's birthday, the drawing shows the terminal facade featuring one oversized sign that reads "Harvey Milk Terminal" above a smaller sign for "Terminal 1."

It comes a month after city officials adopted an ordinance requiring SFO officials to prominently feature Milk's name on all signs for the terminal throughout the airport. The legislative action was in response to images released last fall by the airport that depicted signage in the reverse, with Terminal 1 given more prominence and Milk's name in smaller font type.

And drawings released this March that depicted only one of the terminal's exterior entrances would have signage including Milk's name further angered supervisors and LGBT community advocates. At the time, airport director Ivar C. Satero had explained that SFO preferred using Milk's name as little as possible on the way-finding signs so as not to confuse passengers as they navigated through the airport.

An exasperated District 9 Supervisor Hillary Ronen amended her ordinance to ensure any sign for the terminal uses Milk's name and places it before the usage of Terminal 1. Replacing all of the existing Terminal 1 signs so they feature Milk's name is estimated to cost $1.3 million.

In a series of twitter messages Wednesday, SFO hailed Milk's political achievement in November 1977 and noted that the under renovation terminal "will represent Harvey's passionate work to further equality and acceptance, embodying the spirit of our city. The new Harvey Milk Terminal 1 will feature two exhibitions commemorating his life and legacy."

(3/3) an additional 9 gates will open in March 2020. The millions of visitors who will pass through Harvey Milk Terminal 1 will have an opportunity to learn about Milk and his impact on San Francisco and the world. #HarveyMilkDay
Visit https://t.co/5JXX3nUrjO for more information pic.twitter.com/UDwdYna3Gb— flySFO (@flySFO) May 22, 2019

It included the new drawing for the facade signage, which SFO spokesman Doug Yakel told the Bay Area Reporter is "the revised signage to comply with the amended legislation" and was purposefully released for Milk day.

A temporary installation about Milk will be unveiled in July when nine gates reopen in the new terminal, the first of three domestic terminals and one international terminal at SFO. The SFO Museum also posted a sneak preview Wednesday of the new exhibit debuting this summer.

We're looking forward to the first phase of the #HarveyMilk Terminal 1 opening in July! SFO Museum is presenting an exhibit honoring pioneering LGBTQ+ activist Harvey Milk, who was born #onthisday in 1930 and was the first openly gay elected official in California. #HarveyMilkDay pic.twitter.com/fv0K0PUvIa

Another nine gates will open in March 2020, and with them, a permanent display about Milk located in a pre-security area of the terminal the airport is calling the Central Inglenook.

"The millions of visitors who will pass through Harvey Milk Terminal 1 will have an opportunity to learn about Milk and his impact on San Francisco and the world," noted SFO in its tweet.

After moving to the city's then-burgeoning gay Castro district in the early 1970s, Milk made history by becoming the first out gay person elected to public office in both San Francisco and California in November 1977. Tragically, 11 months after being sworn in as a supervisor he was killed inside City Hall along with then-mayor George Moscone by disgruntled former supervisor Dan White.

The naming honor for Milk at the airport has been an arduous bureaucratic slog, as gay former San Francisco supervisor David Campos, whom Ronen had worked for, first proposed in 2013 naming all of SFO after Milk. When that proposal didn't fly with much of the public, Campos and the late mayor Ed Lee compromised on naming one of SFO's four terminals after the beloved gay leader.

It wasn't until last year that the choice of Terminal 1 was finalized. Along with the permanent exhibit and signage, several art pieces inspired by Milk are also planned for the terminal. The $2.4 billion remodel of the facility is now set to be complete by 2023.

For more information about the project, visit https://www.flysfo.com/about-sfo/airport-development/t1.