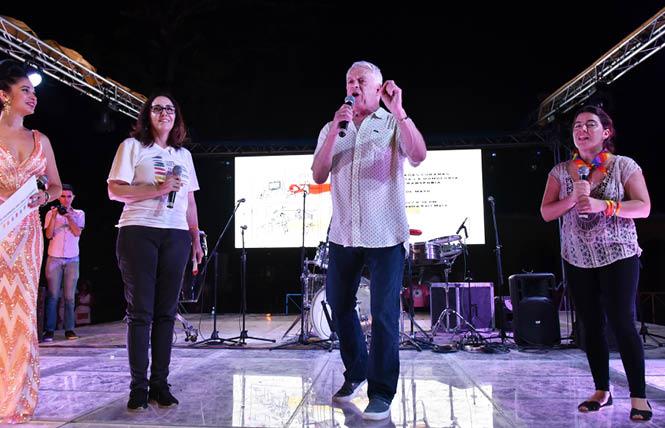 San Francisco AIDS activist Cleve Jones received an award from the Cuban National Center for Sexual Education in Havana last weekend as other activists were reportedly arrested after attempting an alternative march after the government canceled two others.

Jones' visit to Cuba with the San Francisco-based Rainbow World Fund occurred amid increasing tensions; Michael Lavers, a reporter for the Washington Blade, was blocked from entering the country last week after he arrived at the Havana airport and had to fly back to Miami.

Jones received his recognition from Mariela Castro Espin of CENESEX at a May 10 gala. Jones also spoke at an LGBT diversity celebration in the city the next day.

CENESEX organized Saturday's party after the Cuban Ministry of Public Health abruptly canceled two traditional Pride marches, called congas, which were to take place in Havana and the city of Camagüey in central Cuba. Jones was slated to be grand marshal of the Havana event. This would have been the 12th year of the congas.

Responding to the cancellation, around 100 Cuban LGBT activists, many of them waving rainbow flags, took part in an unauthorized march in Old Havana last Saturday afternoon. The spirited but peaceful march lasted about an hour before ending with a small number of arrests.

As the Bay Area Reporter reported last week, CENESEX announced the cancellation of the congas May 6. When the news broke, a delegation from the San Francisco-based Rainbow World Fund — including Jones, photographer Gareth Gooch, and this reporter — was preparing to depart for the island to participate in three weeks of LGBT events known as the Jornada.

In a statement about the cancellation, CENESEX cited international and regional tensions that include escalating threats from the Trump administration and Christian fundamentalists opposing a provision in the revised Cuban constitution to allow same-sex marriage.

The new constitution, which was recently approved by a popular vote, allows marriage between two people without specifying gender, Cubans who work with CENESEX told the B.A.R. The policy will be further developed in a family law revision and referendum.

Unsanctioned conga
Speaking at the diversity party and in a statement on her Facebook page, Castro Espin, daughter of Cuban Communist Party head Raúl Castro and niece of the late Fidel Castro, suggested that opponents of the government were using the unsanctioned march to promote agitation against the state.

Castro Espin and CENESEX are highly regarded by many in the LGBT community for spearheading efforts to expand gay and transgender rights and sexual equality.

But some criticized the cancellation of the congas, fearing that it will be seen as a victory for fundamentalists and embolden their efforts to oppose LGBT rights and changing gender roles. On social media, march proponents said the LGBT community could not go backward and risk losing hard-won gains.

"Giving up space only weakens us," Yasmin Silvia Portales Machado said in a Facebook post translated from Spanish.

The unpermitted march, which started at Parque Central in Old Havana, was allowed to proceed a few blocks along the Prado boulevard under the watch of police, but was stopped before it could reach the Malecón seaside promenade. A few Cuban participants were arrested by plainclothes police, according to international news reports.

Havana activist Isbel Díaz Torres, who publicized the unsanctioned conga on Facebook, said he and his partner were detained Saturday morning and not allowed to attend the march. They were released nearly 24 hours later, Torres said in a Sunday morning Facebook post.

"We want to congratulate all of us who showed a capacity for self-organization," Torres said upon his release. "The multiple calls, the networks of people and allies, the decentralization of the call, and the convergence in the fight against homophobia, transphobia, and religious fundamentalism produced good results."

The unauthorized march was largely organized via Facebook and other social media, which have only recently become available to a large number of Cubans. The unsanctioned gathering — as well as the fundamentalists' visible opposition to government policy — suggest that more open communication may be changing the relationship between civil society and the state.

"First, we are saddened by the government's decision to cancel this year's congas due to pressure from anti-LGBTQ fundamentalist Christians who oppose the significant advancements that LGBTQ people have made in Cuban society," the men said. "Second, we are dismayed by the government's attempt to shut down an alternative conga organized by independent LGBTQ activists and the arrests of some participants of that event ...

"We have communicated our concerns directly to the leaders of CENESEX," Jones and Cotter stated. "It has been a complicated and difficult week but we are all grateful for the positive interactions we have experienced with the Cuban people and to witness their continued progress on LGBTQ issues."

Event honors Jones
Castro Espin presented the CENESEX Primo to Jones at the Cuban Gala Against Homophobia and Transphobia at Havana's Karl Marx Theater, in recognition of his decades of work for LGBT liberation and the fight against HIV/AIDS. In return, Jones gave Castro Espin a rainbow flag hand-sewn by his friend, the late Gilbert Baker, who conceived of the flag as a symbol of LGBT unity.

The RWF delegation also brought sections of the AIDS Memorial Quilt, which Jones founded. Those were displayed at CENESEX headquarters for several days and this week will be united with quilt panels made by Cubans.

In remarks warmly received by the gala and diversity party audiences, Jones also criticized the Trump administration's tightening of the blockade against Cuba, which has already led to increased hardship including stricter food rationing on the island.

As a guest of CENESEX, Jones was scheduled to attend only sanctioned events, including the diversity party scheduled at the same time as the unauthorized conga. RWF delegates found it difficult to keep informed about the alternative events due to poor phone and internet access using American devices.

"The government undermined its own message about support for the LGBT community," Jones told the B.A.R. "This issue has sparked an unprecedented level of unsanctioned debate on both sides. This may be the birth of a new independent LGBT movement."