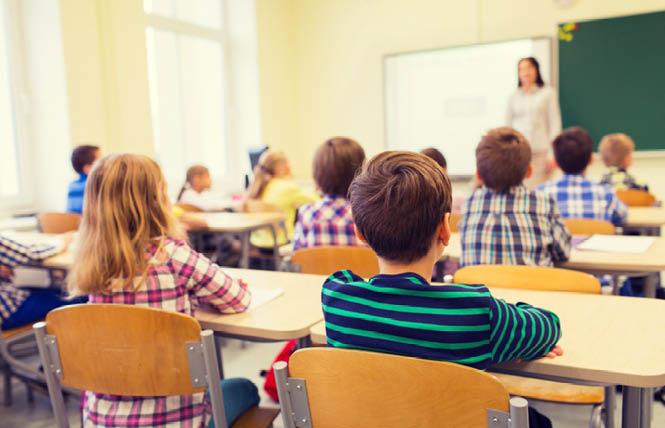 Equality California will release a first-of-its-kind report Monday morning that grades how school districts across the Golden State are educating their LGBTQ students.

The statewide LGBT advocacy organization will officially release its 2019 Safe and Supportive Schools Report Card May 13 at 11:30 a.m. A special website detailing the report's findings will also go live at that time.

"While California has made great strides passing statewide legislation aimed at creating a safe and supportive school environment for LGBTQ students, not all of these policies have been implemented equally," noted EQCA in a news advisory about the release of the report.

A few details about the findings have already been disclosed. As the Bay Area Reporter's Political Notebook reported in March, two districts with the highest scores are San Francisco Unified and Ceres Unified in Stanislaus County. Visalia Unified in Tulare County and Laguna Beach Unified in Orange County also scored in the high percentile, according to EQCA.

The B.A.R. first reported in 2017 on EQCA's plan to grade all of California's 343 unified school districts on their LGBT policies. It is modeled after the Municipal Equality Index created by the Human Rights Campaign, the national LGBT rights group, that annually scores cities across the country on how they are protecting their LGBT citizens.

Over the last two decades GLSEN has released a biennial National School Climate Survey based on a countrywide sampling of students that looks at various LGBT issues in the nation's schools. And Equality Florida at the start of the 2018-2019 school year released its "Safe School Equality Index," which is a guide parents and educators in the Sunshine State can use to see what their school districts are doing in terms of LGBT issues.

The form can be downloaded via a special website at https://d8.eqfl.org/Safe_Schools that the LGBT nonprofit created. It also includes a number of resources for education leaders and parents to use in addressing LGBT issues at school.

"Through this program, we seek to shift the culture so that each of Florida's 67 school districts will adopt comprehensive, nationally recognized best practices for meeting the needs of LGBTQ students and in doing so build a model that can be replicated nationwide," explains the Equality Florida Institute about its Safe and Healthy Schools Program.

But EQCA's report is believed to be the first time an agency has scored a state's individual school districts on how they are educating LGBT pupils and their straight peers. It covers such areas as the teaching of LGBT history and providing gender-neutral bathrooms.

Reviewing the responses and tabulating the individual scores for the districts, as well as building an online database the public could access, took longer than EQCA had initially expected. Of the state's 343 school districts, 130 responded by the extended deadline to do so last November. They are evenly distributed across the state, according to EQCA.

It was a marked improvement from the 30 school districts that had responded by the first deadline EQCA had given them. Achieving a 38 percent response rate "is pretty impressive for us," said EQCA Institute program director Robbie Rodriquez, considering it is the first time the agency has sought the information.

Rodriquez discussed the report during a summit EQCA held this winter for LGBT local leaders from across the state.

"There are significant laws on the books designed to improve the lives of LGBTQ youth as it relates to schools. What we don't know is if schools are being compliant and enforcing those laws, so we decided to figure that out," he said during a panel discussion.

And for students struggling with their sexual orientation or gender identity who are afraid to talk to their parents, they will often turn to educators for guidance, noted Rodriquez. Thus, he argued, ensuring teachers and school staff are being given the proper training they need to discuss such topics is critical.

"If a teacher doesn't have adequate tools to help and provide resources to that student, the student has then been failed by their school and home life," said Rodriquez. "They literally have nowhere else to go. We are all too familiar with what it is like to be a young queer child going to school. For many, it is not a good experience."

A fundraising campaign is underway for EQCA to beef up its staffing in order to hire people to work directly with individual school districts to improve their scores and introduce training for their staff.

EQCA Executive Director Rick Zbur told attendees at the LGBT leaders summit that the agency will be asking the public to demand that those school districts that did not participate in the inaugural report card do so in the future. As for the ones that did and didn't score well, EQCA plans to work with those school communities on improving their standings in future report cards.

The B.A.R. will have coverage of the school report card results on its website Monday when they are officially released and in the May 16 print edition of the newspaper.