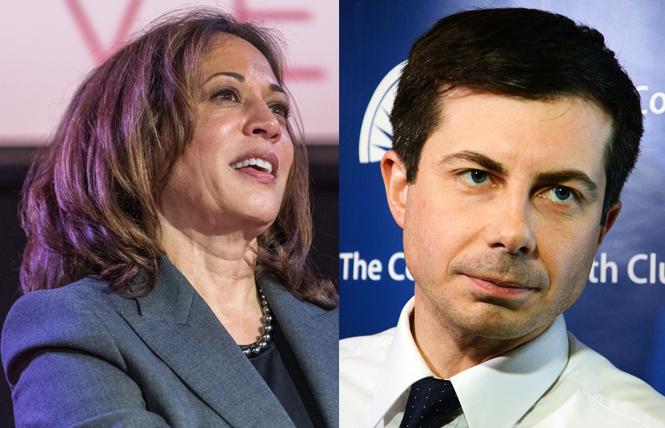 The quest for the 2020 Democratic presidential nomination has just begun with 20 declared candidates, but already, two have stumbled on answers about LGBT issues. As the primary campaign unfolds, we hope all candidates offer policies to protect LGBT rights, particularly since President Donald Trump and his administration have spent the last three years rescinding and repealing protections, while implementing new discriminatory measures like the trans military ban.

California Senator Kamala Harris and gay South Bend, Indiana Mayor Pete Buttigieg each appeared separately during April 22 town halls on CNN. Both generally gave satisfying answers during the forums, but each either made mistakes (Harris) or missed an opportunity (Buttigieg).

Harris
Harris, as former California attorney general and former San Francisco district attorney, is well-known to readers. In response to a question from the audience about "protections" she would provide to the LGBTQ community, she said she has been an ally to the community her entire career and life. And she spoke about her decision as AG not to defend Proposition 8, the state's same-sex marriage ban that, at the time of her taking office, was embroiled in a legal fight.

"And I'll tell you my background on this," she said. "I was, as attorney general, it was one of the pivotal issues in my race to become attorney general, whether or not the elected attorney general would defend a patently unconstitutional law which denied same-sex couples the right to marry. I said I would not defend it because I knew it to be unconstitutional. I won, and I did not defend it. Prop 8 went to the United States Supreme Court. We won, and the wedding bells rang across the country. I'm very proud of that."

Harris took some criticism for her decision not to defend Prop 8, especially since she personally opposed the death penalty but chose to defend the state's capital punishment law. In the ensuing years, critics have asked, what's the difference? She was opposed to Prop 8 and didn't defend that, yet she's opposed to the death penalty but defended it in her role as attorney general.

Her stance reinforces criticism that Harris is too cautious with an eye on higher office. A more cynical analysis might say Harris was pandering to LGBT residents, who vote, and was unwilling to rock the boat on the death penalty — and inmates can't vote. (That issue was also debated among the candidates at the town hall, after Senator Bernie Sanders said during his appearance that all prisoners should be able to vote. When Harris was asked, she said she thought people should have a "conversation" about the issue. Buttigieg flatly said no, prisoners lose rights when they're incarcerated, though he supported voting rights being restored once people have served their time.)

On transgender rights, Harris either misspoke or misgendered people.

"I will tell you, you'll remember the tragic cases involving transgender men who were killed, and there was this defense that was happening in court where the murderer was calling it the gay panic defense. 'Oh, I panicked because I didn't know he was gay and therefore I should not be convicted of murder.' And this was happening around the Matthew Shepard case, around that era," she said.

We think Harris meant to say trans women, since she was aware of the issue before. She was San Francisco DA in 2005 when the second trial was held for the murderers of trans teen Gwen Araujo in Alameda County. That case drew wide coverage in the Bay Area, and there were rallies in San Francisco in support of Araujo and her mom, Sylvia Guerrero. It was also around this time that Harris held a symposium for other DAs around the trans and gay panic defenses, as she noted during the town hall.

Going forward, Harris needs to communicate accurately about the different issues facing trans men and trans women. This simple mistake unleashed an unintended firestorm on social media questioning her knowledge of the issues. While both groups certainly face violence, it's the murders of trans women across the country that is a national problem — and has been for years. Unfortunately, the trans panic defense, similar to gay panic, is alive and well and defense attorneys use it because it works.

One more thing, Harris also goofed last week when she said she would "pass" the Equality Act on day 1 of her presidency. We're pretty sure she meant to say "sign" the act, as presidents don't actually pass legislation.

Whether she's nervous at these town halls or is not briefed by staff, her campaign, which did not respond to an email seeking comment about these matters, needs to avoid preventable missteps.

Buttigieg
As a gay man running for the highest office in the land, Buttigieg can expect a lot of questions about LGBT issues. So far, he has answered most of them well, but he missed a tremendous opportunity last week when he was asked by an audience member, "How would you cooperate with countries that view homosexuality as a sin and a crime that is punishable by death?"

"Well, I think it's wrong to harm or punish people because they're part of the LGBTQ community," he said. "I get that not every country is there. In some dramatically milder respects, but still very bothersome ones, our own country is not there.

"I believe that this is an example of why the world needs an America that is strong, that's credible, and that people believe keeps its word," he added. "Because, frankly, our ability, the ability of the next president and of the U.S. in general to lead on this issue — I mean, to really try to guide countries toward doing the right thing, largely depends on whether we have any moral authority at all. Does anybody think right now that the U.S. has an awful lot of moral authority in the world? It has plummeted."

When asked specifically about LGBT identity as it relates to foreign policy, Buttigieg suggested that U.S. moral authority would persuade countries to "do the right thing" by rescinding their anti-LGBT laws. While this is partly true, he missed an opportunity to say that those countries would have to cooperate with the U.S. and with him as the first out gay president. There are currently 73 countries where it is illegal to be gay and is sometimes punishable by death, many of them U.S. allies like Saudi Arabia, Kenya, and Brunei. Anti-LGBT sentiment is growing around the world with the rise of nationalist movements, yet he missed a chance to speak specifically about this troubling development for our foreign policy.

There are now 20 Democratic candidates running for president. We want a robust discussion about the diversity of the LGBT community, including minorities and trans folks.