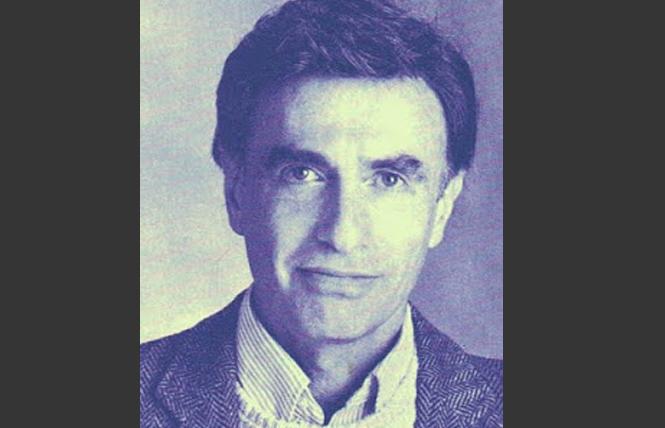 Dr. Richard Green, an American psychiatrist and lawyer who helped lead the fight to declassify homosexuality as a mental disorder, died April 6 in London. He was 82.

With the exception of psychologist Evelyn Hooker, whose pioneering research in the 1950s showed no difference between heterosexuals and homosexuals with regard to healthy mental adjustment, Dr. Green was perhaps the seminal heterosexual advocate supportive of gay men in that rudimentary period after the 1969 Stonewall riots sparked the gay rights movement.

However, Dr. Green was a maverick from a young age, caring little what other people or society felt about him. His obituary in the Guardian hinted that this attitude might have developed in the Brooklyn-born Dr. Green because of the prejudice he encountered as a Jew. He was accepted at the Johns Hopkins School of Medicine at a time when it limited how many Jewish students could be admitted. He testified as an expert witness in 1962 in support of Chester Morales, a Nicaraguan man being deported because of his homosexuality despite having lived in the U.S. for 10 years, in what became a groundbreaking legal victory.

At Johns Hopkins he studied with the renowned sexologist John Money, who specialized in the biology of gender, with both men trailblazing gender reassignment surgery for transsexuals (the term used then).

However, Dr. Green's pinnacle moment came in 1972 when he published a paper in the International Journal of Psychiatry in which he argued against the American Psychiatric Association continuing to label homosexuality a mental illness. He wrote that the issue should be decided by "historical and cross-cultural groundings in homosexual expression, associated psychiatric features accompanying a homosexual orientation, the emotional consequences to the homosexual of societal condemnation, and behaviors of other species."

Despite being falsely attacked as a covert homosexual, he courageously stood up to the establishment and, in 1973, citing his article as well as the few other straight advocates, the APA removed homosexuality from its Diagnostic and Statistical Manual of Mental Disorders.

In 1971, Dr. Green became the founding editor of the Archives of Sexual Behavior Journal, a journal arm of the International Academy of Sex Research, a position he would continue for almost three decades. In the late 1980s, he obtained a law degree from Yale and, in 1990, in one of the first discrimination cases against the Boy Scouts, represented a gay man who had been rejected as a scoutmaster. Though he lost, the case became a cornerstone in eventually persuading the Boy Scouts to overturn its ban against gay Scouts in 2014.

Dr. Green also successfully fought for a pilot to return to the cockpit after she transitioned following gender reassignment. Dr. Green was an early supporter of gay men serving in the military, fighting for their reinstatement once dishonorably discharged. On the 1974 television series, "The Advocates," he argued for marriage equality, which was still a fantasy for LGBTQ people with 90% of Americans opposed to it. During this same period he was a psychiatric expert witness for lesbian mothers trying to gain custody of their children after a divorce.

Dr. Green wrote eight books, but two were landmarks: "Sexual Identity Conflict in Children and Adults" (1974), about understanding and accepting gender minorities, and "The Sissy Boy Syndrome and the Development of Homosexuality" (1987), which showed the arduous road many effeminate boys traveled on their development into gay men. He was criticized for some of his terms (sissy boy) and early transgender definitions. He was awarded the Magnus Hirschfeld Medal for Sexual Research in 2006.

In a 2007 interview for an Atlantic Monthly article on homosexuality and biology, he believed that in the reporter's lifetime, "we will find a gene that contributes substantially to sexual orientation."

Christopher Carrington, associate professor of sociology and sexuality studies at San Francisco State University, whose research focuses on gay and lesbian family life and relationships, praised Dr. Green in an email to the Bay Area Reporter.

"Dr. Green was a true pioneer in the field of sexology, someone who fought vigorously for the application of the scientific method to the task of understanding human sexuality," Carrington wrote. "I encountered Dr. Green many times in his role as editor of the Archives of Sexual Behavior, one of the leading journals in the field. I often assigned his work, particularly the 'Sissy Boy Syndrome and the Development of Homosexuality' during the late 1980s and early 1990s."

Carrington said Dr. Green's work was not often "greeted with open arms by students, particularly by gay male students, who often expressed discomfort with the title."

"Once students read the work, however, their views of Green often improved," Carrington added. "When I think back to it now, the book was published in the Reagan era, and in the midst of the HIV/AIDS crisis, and I suspect both of these factors led many gay men at the time to seek out and to embrace overly-conventional gender presentations of themselves.

"Today, in the era of RuPaul and genderqueer, there is a lot less stigma associated with being a 'sissy boy' and whole lot more embracing of gender and sexual variation," Carrington wrote. "I found Green's work refreshing, particularly in its matter-of-fact approach, and detailed interview transcripts that really captured the lives of gay men as they developed from boys into men. It was an approach that didn't stigmatize gender and sexual variation, but rather attempted to understand it."

Carrington wrote that he and Dr. Green were impressed with some of the gay men who "strongly embraced their 'sissy boy' experience and identity in the face of overwhelming resistance from their families, communities, and many parts of society."

"Their resistance to conformity and their tenacity to be themselves left a clear impression on Green, an impression that led him into becoming an even fiercer advocate for inclusion, understanding, and equality," Carrington wrote.