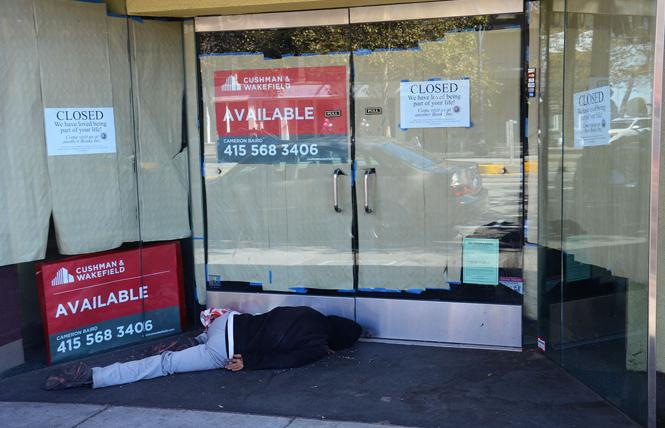 A person sleeps in the doorway in the Castro in this 2016 file photo. Photo: Rick Gerharter

The day after the San Francisco Board of Supervisors rejected a 63-unit housing development with 15 below-market-rate apartments because it would cast an evening shadow on a South of Market park, the Bay Area Council Economic Institute issued a report on the regional housing crisis. Its conclusion: cities and counties in the Bay Area need to work together, ideally with the state, for meaningful improvement to occur. "Until very recently, homelessness was considered the problem of individual cities and counties," read the report's executive summary. "For a metropolitan region like the Bay Area, which is divided into nine counties and 101 cities, this approach fails to meet the needs of an intraregionally mobile homeless population. For instance, the Bay Area's myriad datasets on homelessness are incompatible, and assets are planned and built without coordination or optimization."

Granted, this is not a new idea. Oakland Mayor Libby Schaaf, and some gay Bay Area elected officials — notably state Senator Scott Wiener (D-San Francisco), Emeryville City Councilman John Bauters, and El Cerrito City Councilman Gabriel Quinto — are among those who have long pushed for a regional approach. This new report, "Bay Area Homelessness: A Regional View of a Regional Crisis," substantiates their arguments. Leaders in larger cities like Oakland, San Francisco, and San Jose must look beyond their borders for comprehensive responses. In San Francisco, at least, such an approach appears to have taken a back seat while at the same time the supervisors prioritize shade issues at a park over people sleeping on the streets and residents squabbling about where to put a Navigation Center. As Mayor London Breed tweeted after last week's board vote, "You cannot claim to be pro-housing and then reject projects like this one."

The institute's report examines the profiles of Bay Area homeless: "Compared to the general population of the Bay Area, it is disproportionately comprised of homeless men, unaccompanied youth, and people of color." Families, which make up large segments of homeless people elsewhere in the country, are only 14 percent of the overall Bay Area homeless population, according to the report. (And it's worth noting that in San Francisco, at least, huge strides have been made to house homeless families in recent years, city officials have told us.) The report states that 25%, a relatively high proportion, of the region's homeless identify as LGBTQ. That's not surprising to us — 2018 estimates of queer homeless youth in the city were 43% of the estimated 1,500 homeless youth.

The other important fact gleaned from the report is that the vast majority of homeless people in the Bay Area have lived in their current county for more than a year, which is related to the affordability crisis — it's just too expensive for a lot of people to live here. "Given this information, the region's crisis is one of its own making, and not a product of the migration of homeless individuals from other states or regions," the report states. It adds, however, that some movement does occur and that "data-sharing initiatives between counties are beginning to identify how certain individuals are utilizing services across the region over time."

So yes, more cooperation between Bay Area cities and counties would help the situation. Of course, the obvious solution is to build more below-market-rate housing. But when our regional neighbors look at the board's rejection of the 63-unit development last week, they're likely asking themselves, "If San Francisco can't even do this, why should we?" That is exactly the wrong approach. Instead, leaders should be reaching out to colleagues and strategizing and identifying locations for mixed-unit housing developments. The intransigence of some political leaders in the face of the Bay Area's housing crisis is breathtaking.

Leaders must look beyond their borders and work with their neighbors for a comprehensive approach to address homelessness in the entire region. They need to convince residents — and each other — that more cooperation would be beneficial than addressing the problem separately.

Postscript
Last week we editorialized that every district in San Francisco should have a Navigation Center. This week, we got word from Supervisor Matt Haney that he's called for exactly that. We're sorry we missed the news, but happy he's put forth legislation. Now, if the rest of his colleagues can unanimously vote for that — like they voted against that other development — the city could get started on housing people all over the city.