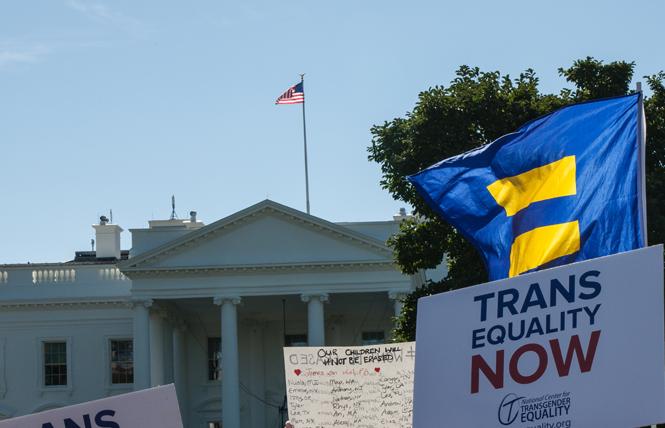 It feels like every day someone is attempting to legislate transgender people. While so-called bathroom bills feel like they're finally on the wane, proposals around transgender medical needs, the right to serve in the military, and so many more horrible bills are making their appearance. Oh, and of course, the other big fad, whether transgender people can participate in sports.

Every time these rules or bills come up, however, we're left with one fundamental question: how does one define gender or sex?

Buckle up, this one is gonna get messy.

When a body is formed in the womb from a pile of cells, we initially have a single form of genitals. As a fetus gestates, this form differentiates: Things turn into a penis or a vagina, a pair of ovaries or a pair of testes, labia or scrotal tissue. It's really kinda wild.

I'm also going to note here that some of these physical changes can lead to genitalia that some doctors will consider "ambiguous," and which many of those same doctors decide to "correct." Oh, and no, I'm not saying that transgender people are necessarily intersex, or vice versa.

Most of the time, people have two distinct forms of chromosomes that help determine sex. You likely heard about them way back in grade school. These help differentiate our proto-genitals during gestation, with XX bodies primarily developing as female and XY bodies as male.

Again, biology isn't perfect, and there are all sorts of variations. In addition to XX and XY, there are scads of variations. XXY, XXXY, X0, and so on. There's also variations within XX and XY that can come into play. In short, XX and XY are more of a guideline than any sort of rule, and in a world with 7.6 billion people residing on it even the slightest variation is notable.

Then you have sex hormones — among them estrogen and testosterone — that may affect a fetus. They're super powerful little things that can also play a part in the formation of a body; more on them in a moment, though.

It's commonly believed that somewhere in the formation of trans bodies, something might form a bit different than in others. Again, not the same, per se as what an intersex person might experience, but perhaps similar. Our brains seem to expect one thing, while our bodies develop in a totally different direction.

After we are born, and began to grow and mature, we may begin to realize that we are different. We might expect to be seen as a particular gender, but discover that others do not see us that way. As we reach puberty — and the hormones that are naturally produced in our bodies start to work their magic — we may even find our bodies shifting in ways we simply are not equipped to handle.

For the most part, that's what it's like to be transgender.

Once again, however, this is messy. Biology is not exact, and every one of us — trans or not — is affected by the DNA we inherit, as well as the environment we form in.

This brings us back to the basic question: How does one define sex or gender?

For that matter, how many of us even know what our sex chromosomes are? While you may feel it safe to assume you are XX or XY, odds are better than nil that you might be wrong. The same is true for any person you see.

Much the same could be said about genitals, gonads, or hormones. We live in a world where color and shade provide infinite variation, and seek to boil things down into two perfect, unchanging examples. This isn't possible.

I mentioned hormones earlier. If you talk to most transgender people who have started hormone replacement therapy, even in a world of such variation, you will find amazing similarities in their stories. For many, the experience of going onto HRT is like having a weight lifted, the clouds parting, or an incessant car alarm being silenced. It is an experience of "rightness" that is so universal it cannot be so easily brushed aside.

This leaves only one common method so many laws use to determine sex or gender, and that is the birth certificate. This one may be the most problematic. I have previously mentioned the horrible treatment that so many people who were born intersex have faced here.

For transgender people, our gender may not even be apparent when a medical practitioner looks at a fuzzy ultrasound or a freshly delivered baby and decides what gets written in on the birth certificate. We have to find out there's an issue, oftentimes years after such a document is issued.

Bodies are messy, and not just for transgender people. We come in all shapes and sizes, forms and appearances. Much of this changes over the course of our brief lifetimes. Expecting anyone to fit into one of two characters on a form may be foolhardy.

In short, there is no way to make a simple legislative test for who is man and who is woman — and maybe it's the wrong question to ask in the first place.

Gwen Smith's body isn't that messy, as she just showered a bit earlier. She can be found at www.gwensmith.com.