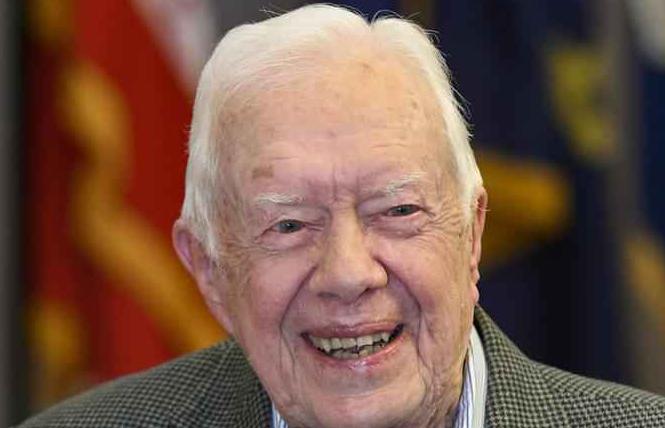 As of last week, Jimmy Carter was 94 years and 172 days old, making him the longest surviving president in U.S. history, surpassing George H.W. Bush, who died at the end of last year, and Gerald Ford before him. He is my favorite former president alive today, but it wasn't always that way.

When Carter ran for president, we mocked and ridiculed him. He was a "peanut farmer" and a "nukular engineer." He smiled at oddly inappropriate times. He lusted after "other" women "in his heart." He wore Mister Rogers sweaters into the Oval Office, and he allowed Americans to be taken hostage by a foreign power while we watched nightly on "Nightline."

These days, Carter is mostly known for building houses with Habitat for Humanity and for monitoring overseas elections. He has also become a voice for LGBT equality, although it is hard to know exactly how much Carter might have pushed for full equality had he won re-election. But in the last seven months of his administration, Carter got three critical circuit court nominations through the confirmation process that would change our history: Ruth Bader Ginsburg, who was later elevated to the U.S. Supreme Court; Stephen Reinhardt, who became a liberal lion and author of the victorious opinion in Perry v. Brown, affirming the decision striking down Proposition 8; and Stephen Breyer, who later became one of the most reliably liberal votes on the Supreme Court. These judicial appointments and others presented (for a while) a bulwark against the backlash that followed the expansion of civil rights under the Warren Supreme Court.

I once asked Reinhardt if he was surprised how avidly we all follow every opinion of the courts. He gave a good laugh, "Nobody pays any attention to the courts." That may have been true before Prop 8 and before Senate Majority Leader Mitch McConnell ran out the clock on Barack Obama's nomination of Merrick Garland to the Supreme Court for 293 days. President Donald Trump doubled down with Supreme Court nominations of Neil Gorsuch and Brett Kavanaugh (both confirmed), and handfuls of ultra-conservative lower court appointments. Meanwhile, Democrats lost the right to filibuster nominations and the power of home-state senators to reject a nominee, the so-called blue slip privilege.

Much has been lost since Carter's administration. Having vanquished Carter, Ronald Reagan eviscerated the labor movement and began decades of dismantling the system of progressive taxation. Even voting rights — once championed in a bipartisan manner — is challenged in courts and legislatures. Partisan gerrymandering has become so prevalent that even though a majority of Americans regularly vote for Democratic legislators, the House and many statehouses are often run by Republicans. Two presidential candidates since Carter have lost the presidency even while winning the popular vote. The ultimate result is that virtually every progressive idea in law has now come under attack because Republicans have been unafraid to manipulate the rules for their own benefit.

As a result, our democracy and our planet are in serious crisis. If they are to survive, we have to allow bold thinking to cut a clear path through the damage that has been done since 1980. Not afraid of big thinking himself, Carter installed solar panels on the White House, until Reagan had them removed, long before Al Gore came along. He became a Nobel Peace Prize-winning gentleman statesman, ensuring that democracy is protected through fair and scandal-free elections. Today, we may need different ideas, like abolishing or updating the Electoral College, and expanding the number of Supreme Court justices to make it much harder for any president to have unreasonable power over the courts. What's more, our LGBT community should be the first to appreciate this necessity because we've been there before: To those who say these are pipe dreams that will never happen and certainly not in our lifetime, I'd say that we have about the same chances of making these changes as we had of getting national marriage equality in our lifetime when my husband and I started dating in 1990. If we don't dream it and strategize to accomplish it and work like hell for it, then sure, it will never happen.

Fortunately, there is hope that these ideas can take hold, as we see from the interest they garner from Democratic presidential hopefuls. Former National Center for Lesbian Rights executive director Kate Kendell, now campaign director for Pack the Courts, said, "Since Pack the Courts was launched last fall the resonance of the idea has exceeded my wildest imaginings." When Bill Clinton first nominated Garland to the D.C. Circuit, Senator Chuck Grassley (R-Iowa) voted against him because the circuit court has "too many judges." Republicans, in other words, unpack the court when it suits them, so we must not be afraid of what they will do if we propose a fair, bipartisan way to rebuild faith in our judiciary and our electoral system. In fact, we should be afraid of what they will do if we do not.
We all deserve a habitat of humanity. Let's elect another Jimmy Carter in 2020.

John Bare was a molecular biologist and now a donor-activist. As a photographer, his work has appeared in the Advocate and Asia Week, and on the cover of the Bay Area Reporter, the National Catholic Reporter, and the forthcoming book by James Haas entitled "The San Francisco Civic Center: A History of the Design, Controversies, and Realization of the City Beautiful Masterpiece."