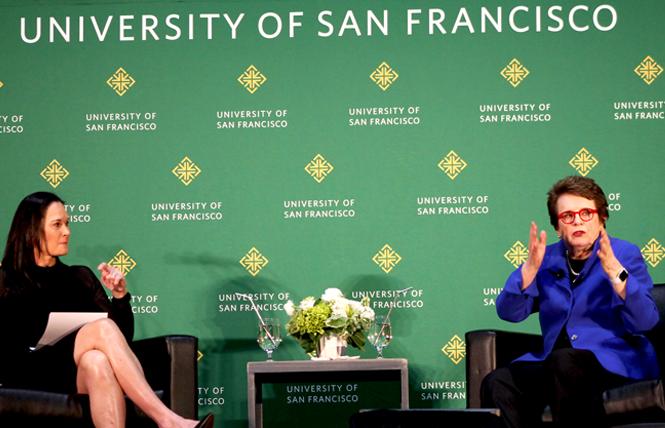 Billie Jean King charmed audience members as she regaled them with stories about her life, women's rights, and gender equity at a recent appearance at the University of San Francisco.

The 75-year-old lesbian former tennis champion inspired attendees with her wit and dispensed some seeds of wisdom during the evening.

King grew up in Long Beach along with her parents, Bill Moffitt, a firefighter, and Betty Moffitt, a homemaker. Her younger brother, Randall James "Randy" Moffitt, played for the San Francisco Giants and other major league baseball teams.

Sports came naturally to the siblings. They loved balls, King said. Any type of ball they went crazy over, and she loved watching her father shoot hoops, making 100 consecutive perfect shots with the basketball hoop in their backyard.

As a child, King twice made big pronouncements, once when she was 5, and then several years later when she was 11. At first it was a general, "I am going to do something big," she said.

Later, she said she wanted to be the number one tennis player in the world.

The announcement came after only her second time playing tennis with a friend who introduced her to the sport. She began playing on the public courts of the California beachside town and immediately began competing in tournaments.

Her brother followed suit a couple of years later with his own news that he wanted to play professional baseball.

King joked about her parents' shock by their kids' announcements about their future careers.

"I was scared, I was really scared because I might not be able to play that good," King, who was a guest of the USF Silk Speaker Series March 19, told the audience of more than 1,000 people at the sold out event. Kellie Samson, with the USF office of marketing and communications, said King's talk was also livestreamed to USF's satellite campuses.

King's parents never pushed their children or even asked if they won or lost a game, she said. They simply asked how the game went. But her father did make her work to get her first tennis racket and the siblings were competitive in sports.

The voice of change
Early in her tennis career, King recognized that the playing field was largely made up of men and white people. It was at that moment she made the commitment to use her platform for equality and social justice, she said.

"I knew I was very, very fortunate to have this opportunity," said King. "I knew in my heart of hearts I had to be number one or nobody would listen, particularly because I'm a girl."

King hasn't backed down since. From starting the Women's Tennis Association and demanding pay equity for women in sports to standing up for tennis star Serena Williams after she angrily exploded on the court during a match last September and got slapped with penalties and hefty fines.

"There are centuries of anger in there. Black women have always been put down when they get angry," said King, adding that women and men have to have each other's backs.

King, who admitted that she didn't begin feeling comfortable in her own body until she was 51 years old, spoke earnestly about women and what sports teaches them.

"Sports is such a great place to learn how to navigate your life. I use what I learned in sports every single day," she said.

Sports also teaches girls how to "trust your body" and how to "be team players," she added.

Those messages for boys and girls have to be chipped away at every day, she explained.

King lamented about the sluggish rate of progress, leaning back in her chair and throwing up her arms in frustration.

"So slow this progress," she said. "When you read history it's quick. But when you live it, it is so slow."

King, who is a history buff, stressed the importance of learning about the past.

Not much discussion of LGBT rights
Some LGBT audience members were slightly disappointed that King wasn't asked about, or discussed, LGBT rights.

Alvin Chua, a 43-year-old gay man who had his tennis racket signed by King, blamed the moderator, lesbian former USF basketball coach Jennifer Azzi, who did note King's influence in the LGBT rights movement during her introduction but didn't raise the issue again during the conversation.

Chua's friend, Marvin Dunson III, 42, identifies as pansexual. He suggested that there could have been a question about LGBT rights in sports that might have prompted her to speak more about the LGBT rights movement's history and where the country is today.

King did attempt to talk about LGBT rights. She briefly spoke about her own personal struggle with her sexuality and she repeatedly brought up gender diversity. She told the story about transgender ophthalmologist and former professional tennis player Dr. Renee Richards, who toured with the tennis players in 1977.

King advocated for Richards to tour with the WTA. She received resistance from the other women but convinced them to give her a two-week test period. "I guarantee you, you'll love her," King said she told the women.

Within a week the other women embraced Richards, she said.

Despite the lack of focus on the LGBT community, queer audience members came out in force for the evening and they were thrilled with King's discussion.

Dunson said she was an amazing speaker. He loved King's anecdotes and learning first-hand "what has been important to her along her journey," he said.

"I'm telling you my history so you can learn from that history and there is so much value in there from this particular figure in American and global history," he added.

Evans attended the event because of King's equal rights work.

"I was really in awe of how much she did say," said Evans. "That we are not changing fast enough, which is true in so many ways."

King left the audience with some key lessons: relationships are important with yourself, your family, friends, and community; be good and true to yourself; live authentically; educate yourself and keep learning; be a problem solver.

Last but not least, "Define yourself, don't let others define you," she said.

When asked what she believes her biggest legacy is, King responded, "I'm not done yet."