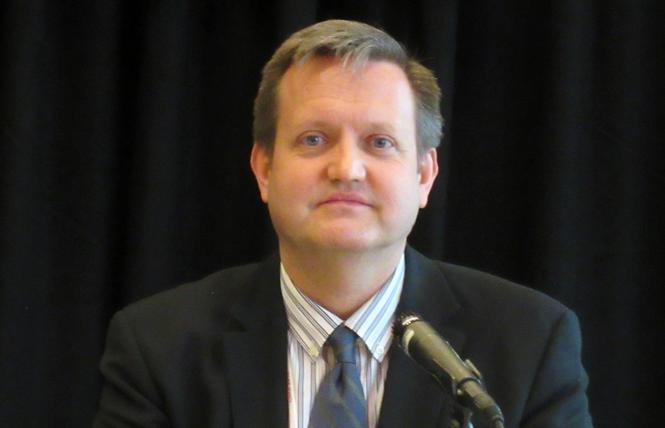 PrEP was a major topic at the Conference on Retroviruses and Opportunistic Infections this month in Seattle. Researchers showed that a new version of tenofovir works as well as the Truvada pill and offered insights about how gay and bisexual men are using PrEP.

Dr. Brad Hare from Kaiser Permanente San Francisco presented findings from the DISCOVER study, a head-to-head trial comparing Truvada versus Descovy in more than 5,300 mostly gay and bi men and a small number of transgender women. Participants were randomly assigned to take one of the two combination pills once daily for two years.

The study showed that Descovy works as well as Truvada, with few new infections in either group (seven and 15, respectively). Most newly infected people were found to have low tenofovir levels in their blood or already had an early undetected infection when they started PrEP.

People who used Descovy had smaller changes in kidney biomarkers and slightly less bone loss. However, it is not clear whether these test results predict important clinical outcomes like kidney failure or fractures. Previous studies have shown that Truvada PrEP is safe for most people.

Hare said Descovy could be a good option for people at risk for kidney problems.

"Some of those folks are either taking Truvada and keeping their fingers crossed or have not been on PrEP," he told the Bay Area Reporter. "I think in people that have moderately impaired renal function, TAF is probably a slam dunk."

But some advocates were less impressed, questioning whether it's worthwhile to devote resources to study prevention tools so similar to what is already available. Others worry about the individual and public health cost of Descovy, given that Truvada will go off patent soon, paving the way for cheaper generic versions.

"Count me as profoundly unexcited about a second safe and effective daily pill for HIV prevention," said Jim Pickett of the AIDS Foundation of Chicago. "What we do need are other types of prevention products such as rectal douches, long-acting injectables, fast dissolving inserts, and implants."

Along those lines, Charles Dobard of the Centers for Disease Control and Prevention reported findings from a preclinical study of a fast-dissolving suppository — designed for vaginal or rectal use — containing tenofovir alafenamide and elvitegravir.

His team found that only one out of six female monkeys using the TAF vaginal insert became infected with SHIV (a simian-human hybrid virus), compared with seven of eight monkeys using an inactive placebo insert.

"So far, the PrEP landscape has been dominated by TDF, but now we have TAF in an insert and pill," said HIV prevention expert Dr. Sharon Hillier from the University of Pittsburgh. "The insert could be used in the front door or the back door as an on-demand method."

Starting, and staying on, PrEP
Other studies at the conference looked at how many gay and bisexual men are eligible for PrEP, how many are using it, and how long they stay on it.

A CDC study found that a third of at-risk gay and bi men are now using Truvada for HIV prevention. But while the number of men on PrEP has risen dramatically, use remains low among black and Latino men, who have disproportionately high rates of new infections.

"Although HIV PrEP use increased by over 500 percent from 2014 to 2017, only one in three men at risk for HIV infection reported using PrEP," said CDC researcher Teresa Finlayson, part of a team that interviewed more than 8,000 HIV-negative men in 20 U.S. cities, including San Francisco, who were considered to be at substantial risk for HIV.

The researchers found that PrEP awareness increased from 60 percent in 2014 to 90 percent in 2017. Awareness rose in all racial/ethnic groups, but remained lower among black and Latino men (86 and 87 percent, respectively) compared with white and "other" men (95 and 94 percent). PrEP use also increased, from 6 percent to 35 percent. Here, too, PrEP use was lower among black men (26 percent) and Latino men (30 percent) compared with white men (42 percent) and "other" men (40 percent).

In a related study, Kevin Weiss of Emory University in Atlanta and colleagues estimated the proportion of gay and bi men eligible for PrEP, based on a nationwide web-based survey of 4,196 cisgender (non-transgender) men who had ever had sex with a man.

Weiss noted that this figure is higher than the CDC's 2015 estimate of 25 percent PrEP eligibility in this population. Thus, they concluded, more sexually active gay and bi men are likely indicated for PrEP that previously estimated, and a lower fraction of indicated men may be receiving it.

Many studies over the years have looked at factors that influence PrEP adherence, or consistently taking the prescribed dose on schedule. Now researchers are thinking more about PrEP persistence, or how long people continue to use it.

Ya-Lin Huang from the CDC and colleagues evaluated PrEP persistence among more than 7,000 people covered by commercial health insurance and 349 individuals on Medicaid who started Truvada for PrEP between 2012 — the year it was approved for HIV prevention — and 2016. They defined persistence as the time from the first filled PrEP prescription until there was a gap of more than 30 days.

Huang noted that the study did not include people who had neither commercial insurance nor Medicaid — a group that may have more difficulty maintaining a steady supply of PrEP.

These findings, Hillier said, "show a mismatch between the people who most need PrEP and those who can persist on it."

As part of the Trump administration's recently announced Ending the HIV Epidemic plan — which aims to reduce new infections by 75 percent within five years and by 90 percent within 10 years — the CDC said it will expand efforts to increase PrEP awareness, access and use, particularly among those at highest risk for HIV infection.