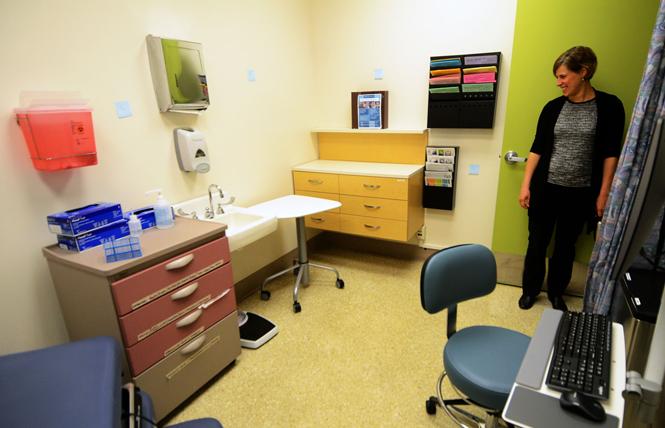 At the newly refreshed City Clinic facility South of Market longtime patients will notice a coat of parakeet green paint on the doors and trim of the remodeled clinical rooms and upgraded computer equipment to better enter and track their medical records.

It marks the first time that the San Francisco Department of Public Health has upgraded the seven medical exam rooms since the clinic moved into the former firehouse at 356 Seventh Street 37 years ago. It follows a refresh to the clinic's reception area four years ago that saw its entryway and bathrooms remodeled to be ADA compliant and a tropical-themed mural painted on one of the waiting room's walls.

The latest work required the clinic to briefly shutter last month; it returned to normal operating hours February 28. The hint of color, chosen by the clinical staff to replace the previous institutional blue hue, and new work areas meant to better serve the clinic's nursing staff and clinical team are a marked difference from the previous interior design, said Clara Shayevich, a clinician at the clinic for the past 26 years.

"It has always been an amazing place to come to work, but now it is superb and welcoming to everybody," said Shayevich, adding that the new paint scheme has made the clinic "a beautiful environment to work in."

During a tour of the clinic Tuesday morning when it was closed to the public, workers were continuing to add the final touches of the remodel, such as installing hand sanitizer dispensers on the wall adjacent to the exam room entrances. The work should be completed by early April.

"It looks like where you go to the doctor's now," said Tamara Ooms, who has worked at the clinic for 12 years and been its nurse manager the past two and a half years.

City Clinic medical director Dr. Stephanie Cohen explained that the clinical spaces have been specifically designed to improve the ergonomics for the clinic's employees. And the location of the various equipment and supplies has been streamlined so it is the same in each exam room.

"It makes it easier to do our work. It is cleaner. It is quite dramatic," said Cohen. "What I have heard people say is they are really struck by how much cleaner, crisper, and fresh the rooms look. I think people appreciate the investment in the clinic. People see it as an investment in their health. It tells them we respect them as patients."

The work in the exam room area cost about $50,000, said Cohen, while the earlier construction on the waiting area and entrance cost $450,000. The location is City Clinic's fourth since its founding in 1911.

It comes as DPH strives to stem a rising tide in cases of syphilis, gonorrhea, and chlamydia that has been going on in the city since 2007. According to preliminary data for 2018, chlamydia increased by 4 percent last year to 9,481 cases.

More changes are in store for City Clinic this year, as the staff is working on the launch of a new initiative called City Clinic Express for asymptomatic patients who are seeking screening for sexually transmitted diseases and do not need to see a clinician. It aims to speed up the time those patients who qualify need to spend at the clinic, which sees 70 to 80 people per day.

Assisting in the effort is a new machine called a GeneXpert by Cepheid that can return results for gonorrhea and chlamydia tests in 90 minutes. It currently takes several days for patients to receive results for the tests.

"The primary goal is to have an expedited route for patients so their wait time is less," explained Ooms. "We don't know yet what it will do to our capacity."

City Clinic is open Mondays, Wednesdays, and Fridays from 8 a.m. to 4 p.m. It is open Tuesdays from 1 to 6 p.m. but only sees patients with STD symptoms between 1 and 3 p.m. Thursdays it only sees symptomatic patients from 1 to 4 p.m.

For more information about the clinic and its services, visit http://www.sfcityclinic.org/.

UPDATED 3/22/2019 to correct the number of patients the clinic sees is 70 to 80 people per day and revised the health department's estimated cost for the remodel.