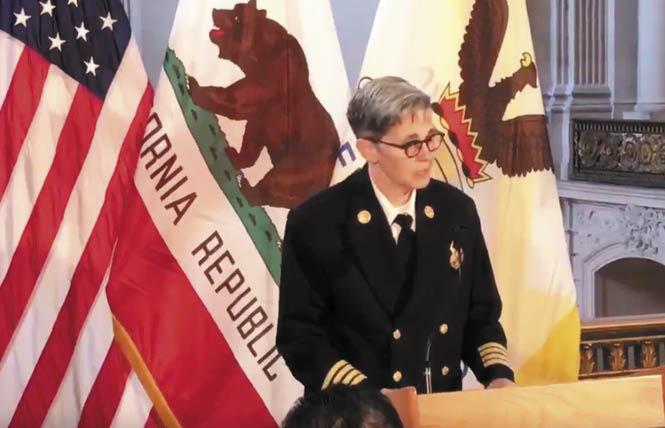 San Francisco Mayor London Breed made history Wednesday with her appointment of Deputy Chief Jeanine Nicholson as the city's first LGBT fire chief. The 25-year veteran of the fire department will succeed Chief Joanne Hayes-White when she retires May 5.

Breed revealed her choice to lead the department at a news conference in City Hall. It came two days after she had named Deputy Public Defender Manohar Raju as the successor to former Public Defender Jeff Adachi, who died unexpectedly on February 22.

Nicholson thanked the mayor in her brief remarks, telling Breed that, "with humility and determination, I accept. Now, let's get back to work."

Hayes-White told the crowd she "was thrilled to be here" and applauded the mayor for selecting Nicholson out of three possible picks that the fire commission had sent to her. She had announced her decision to retire in October, prompting the monthslong search to find her replacement.

"She gets the importance of teamwork, which is what we are all about within our department and working with city agencies," Hayes-White said of Nicholson. "I was proud to promote her last year. She got a taste of what it is like to juggle different priorities. I wholeheartedly endorse Mayor Breed's selection."

In her current role as deputy chief of administration, Nicholson has overseen a number of divisions within the fire department, including support services, homeland security, human resources, investigative services, and the assignment/personnel offices.

A breast cancer survivor, Nicholson sustained second-degree burns at an arson fire on Felton Street in 2009 where five other firefighters were also injured, one critically, noted the mayor's office in its news release announcing her appointment.

"Deputy Chief Nicholson is a dedicated public servant and a tremendous leader and I can think of no better person to serve as our next Fire Chief," stated Breed. "Her experience and her resiliency have prepared her to lead the men and women who are out there every day protecting our residents, and I am confident she will be ready to lead the Department on day one."

Breed also thanked Hayes-White "for her service and her support as we go through this transition process."

Hayes-White promised it would be "a smooth transition" as she spends the next six weeks working with Nicholson to hand off leadership of the department to her. Nicholson, in her remarks, noted that running the fire department "is always a team effort" and expressed her appreciation to her colleagues for their own hard work.

"I love this city and this department and I love being of service," said Nicholson. "I vow to work hard to continue to carry out the mission and vision of the San Francisco Fire Department and to keep moving us forward in a positive way."

"This is clearly an exciting moment for the LGBTQ community," he wrote in a text message.