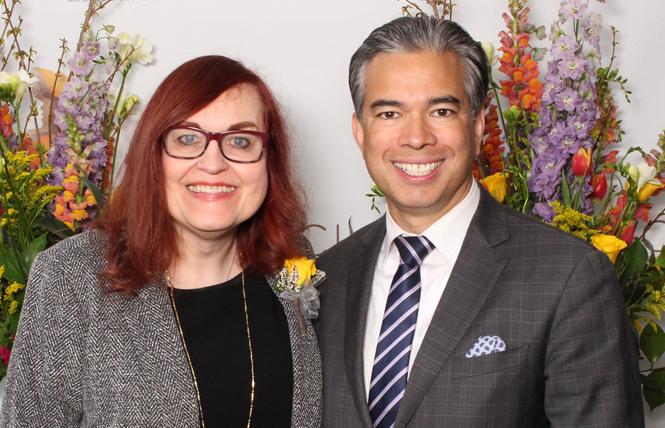 Transgender women and lesbians were among the honorees at the Legislature's annual "Woman of the Year" event in Sacramento Monday, March 4.

Each Assembly member and state senator selected a woman from their district to honor. Following a luncheon that included a keynote address by first partner Jennifer Siebel Newsom, each chamber held a formal ceremony in the Capitol.

Alameda County Superior Court Judge Victoria Kolakowski was recognized by Assemblyman Rob Bonta (D-Oakland). In addition to making history with her 2010 election, Kolakowski is a leader in educating the judiciary on trans issues.

Kolakowski wrote on Twitter that she was "honored to receive this great honor." Her mother, June Kolakowski, traveled from Staten Island to attend the ceremony.

Nixon is the convener of the Peninsula Solidarity Network, which involves congregations, schools, businesses, families, and individuals coming together to help defend victims of social and economic injustice. It also fights human rights violations and works to protect the safety of immigrants.

In southern California, Assemblywoman Sydney Kamlager-Dove (D-Los Angeles) recognized lesbian Rabbi Lisa Edwards, Ph.D. According to her biography, Edwards is the longtime rabbi at Congregation Beth Chayim Chadashim, the first synagogue in the world founded by gays and lesbians, and today an inclusive, progressive community celebrating Jewish faith and culture.

There was one light moment when Assemblyman Richard Bloom (D-Santa Monica) stood with his honoree, LGBT ally and comedian Kathy Griffin. After she was presented with her plaque, she shouted "Screw Donald Trump!" to much laughter in the chamber. Griffin was recognized for her brand of pull-no-punches comedy.

Over on the Senate side, gay state Senator Scott Wiener (D-San Francisco) honored Nicky "Tita Aida" Calma, a trans woman who has spent her life working in health promotion with a focus on HIV/AIDS and transgender issues.

"Thank you so much Scott for this recognition," Calma wrote on Facebook.

During the luncheon, Siebel Newsom, who has long championed women's rights, told the honorees and lawmakers that "Women's History Month has never felt more important. One woman's story can change the world."

She also mentioned the importance of a diversity of voices, saying that African-American women, LGBTQ women, and others make society better when they hold seats of power.