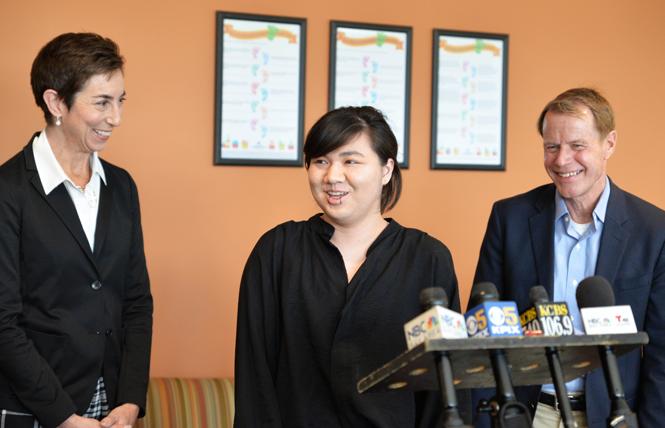 The opening last week followed a soft opening late last year. It is the first and only such facility in the South Bay, officials pointed out during a recent tour.

The gender center's goal is to provide safe comprehensive care to the South Bay's estimated 16,000 gender-variant residents. County officials based that estimate on national data, and included all ages and socioeconomic backgrounds.

Previously, transgender patients had to create their own word-of-mouth network of service providers in Santa Clara County or travel to Planned Parenthood in Santa Cruz, TransVision at the Tri-City Health Center in Fremont, or Lyon-Martin Health Services and other transgender-welcoming providers in San Francisco.

"It just feels nice that there is a place close in my home area that I can actually go to for just simple care," said Nekyua Valotea, a 24-year-old transgender man who has been receiving services at the health center where the clinic is located for about two years.

It was the first time that Ken Yeager, the gay former Santa Clara County supervisor, saw the center, he told the Bay Area Reporter.

"I've been working on this particular issue for quite a while," said Yeager during the February 11 tour. "To finally come to the day that we can open it to the public is tremendously gratifying."

County-supported services for the South Bay's LGBT community are Yeager's legacy. During his tenure on the board he advocated for the clinic and other LGBT services following the first countywide LGBT health survey in 2013.

The center was a priority for Maribel Martínez, a queer woman who is director of Santa Clara County's Office of LGBTQ Affairs. The office co-founded the clinic with Dr. Jackie Newton, a lesbian who is the assistant medical director for the Valley Homeless Health Care Program, one of the county's primary care clinical programs.

"This clinic opened as a direct response to the lack of transgender, nonbinary, and gender-diverse services in the county," Newton told reporters.

Recalling discovering the importance of the gender health center six years ago, Yeager said, "It was very obvious that transgender people were not getting the service that they needed."

He remembered listening to transgender individuals talk about having to go outside of the county to receive health care due to the lack of services and discriminatory care providers in the county's health care system.

"We knew right away that we had to open up a clinic to serve their need," he said.

It was important to take the time to find the right partners, Martinez told the B.A.R.

Working with Newton, the LGBTQ affairs office ensured patient access through multiple points of entry in the health care system.

"What was really important to us [was] we wanted it to be as accessible as possible," she said.

Newton added, "In order to provide good service it needs to be multidisciplinary," and institutional and social barriers to care needed to be removed.

That meant hiring and training culturally sensitive medical and mental health care providers and staff, eliminating referral-based treatment, making appointments simple to obtain, and ensuring the center was located in a centralized place that people could easily get to by public transportation.

"Most importantly, we must employ cultural humility in our work and partner with the transgender, nonbinary, gender-diverse community to elevate their voices," said Newton. "[To] strengthen community through the lens of solidarity and together drive social transformation."

Results
Yeager and city officials couldn't be prouder of the result.

"It just really shows in Santa Clara County when we have a vision, we can actually carry it out," he said. "I'm so proud of the county and their support of the LGBTQ community."

Supervisor Cindy Chavez, the board's vice president, said the county's investment in the project was key.

"This has to do with leadership and leadership that believes in civil rights and recognizes that all of our services have to be reflective of our entire community," said Chavez during a news conference before touring the facility. "What's important about this is that we are not just talking about doing the right thing, that we are investing resources."

As a local leader, it was one thing to talk about how important a community was, but "it was a completely different thing and a more respectful thing to invest," Chavez continued.

Supervisor Susan Ellenberg, a straight ally who replaced Yeager on the board and is the vice chair of the board's Health and Hospital Committee, was also on hand.

"The way in which a community treats its most vulnerable members really speaks volumes about the culture of that community," said Ellenberg, noting that the center's opening was "one more avenue to ensure that we are meeting the health-related needs of every single community member.

"Today, the county of Santa Clara is building further on our culture of inclusion and that is indeed worth celebrating," she added.

Before finding services at the health center, Valotea and his friends created their own patchwork network of care providers, he said. They would refer each other to the best doctors they could find who wouldn't discriminate against them or refuse to answer their questions or care they requested.

"I can't really blame a doctor for thinking what's healthier for you, but I can disagree," said Valotea about his efforts searching for transgender-sensitive medical care.

At the clinic, he has been able to work in partnership with his doctor for his medical needs, he said. He feels safe to make suggestions to his doctor and if his doctor doesn't know the answer, he can research it and discuss his findings with him, Valotea said.

Welcoming patients
Since November 2018, the clinic has been ramping up services for patients at Valley Health Center's downtown campus, the newest facility in Santa Clara County's health care and medical network, and began accepting patients during its soft opening.

The clinic is located in a small office at Valley Health Center at 777 East Santa Clara Street and consists of an administrative area and patient exam rooms on the third level of the center.

A cadre of medical providers has cared for patients like Valotea, who has been seeing a doctor who is a part of the clinic for about two years.

The gender health center currently provides services to an estimated 100 patients, according to the County of Santa Clara Health System. Care is provided based on a patient's health insurance.

Currently, there is a waitlist for new patients, however, Martinez and Newton invite gender-variant individuals living in the South Bay to make an appointment.

Newton said that medical providers at the clinic take two approaches: trauma informed and gender-affirming services to help patients feel safe and comfortable to manage their care with their doctor.

Currently, the clinic has three primary care providers, one OB-GYN, one psychologist, one psychiatrist, and one medical social worker. Two nurses assist them. A health center manager and an assistant nurse manager oversee the clinic, said Newton.

The clinic is currently looking for a health education specialist and additional psychiatry and psychology professionals to join its team, she added.

"So, it's a very large medical and psychosocial team," said Newton, who with the support of Martinez launched a program to provide health care services to homeless transgender patients at the Valley Homeless Health Care Program in 2016.

The medical professionals work together in a collaborated effort "across the health and hospital system" so that transgender patients at any access point "can receive respectful dignified care," said Newton.

"Our goal is that care exists in custody, in emergency psychiatric services, behavioral health and substance abuse treatment services, and housing," she added.

"The medical is a small piece to a larger movement of combatting social injustice and driving transformation," said Newton, noting the thought and care that went into planning the clinic from designing a welcoming space to the friendly greeting when patients enter the clinic to the services being provided.

"What I love about this clinic is that it is a beautiful bright space that is new," said Newton. "That shows the community that they matter. That they deserve a beautiful building."

"I just hope people come and partner with us and tell us how to do better," she added.

Updated, 2/25/29: This article was updated to include the correct phone number for the gender center.