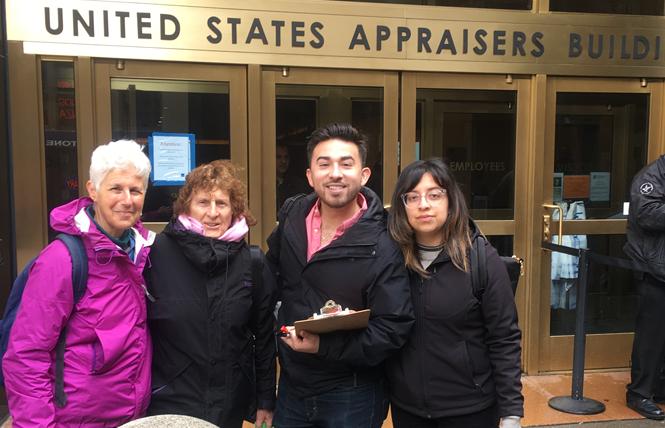 Activists from Pangea Legal Services assemble outside Immigration Court before doing court support for Aida Carolina Andrade-Amaya, an El Salvadorian mother who has been separated from her U.S. citizen child. Photo: Christina A. DiEdoardo

While much of the city was rushing for last-minute gifts on a rainy Valentine's Day, a small group of activists with Pangea Legal Services, a nonprofit law firm that provides free and reduced cost representation to immigrants in removal proceedings, showed their love in a much more direct fashion — by showing up to support Aida Carolina Andrade-Amaya, who has been in Immigration and Customs Enforcement custody since last November.

Andrade-Amaya, whom the government separated from her prematurely-born baby and other U.S. citizen children, was on calendar at Immigration Court for a bond hearing. Depending on what U.S. Immigration Judge Julie L. Nelson ultimately decides, Andrade-Amaya might be released to her family and children while her removal case proceeds.

Unfortunately, this case is more complex than most. The government of El Salvador, where Andrade-Amaya is from, wants her on charges of aggravated theft and robbery and asked Interpol to issue a Red Notice, which is the international arrest warrant that the United States originally relied on to detain her.

"I recognize there are unique issues in this case because of the arrest warrant from El Salvador," said Nelson on February 14.

To the United States, the underlying El Salvadorian arrest warrant — which it presented to the court just before the hearing — resolves the question of whether she should receive bail, much less remain in America, in the negative.

To her advocates, the warrant needs to be viewed in the context of conditions in Andrade-Amaya's home country. For the last two and a half decades, El Salvador has struggled with increasing violence driven by its maras, or gangs, many of which originally formed from persons deported from the United States for gang activity in Los Angeles and elsewhere. There are no prizes for guessing that those connected with the maras — or those with money or political pull — typically don't face judicial consequences for their alleged actions.

Even the U.S. State Department concedes that "corruption undermines credibility" in the El Salvadorian justice system, which "is still heavily under-sourced and overwhelmed by the volume of cases," according to a 2018 report. As often happens historically in these situations, police in El Salvador have further been accused of involvement with extrajudicial killings of prisoners and suspects and other illegal acts.

For that reason, lawyers for Andrade-Amaya are seeking to introduce additional expert testimony to help the court understand what it's dealing with — and why a warrant from El Salvador might not be entitled to the same deference as one from a country with a functional judicial system. If that fails, they still may have a shot at keeping her in the country with her family if they can persuade Nelson that Andrade-Amaya is likely to be tortured.

But all that required a lot more time to hear evidence and review documents than the court had that Thursday, so Andrade-Amaya's Valentine's Day ended where it began, in an immigration lockup far from her family.

While hers is just one note in the sorry symphony of America's failure to build a fair and equitable immigration system, it's a note worth remembering for this reason. Every dollar spent for "border security" or a "smart wall" or "enhanced immigration enforcement" ultimately means more Andrade-Amayas ripped away from their premature newborns. There's a human cost to the use of euphemisms some utter to make themselves feel better about "compromising" with a regime in Washington that's both openly racist and nativist — and it's not being paid by the Nancy Pelosis and Chuck Schumers of the world, but by desperate people like Andrade-Amaya with nowhere else to go.

The activists from Pangea understand that, which is why they do court support for Andrade-Amaya and their other clients in similar circumstances. Maybe the day will come when more people who aren't directly impacted by the crisis in our immigration system will do so as well.

Rise up against racism
At 1 p.m. Saturday, February 23, at New Valencia Hall at 747 Polk Street in San Francisco, the Freedom Socialist Party Bay Area will present "San Francisco City Workers Rise Up Against Racism," a discussion by city employees and union activists fighting back against what they describe as racially-motivated discrimination, bullying and harassment by management. Organizers are asking a $3-$5 donation for the talk and a $10 donation for lunch, which will be served from 1 to 2:30 p.m., with the presentation following thereafter.