Transmissions: Heroic in its normalcy 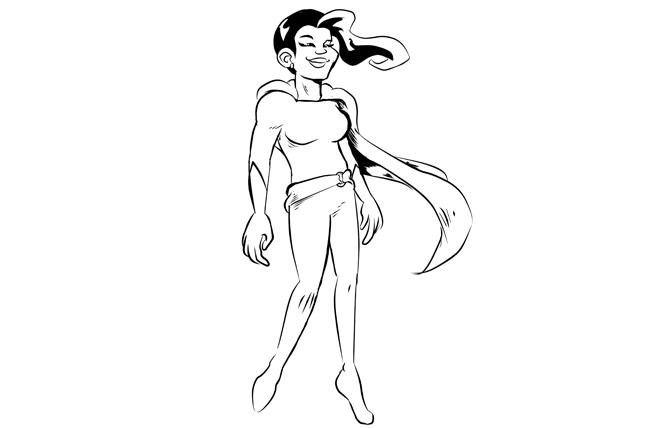 "Supergirl," the television show based on the comic book character of the same name, is currently in its fourth season on the CW Television Network. It is part of the so-called Arrowverse of DC Comics-based TV shows that began with 2012's premier of "Arrow," and includes "The Flash," "Vixen," "Legends of Tomorrow," and "Freedom Fighters: The Ray."

The current season of "Supergirl" has centered its current arc on bigotry against extraterrestrials, of which — for those who are not familiar at all with the comic book background of the characters — Supergirl, also known as Kara, is one.

The new season has also introduced a new character to the story: Nia Nal. She too is a superhero, known as Dreamer, who possesses precognitive powers. Unlike the comic book, this version of Nia Nal/Dreamer is transgender. What's more, the character is portrayed by Nicole Maines who is herself a transgender woman.

"Supergirl" is not the first scripted TV show where a transgender person has been cast in a transgender role: The first such that I know of was Jessica Crockett back in 2001, who played Louise in an episode of James Cameron's "Dark Angel" series.

Since then, we've seen other examples, with Laverne Cox as Sophia Burset in Netflix's "Orange is the New Black" and Cameron Wirth in CBS' "Doubt;" Indya Moore, Mj Rodriguez, and more on FX's "Pose;" Scott Turner Schofield on "The Bold and the Beautiful" in 2015; Jamie Clayton's portrayal of Nomi Marks on Netflix's "Sense8;" and a few others. This, of course, does not include trans people appearing in reality TV and other such venues.

Transgender people had been hard to come by in comics, at least as superheroes. A lot of early examples are more "shapeshifting" characters, including at least one in the "Supergirl" series in 1997, though one can find Kate Godwin/Coagula in 1993's "Doom Patrol" and Masquerade in "Blood Syndicate" back in 1994, both from DC, and a handful of more modern examples.

Nevertheless, the casting of an actual transgender person to play a superhero on a weekly TV show is still a big step forward, especially in an era dominated by superhero movies and television shows.

I want to contrast Nia Nal/Dreamer with so many other film and television portrayals of transgender characters. She comes across as authentically transgender in a way you see in other performances with a trans actor in a trans role — and don't see when Jared Leto portrays Rayon in "Dallas Buyers Club," Eddie Redmayne plays Lili Elbe in "The Danish Girl," or Jeffrey Tambor plays Maura Pfefferman on "Transparent."

The character of Nia Nal/Dreamer was introduced into the series, and her transgender identity has been in the forefront. This has not been a "Dumbledore is gay, but I never actually show it in the books" J.K. Rowling-style move.

I suppose it would be wise at this point to say that there are spoilers ahead.

Nal first came out to her boss James Olsen on "Supergirl," using her experiences as a trans woman to explain why the company should take a stand against anti-extraterrestrial sentiment, a plea that falls largely on deaf ears. It is, nevertheless, handled well in the story.

The next episode focuses on Nia Nal's/Dreamer's backstory, as she and Kara/Supergirl travel to Nal's hometown.

Nal's "coming out" to Kara on the way to Nal's hometown was, well, pretty close to how I handle coming out. It was very matter of fact, just a part of the discussion between two close friends. It wasn't treated as a big deal by Nal, nor did it include a lot of over the top backstory.

I think Kara was a bit patronizing at first when Nal came out, but I also think it was intentional to the story and some of what Kara herself was dealing with at the time.

The storyline of the episode hit a lot of right notes, and the biggest to me is this: while Nal's transness was integral to the plot, it wasn't the only thing the story was about. It was a part of a larger whole, an element of an otherwise well-told story. She is a trans character, but her being trans isn't the only thing she is. It informs her choices, but she is more than a cardboard cutout standing in for a real backstory.

I would be remiss if I did not mention one scene in particular, where Nal's sister, fueled by anger at not getting the superpowers that are passed down between mothers and daughters, attacks Nal for not being a "real woman." While this gets resolved, and maybe a bit quickly, it is handled well, without it being the sole defining characteristic of their relationship.

As I said, Maines is not the first trans actress to play a trans character — but what truly feels refreshing about her isn't so much that she is transgender, but that her transgender identity isn't treated as that big a deal. Yes, it informs the issues of bigotry in the main storyline, but that bigotry isn't necessarily aimed at her as a trans woman.

This is another contrast to the usual portrayal that tends to treat transgender people as someone to be either pitied or reviled — and not the hero of the story, even when they may be the lead character.

Would that we see more of this to come.

Gwen Smith wants to see a trans person in the Marvel Cinematic Universe. You can find her at www.gwensmith.com.