Appel, Bernstein recovering after being hit by car 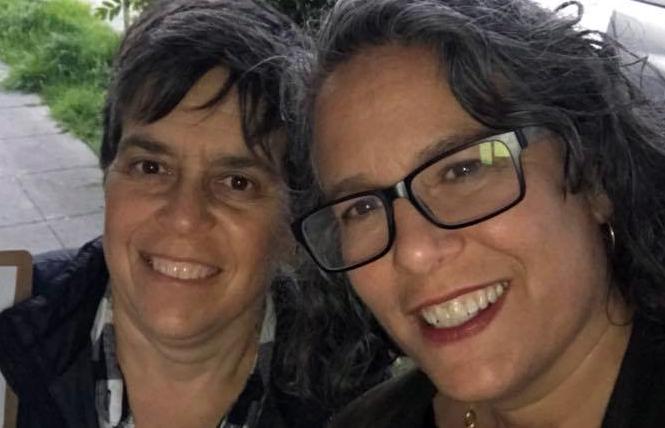 After suffering severe injuries from being hit by a car while walking to their Berkeley home in early January, Judy Appel, president of the Berkeley school board, and her wife, attorney Alison Bernstein, are improving.

Martin Rawlings-Fein, a friend of the couple, posted an update on his Facebook page Friday, February 1, that came from the Appel-Bernstein family.

"We are happy to report that both Judy and Alison are now much more stable," the statement read. "The focus now has shifted to rehabilitation. Both are speaking and eating a little bit, as well as moving around more and more each day.

"As always, thank you for your generous expressions of love, support, and offers of help for Alison, Judy, and their families," the statement read.

That was an apparent improvement from a January 28 message from the family that stated Appel remained in the intensive care unit at Highland Hospital, while Bernstein's recovery was moving to rehab. It now appears both women's recovery now involves rehabilitation.

Appel and Bernstein, ages 53 and 54, were crossing Martin Luther King Jr. Way in a crosswalk near Stuart Street walking home when they were struck by a northbound vehicle shortly after midnight January 5, according to Officer Bryon White, public information officer for the Berkeley Police Department.

The couple, who have two children, were hit by an 81-year-old man who lives in Berkeley, police said. The man is cooperating with investigators. No arrests have been made.

"The primary collision factor of the collision was a failure to yield the right of way to a pedestrian crossing the roadway within any marked crosswalk," White wrote in an email to the Bay Area Reporter last week. "We were still waiting for test results of the driver's blood sample for a definitive answer about closing the investigation."

Bernstein is a senior deputy attorney with the Office of the State Public Defender, where she represents capitally sentenced men and women in both direct appeal and state habeas proceedings. She has spent over 16 years at the office, according to her LinkedIn profile.

A GoFundMe account has been set up for the women's medical costs and has raised nearly $14,000 as of February 4.

To donate to the couple's medical expenses, visit the GoFundMe page at https://bit.ly/2FmK5Ie.