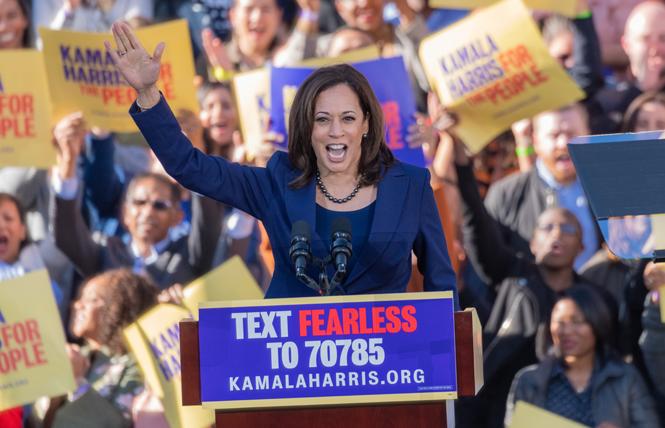 Senator Kamala Harris returned to her hometown Sunday to formally kick off her 2020 presidential bid and told the thousands of people that packed Frank Ogawa Plaza outside Oakland City Hall that she would use her "fighting spirit" to work for all Americans if elected.

Under sunny skies and plenty of security, Harris, the junior senator from California, addressed a crowd estimated by her campaign at more than 20,000, as well as a television audience. She is seeking the Democratic nomination amid a crowded field that is expected to see even more candidates in the coming weeks.

While she did not mention President Donald Trump by name, Harris, 54, came out swinging, decrying what the country has become under his administration. She also recalled her start as a prosecutor — in Alameda County and San Francisco, where she became district attorney.
"My whole life, I've only had one client: the people," she said.

"For the people meant fighting transnational gangs who traffic in drugs and guns and human beings," she said. "And I saw their sophistication, their persistence, and their ruthlessness.

"And folks, on the subject of transnational gangs, let's be perfectly clear: the president's medieval vanity project is not going to stop them," she said, referring to Trump's wall along the U.S.-Mexican border.

Harris' 35-minute speech touched on her background, issues of importance to Democratic voters, and acknowledgments that America is in need of new leadership.

"And in this moment, we must all speak truth about what's happening," she said. "Seek truth, speak truth, and fight for the truth. So let's speak some truth, shall we?"

She mentioned record student loan and other debt many Americans are dealing with.
"The truth is our people are drowning in debt," she said.

Harris, who is African-American and Indian, said, "And let's speak an uncomfortable but honest truth with one another: racism, sexism, anti-Semitism, homophobia, and transphobia are real in this country. They are age-old forms of hate with new fuel. And we need to speak that truth so we can deal with it."

She also talked about how "too many unarmed black men and women are killed in America. Too many black and brown Americans are locked up. From mass incarceration to cash bail to policing, our criminal justice system needs drastic repair. Let's speak that truth."

Early on in her speech Harris was briefly heckled, after she talked about "the profound impact law enforcement has on people's lives, and its responsibility to give them safety and dignity." But the crowd immediately started chanting, "Kamala, Kamala," and the heckling ended.

She talked about how women don't earn as much as men.

She took on big pharmaceutical companies, saying they have "unleashed an opioid crisis from the California coast to the mountains of West Virginia. And people, once and for all we have got to call drug addiction for what it is: a national public health emergency. And we don't need another War on Drugs."

While criticizing the Trump administration, Harris said that America's standing in the world "has never been weaker."

"Democratic values are under attack around the globe," she added. "When authoritarianism is on the march. When nuclear proliferation is on the rise. We have foreign powers infecting the White House like malware."

Harris started out her career as an Alameda County assistant district attorney, where she specialized in prosecuting child sexual assault cases. In 1998, she joined the San Francisco District Attorney's office, where she led the Career Criminal Unit. She also served as the head of the San Francisco City Attorney's Division on Children and Families.

She ran for San Francisco district attorney in 2003, knocking off two-term incumbent Terence Hallinan. She was easily re-elected in 2007.

While she was DA, she convened one of the first conferences to tackle the so-called gay panic or trans panic defense. In those defenses, defendants claim to have been driven to murder someone because they panic when they find out the victim is a transgender person or a gay man or lesbian.

Harris ran for California attorney general in 2010 and narrowly won. She was re-elected four years later.

Harris is a longtime ally to the LGBT community. As state attorney general, she refused to defend Proposition 8, the state's same-sex marriage ban, setting up years of litigation that ultimately decided the measure was unconstitutional. Same-sex marriage became legal in California in June 2013, and Harris was in San Francisco City Hall on June 28 to marry the plaintiff couple in the federal lawsuit, Kristin Perry and Sandra Stier. 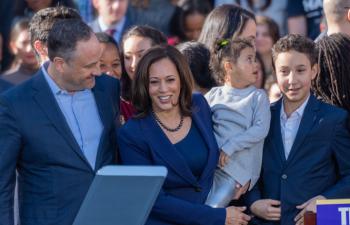 Senator Kamala Harris got a hug from her husband, Douglas Emhoff, left, as she holds her niece, Amara, after formally launching her 2020 presidential bid at Frank Ogawa Plaza in Oakland Sunday, January 27. Photo: Jane Philomen Cleland

Praise
Supporters of Harris praised the candidate, saying she has what it takes to win the Democratic nomination and the White House.

"I've known her for about 20 years, from when she and I were colleagues in the city attorney's office," gay state Senator Scott Wiener (D-San Francisco) told the Bay Area Reporter. "I've seen her grow as a leader and think she'll be fantastic."

Lieutenant Governor Eleni Kounalakis and her husband, Markos, were on hand, though she said she has not yet endorsed in the race.

One person who did endorse Harris was Oakland Mayor Libby Schaaf, who gave brief remarks from the stage.

"I'm so proud to endorse Kamala Harris as the next president of the United States," Schaaf said.

Before the rally, the mayor told the B.A.R., "She is the right candidate for this moment in U.S. history."

Addressing the crowd, Schaaf said she first met Harris 23 years ago when Harris was a young professionals representative on the board of the San Francisco Museum of Modern Art and Schaaf was starting a program for Oakland public school students. That led to an internship program at SFMOMA for the students at Cole Middle School in West Oakland.

"I can tell you that partnership opened worlds of opportunity for our West Oakland children," she said.

Tony Winnicker, a gay man who used to work for the late San Francisco mayor Ed Lee, was at the rally as a supporter, he told the B.A.R.

"She's an antidote to everything wrong with Trump," he said of Harris. "I think everyone in the Bay Area is excited. It's not everyday that a hometown woman runs for president. As a gay man, we couldn't have a better chance for equality than Kamala Harris."