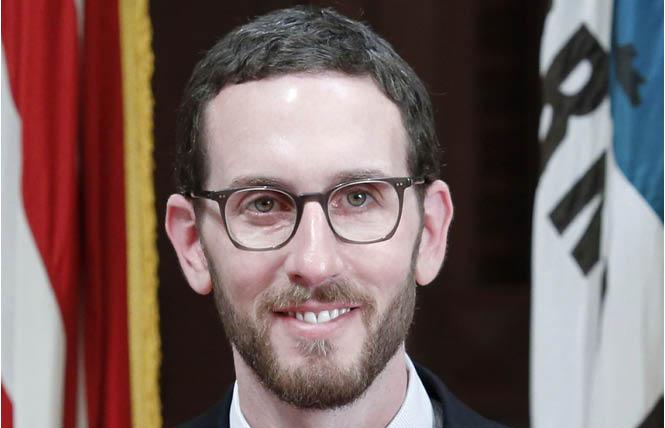 The proposal, which the Bay Area Reporter first reported on in December, is currently in intent form, which means the bill's precise details will continue to be developed over the coming months. Senate Bill 159 authorizes pharmacists to furnish PrEP, or pre-exposure prophylaxis, and post-exposure prophylaxis, or PEP, to patients without a physician prescription. The lawmakers, both gay men, noted in a news release that pharmacists are already authorized to furnish birth control pills without a prescription.

The legislation also prohibits insurance companies from requiring patients to obtain prior authorization before using their insurance benefits to obtain PrEP or PEP.

PrEP is a once-daily pill for HIV-negative people that, if used as prescribed, dramatically reduces the chance of HIV infection. While it has been approved since 2012, research has shown that disparities remain in terms of men who have sex with men using it.

PEP is a 28-day course of drugs that, if started within 72 hours after exposure to HIV, significantly reduces risk of infection.

"Too many people continue to become HIV-positive, and we must do everything in our power to increase access to PrEP and PEP and thus, end new HIV infection," Wiener said in a January 24 news release. "By allowing pharmacists to furnish these revolutionary medicines without a prescription, we will help more people — especially low-income people and people of color — stay negative."

As the Bay Area Reporter noted in an article last fall, while records often do not include information on race and ethnicity, available data suggest that African-Americans are underrepresented among PrEP users.

Wiener added that insurance pre-authorization requirements for PrEP "serve no actual purpose and create significant barriers to access the medication."

"We know what it takes to prevent HIV, and we know that PrEP and PEP are key prevention strategies," he said.

For years, medical and public health professionals, as well as HIV advocates, have demonstrated the efficacy of PrEP and PEP in dramatically reducing the transmission of HIV. The news release noted that the California Department of Public Health, Office of AIDS, estimates there are 220,000 to 240,000 Californians with an indication for PrEP, but data suggest that only 9,000 people were taking PrEP in late 2016.

A report from the California HIV/AIDS Policy Research Centers found that, while new HIV infections have decreased, there is still a large disparity between black and Latino gay men and their white counterparts. Latino men were almost twice as likely to contract HIV as white men, and black men were over three times as likely.

"While many still do not know about PrEP, its ability to prevent HIV transmission has been well proven," Gloria said in the release.

PrEP and PEP are covered by most private insurance programs, as well as by Medicare, Medi-Cal, and Covered California health plans.

"There should be nothing blocking people from tools that prevent HIV infection," Joe Hollendoner, CEO of the San Francisco AIDS Foundation, said in the release. "Streamlined PrEP and PEP access must be part of the plan if California hopes to end the HIV epidemic in all communities."

Aaron Fox, director of government relations for the Los Angeles LGBT Center, said, "While PrEP and PEP have now been available for many years, awareness and utilization remain low — especially among those most at risk for HIV."

Veronica Bandy, president of the California Pharmacists Association, said in the release that community pharmacists are the face of neighborhood health care and provide access to important health services for millions of Californians.

"This bill would allow pharmacists to initiate and furnish PrEP, a life-saving medication, for the prevention of HIV," Bandy stated. "The California Pharmacists Association is pleased to co-sponsor this important legislation with Senator Wiener to ensure Californians have expanded access to PrEP."

In addition to the pharmacists association, co-sponsors include SFAF, the LA center, and Equality California. The bill is supported by the United Nurses Association of California/Union of Health Care Professionals and United Food and Commercial Workers. It is co-authored by Assemblyman David Chiu (D-San Francisco).