Appel, Bernstein remain in serious condition after struck by car 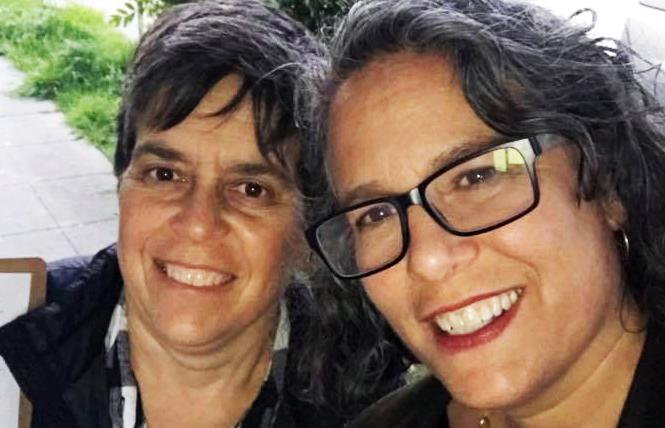 Alison Bernstein, left, and her wife, Judy Appel, were seriously injured when they were struck by a car early Saturday in Berkeley. Photo: Courtesy Facebook

Judy Appel, president of the Berkeley school board, remains in the Intensive Care Unit at Highland Hospital in Oakland, while her wife, attorney Alison Bernstein, has improved and is in rehabilitation, after being hit by a car while walking a block from their home January 5, according to an online community group set up by friends and family of the couple at http://www.lotsahelpinghands.com.

"Judy is still in the Highland Hospital ICU, working hard to heal from her injuries. Alison's recovery is moving into the rehab stage, and for that we are immensely grateful," stated the January 25 post to the community site.

Appel and Bernstein, ages 53 and 54, were crossing Martin Luther King Jr. Way in a crosswalk near Stuart Street when they were struck by a northbound vehicle shortly after midnight January 5, according to Officer Bryon White, public information officer for the Berkeley Police Department.

The couple, who have two children, were hit by an 81-year-old man who lives in Berkeley, police said. The man is cooperating with investigators. The cause of the crash is still unknown and is under active investigation, White said. No arrests have been made.

A GoFundMe account has been set up for the women's medical costs and has raised nearly $4,000 as of Tuesday.

"We are deeply distressed to report that Berkeley school board President Judy Appel and her wife, Alison Bernstein, were seriously injured on Saturday, January 5, shortly after midnight, when they were struck by a vehicle as they were walking in Berkeley," Evans said in an email statement. "We will be offering whatever support and assistance we can to the Appel-Bernstein family. We ask the community to join with us in our hopes and prayers for their recovery."

He added that school board Vice President Beatriz Leyva-Cutler will preside over meetings while Appel recovers.

Lesbian Berkley City Councilwoman Lori Droste, a close friend of Appel's, told the B.A.R. that she was devastated by the news.

"I immediately thought about their children," said Droste Monday. "It was really surprising and really sad. We're all still being hopeful and optimistic for their recovery."

She said numerous people have reached out to her hoping to help the family.

For the past year and a half, Appel has served as director of special projects for the Jonathan Logan Family Foundation, which supports nonprofits that advance social justice. Appel formerly led the LGBT nonprofit Our Family Coalition as executive director for more than a decade before she stepped down in the fall of 2016. Under Appel's leadership, the organization worked throughout California to create LGBT-welcoming and inclusive schools. She also helped pass the Modern Family Act, legislation that created an easier pathway for LGBTs to become parents and help protect their families, according to her campaign website.

Renata Moreira, executive director of Our Family Coalition and a friend of Appel's, was distressed when she first heard the news.

"We were shocked and saddened to hear the news that Judy and her beloved wife, Allison Bernstein, were seriously injured in an accident in Berkeley this weekend," Moreira said on behalf of the organization. "As they fight to recover, and their families get their bearings, we ask all of our friends and neighbors who have been impacted by their decades of public service to keep sending healing thoughts and prayers their way. Our team, board, and members are ready to support Alison, Judy, and their families according to their wishes."

Bernstein is a senior deputy attorney with the Office of the State Public Defender, where she represents capitally sentenced men and women in both direct appeal and state habeas proceedings. She has spent over 16 years at the office, according to her LinkedIn profile. Her decades-long law career began when she was a mitigation investigator at the California Appellate Project before she spent 10 years with the San Francisco Public Defender's office as a trial lawyer.

According to Appel's campaign website, Appel and Bernstein were married three times; the first time in a private ceremony in 1996, then again in 2004 at San Francisco City Hall when then-mayor Gavin Newsom ordered city officials to issue marriage licenses to same-sex couples between February and March. (Those marriages were voided by the California Supreme Court that August.) Their last marriage was in 2013 after same-sex marriage became legal in California.

Friends and acquaintances of the women have been commenting on Facebook sending love and support. Martin Rawlings-Fein, a trans man and former candidate in the San Francisco school board race, wrote on his Facebook page, "Refuah Sheleima to Judy Appel and Alison Bernstein who are in critical condition after being hit by a car last night. May they recover strongly and keep up the good fight."

Mark Coplan, who in a Facebook post said he photographed the couple's 2013 wedding, also offered his support.

"I know we're all remembering the many ways they both have impacted our lives and our community, as we worked side by side with them," the January 7 post read. "They need our energy right now, as we collectively circle them with love."

To donate to the couple's medical expenses, visit the GoFundMe page at https://bit.ly/2FmK5Ie.

Update: 01/28/19: This article has been updated to include the status of Appel and Bernstein's health.