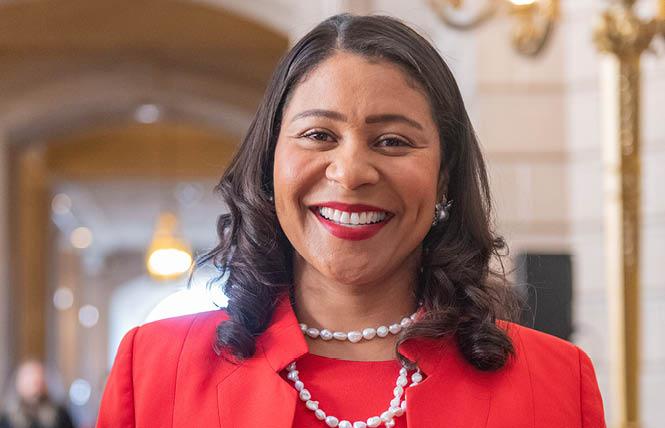 As of Tuesday, there will be a vacancy on the board that oversees the San Francisco Unified School District due to Matt Haney being sworn in as the District 6 supervisor. It will fall to Breed to name someone to Haney's seat, and the person would then run this November to serve out the remainder of his term through 2020.

The Bay Area Reporter had editorialized that Breed should pick Mia Satya, a transgender woman and LGBT activist who ran unsuccessfully for a school board seat in the November election. The editorial argued it would be a powerful pick, particularly since the mayor never publicly rescinded her endorsement of another school board candidate, Josephine Zhao, who suspended her campaign after her past transphobic comments resurfaced.

(As the B.A.R. reported Thursday, Breed said she had privately called on Zhao to quit the race due to her "inappropriate comments." But she said she didn't feel the need to issue a public statement at the time and bring more attention to Zhao.)

Breed seemed disinclined to name Satya to the school board, however, during an editorial board meeting with the B.A.R. in early December.

"Well, Matt is still in the seat," she said at the time in response to being asked about the board vacancy. "I am meeting with people who are interested and will make a decision when the time comes."

In addition to suggesting Satya as a great pick, progressive leaders have also urged Breed to consider appointing Li Miao Lovett, another candidate who lost her bid for a school board seat last fall. There are currently no transgender or Chinese members on the school board, though there is one member from the LGBT community, gay educator Mark Sanchez.

Breed could choose to name one of the two candidates she had endorsed but who did not win school board seats, Michelle Parker or Monica Chinchilla. She named her other endorsed candidate, Faauuga Moliga, to a vacant school board seat weeks ahead of the November election. He went on to win a full four-year term.

In the coming weeks Breed is also expected to name three city department heads to oversee the fire and health departments plus the public library system.

Lesbian former health director Barbara Garcia resigned last summer after questions were raised about a contract granted to her wife's employer. For nearly three decades a gay or lesbian person has overseen the Department of Public Health, which has been on the vanguard of fighting the AIDS epidemic and expanding health care access to all city residents.

Not only will the next health director be expected to continue with the implementation of the city's Getting to Zero strategy, which aims to end nearly all new HIV infections by 2020, they would oversee the opening of a supervised injection site for intravenous drug users should state lawmakers grant San Francisco permission to pilot the program and federal officials fail in their attempts to block it.

"What I am looking for really is someone who can begin really pushing for health challenges that exist in San Francisco, along with social justice," Breed told the B.A.R. "Concentrating a lot of efforts on mental illness. Not just the mental illness of the people we see who clearly are in need of help and that struggle on our streets."

Although she wouldn't say how many people had applied, Breed said, "Let's just say we got a lot of great options."

The Health Commission is reviewing the candidates, and Breed said she expects to name a new director by February.

"I am looking forward to making sure we pick the right person to lead this incredibly important department for our city," she said.

Another key hire will be a new fire chief to succeed Joanne Hayes-White, who said in October she wanted to retire after 15 years overseeing the department. San Francisco Examiner City Hall columnist Joe Fitzgerald Rodriguez reported Thursday that the Fire Commission is expected to recommend three or four of the 35 people who applied for the job to the mayor.

Though he also reported that San Francisco Firefighters Local 798 President-elect Shon Buford had complained in a letter to the oversight body that none of the local firefighters with "fire suppression" experience who threw their hat into the ring were invited in for interviews.

Ken Cleaveland, a gay man who is president of the Fire Commission, declined to comment on the closed session process when contacted by the Examiner, except to say that there are "a number of very qualified people" under consideration.

Breed had told the B.A.R. she wasn't sure when she would make a decision but that it would come after the fire commissioners make their recommendations to her sometime this month.

The search is also on for a successor to Luis Herrera, who stepped down as city librarian last February after nearly 13 years. The city has engaged recruitment firm the Hawkins Company to oversee the application process.

Applicants who send in their resumes by February 15 will be the first to be considered. The library commission will review those who applied and recommend someone for Breed to hire.

As for other department head changes this year, Breed had told the B.A.R. that personnel changes are to be expected when a new mayoral administration comes in. Breed, 44, in June won the special election to serve out the remainder of the late mayor Ed Lee's term through the end of 2019.

"Well, with a new mayor, there are always changes. What I would like to do is, I would like the city to run at its highest level," she said. "I'd like it to be as efficient as possible and want us to deliver. My goal is working with any department head who has the same goals in mind and making changes accordingly."

Breed had briefly served as acting mayor following Lee's sudden death in December 2017 due to her being president of the Board of Supervisors at the time. Her board colleagues, however, last January voted to replace Breed as mayor with former District 2 supervisor Mark Farrell.

They had argued they did not want someone running in the special election to serve in the position. Breed went on to defeat gay former state lawmaker and city supervisor Mark Leno, outgoing District 6 Supervisor Jane Kim, and several other candidates in the June contest.

She is now running for a full four-year term this November. So far, no high-profile progressive candidate has announced a bid to run against her.

Shortly after taking over Room 200 at City Hall in July, Breed had expressed concerns with how the city's transit agency was being run. Asked last month if she was now pleased with the San Francisco Municipal Transportation Agency leadership or if its director, Ed Reiskin, needed to be replaced, Breed demurred from directly answering the question.

She pointed out that the agency's oversight commission has the authority to fire the director. (Though Breed, as mayor, now oversees who serves on it.)

She declined to say if she wanted to replace any city department heads.

"I think my preference is to not talk specifically about, you know, personnel issues, but to be clear that I am going to continue to do everything I can to make sure all departments have the appropriate leadership to deliver for the residents of San Francisco," said Breed.

She stressed that, as mayor, "I didn't come into office looking to just start getting rid of people. I came into office to deliver for the people of San Francisco. Some department heads are doing great at that and some that may not be. It is my responsibility to make those changes accordingly."