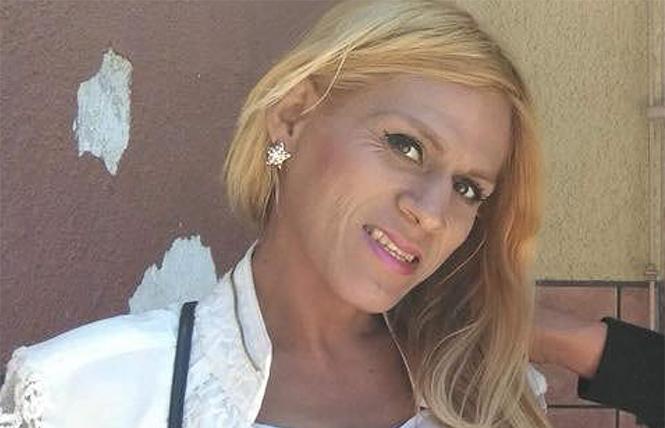 It's imperative that the federal government uphold its responsibilities and release documentation on the death of Roxsana Hernandez, a transgender woman who died while in the custody of Immigration and Customs Enforcement. The Transgender Law Center last month filed a notice of wrongful death tort claim in New Mexico, where she died, the first step in holding all parties responsible for Hernandez's death accountable. Earlier this month, TLC, along with the Law Office of Andrew R. Free, the Black LGBTQIA+ Migrant Project, and Familia: Trans Queer Liberation Movement, received some powerful help from Democratic Senators Kamala Harris (California), Tom Udall (New Mexico), and Martin Heinrich (New Mexico), who sent a letter to ICE acting Director Ronald D. Vitiello, urging the immediate public release of a death review and supporting documentation on Hernandez's case. Vitiello needs to complete this as soon as possible.

Hernandez, 33, was a Honduran and asylum seeker who arrived with a caravan organized by Diversidad Sin Fronteras. She arrived in Tijuana and sought asylum by presenting herself at the San Ysidro Port of Entry in May, according to TLC. She was held in federal custody "in the notoriously cold holding areas, known as 'hieleras,' growing increasingly ill as a result of the inhumane conditions," the agency stated in a news release. "She was repeatedly denied access to medical care she begged for, only able to see a doctor after days of vomiting and diarrhea."

Like the recent deaths of a 7-year-old girl and an 8-year-old boy in the custody of Customs and Border Protection, the federal government is too slow to release information about people who die in their facilities. Although in the case of the boy, who died Christmas Eve, federal authorities issued the information quicker, a result of the fierce criticism agencies took after days of delay on reporting the young girl's death.

In this context, authorities are long overdue in addressing Hernandez's case — she died in May and critical information is still lacking. It's just another example of the Trump administration's anti-immigrant bias combined with its anti-trans agenda.

Disturbing information has come to the attention of TLC after it paid for an independent autopsy. As we previously reported, the autopsy "found that 'Ms. Hernandez endured physical assault and abuse while in custody. Specifically, forensic evidence indicates she was handcuffed so tightly as to cause deep tissue bruising and struck repeatedly on the back and rib cage by an asp [baton] or similar instrument while her hands were restrained behind her back.'"

TLC filed its tort claim because ICE hasn't been forthcoming with information.

"ICE is obligated to release information including the review and autopsy of Roxsana's death," Lynly Egyes, TLC's director of litigation and counsel on the case, told us. "We are waiting for the government to do their job." Egyes added that ICE has surpassed its 30 days after death requirement to release the information.

In their letter, the senators called out ICE and accused the agency of being "uncooperative in releasing information about Ms. Hernandez's death."

"This violates congressional requirements," they wrote. "Congress requires ICE to publish an initial report, for public release, on each in-custody death within 30 days and similarly for a final report within 60 days. It has been over 180 days since Ms. Hernandez was pronounced dead and no such report has been publicly released."

"ICE's failure to release this report diminishes the systemic, traumatic, and in this case fatal, violence that transgender individuals experience daily as a result of their gender identity," the senators wrote.

ICE and the Border Patrol must release their reports immediately. And next month, when the new Congress convenes, it should investigate not only the federal agencies and their officers, but also the contractors involved. Training on sexual orientation and gender identity is also needed, as the senators noted in their letter. More broadly, however, ICE and the Border Patrol must stop mistreating asylum seekers. Since the Trump administration policy requires detaining migrants crossing the border, it must provide humanitarian and medical services to those people. With at least three in-custody deaths, it's glaringly obvious the system is not working as it should.