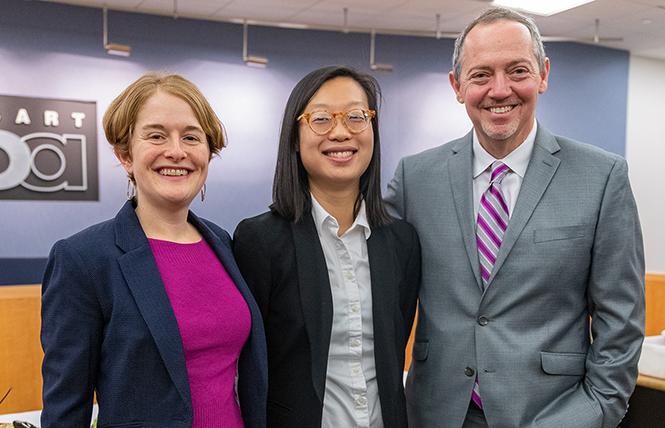 As BART's third out member formally joins the board for her first meeting Thursday, December 20, gay director Bevan Dufty is expected to be named president of the regional transit district's board.

Janice Li, a queer Asian-American woman, was sworn in during a ceremony December 13 in the BART boardroom by outgoing San Francisco Supervisor Jane Kim.

"It was not that long ago, five or six months, when several of us called and urged Janice to run for BART board," Kim said after administering the oath of office. "BART is really the spine of the Bay Area in keeping the region going, and we wanted the best representation from San Francisco."

[Update: Dufty was elected president of the board Thursday and lesbian BART director Rebecca Saltzman was elected vice president.]

Li was elected to BART's District 8 seat, which is in San Francisco and includes the Balboa Park, Embarcadero, and Montgomery stations. She is currently the advocacy director for the San Francisco Bicycle Coalition and said she will keep her day job as the BART position is not full-time.

Kim said that Li once fought off a thief trying to steal her bike.

"That's the kind of representative you want," she quipped.

Li interjected that the incident occurred in Kim's District 6.

Dufty, another early supporter, told the crowd of about 50 people that BART is at a pivotal time in its history. It is attempting several strategies to keep stations clean, deal proactively with homeless people, and get new train cars into service.

"I could watch as people really connected with Janice at Balboa BART," he said. "I'm really excited about this next phase and the best is yet to come."

For her part, Li, 31, a first-time candidate and self-described transit nerd, said she "never thought I'd be here."

She said that she wants the rail system to serve everyone and plans to hit the ground running.

She said that being a queer woman of color elected to office in San Francisco is "not a normal thing." In fact, there is only one other LGBT woman elected in the city: bisexual community college trustee Shanell Williams, who is African-American and recently declared she's running for District 5 supervisor next year.

Rebecca Saltzman, BART's other out director, said the incoming board represents a big change.

"Six years ago, four of the members had served for 16 years. Now, we got three new directors two years ago and three new members this year. I think it's fantastic there's a transit wonk on the board who I can geek out with. Someone who understands the challenges."

UPDATED 12/20/18 with the BART board leadership election results.