Editorial: Time for a gay board president 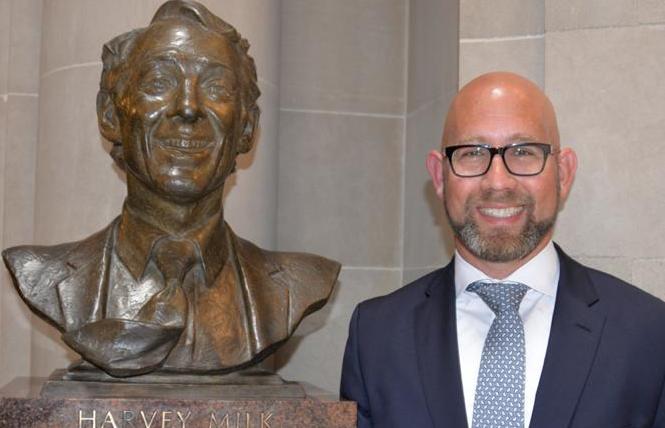 Members of the San Francisco Board of Supervisors are maneuvering for the upcoming board presidency in January, and from the comments on some recent online articles, it's getting ugly. That's uncalled for, and we urge the supervisors and their supporters to dial it down.

The leading candidates appear to be Supervisors Hillary Ronen and Rafael Mandelman. District 10 Supervisor-elect Shamann Walton and District 7 Supervisor Norman Yee are also reportedly in the mix, and there may be others. Unlike the recent election, the vote for president is solely cast by the 11 supervisors, who will choose their new leader January 8, after the swearing in ceremonies.

We think Mandelman would make an excellent board president, and he told us he wants the position. He has experience leading elected bodies, as he was president of the City College of San Francisco Board of Trustees during the height of its accreditation crisis several years ago. In that capacity — even when the board itself had no power and was somewhat fractious — Mandelman demonstrated his maturity and temperament under trying circumstances. Working with the city attorney's office and other state and local officials, Mandelman and the board avoided doom and City College remained open. That was no small feat.

Since joining the board in July, after he won a special election, Mandelman has been attentive to District 8, which includes the Castro, as well as a leader on citywide issues like lobbying for the state conservatorship law that aims to help people who are mentally incapacitated.

Concerns with Ronen
Ronen is a leader of the progressives, but we have concerns about her ability to lead the board with Breed as mayor.

The board president assigns committee members and runs the weekly meetings. More importantly, the president works closely with the mayor, and it's this aspect of the position that is critical today. San Francisco went through a tough mayor's race in June, when London Breed successfully defeated gay former state legislator Mark Leno. As Breed prepares for 2019, including setting the city budget and dealing with issues such as street sanitation, homelessness, and public safety, we think it's important that the board president be someone she can work with.

We're not sure Ronen is in the best position to get as much done with this mayor because of her actions last January. At the time, it was Ronen who made a tearful plea to her colleagues not to select Breed as interim mayor, who by virtue of being board president, was already acting mayor after the untimely death of mayor Ed Lee, and nominated then-supervisor Mark Farrell, a moderate, to replace her. Ronen, however, went a step further, arguing that Breed, an African-American woman, was basically a puppet of white male billionaires like Ron Conway.

"I hate to say it, I wish it weren't so, but those white men are so enthusiastically supporting your candidacy, London Breed," Ronen said at that meeting. "And what you haven't heard because you're not in this inside world we all inhabit in City Hall is that they've been threatening people. They're all saying if you don't support London Breed that people's careers will be ruined. ... It is happening right now in this Board of Supervisors chamber. It happened the morning Ed Lee passed away. That's how gross these people are — because they are gross."

Breed's supporters were outraged that a woman of color was removed as acting mayor, and they rode that anger all the way to the June election that installed her in Room 200. As we editorialized back then, the progressives would have been better off in the long run to have let Breed continue serving.

The next board president will most likely be a progressive since they will have an 8-3 majority. Unlike the past, several of the supervisors, including Mandelman, are not ideologically rigid. In other words, instead of consolidating power, they see the larger goal of solving city problems and are willing to compromise to achieve it. Some seem to equate that ability with being insufficiently progressive. That's ridiculous. Mandelman did not support Breed for mayor, and he has called out the mayor's claims of reducing homelessness. That said, the two can work together. That was demonstrated just after the election, when both of them went to Sacramento to support gay state Senator Scott Wiener's (D-San Francisco) conservatorship bill. At the time, Wiener said the presence of Breed, a member of the city's more moderate wing, and Mandelman, considered a progressive, showed there was broad support in San Francisco for his bill, the San Francisco Chronicle reported. The bill expands conservatorship laws in San Francisco and Los Angeles counties. Governor Jerry Brown signed SB 1045 in September.

Over the years, the number of LGBTs serving on the Board of Supervisors has dwindled to one — Mandelman.

Yes, the board and mayor are sometimes in conflict. There's potential for more agreement with this board and mayor, despite ideological differences, because many of the newer members seem to look at issues first and have a history of taking surprising positions. We don't want to see a polarized board and mayor, with factions pitted against one another as we have in the past. More importantly, from what we've observed since Breed took office in July, residents want her to succeed. We want the legislative and executive branches to work together so that progress can be made on homelessness, Muni, affordable housing, arts funding, HIV/AIDS and increased access to PrEP, and so much more. Mandelman possesses the skills to lead the board and has shown his independence by holding the mayor accountable when appropriate. Mandelman can be that bridge between a moderate mayor and a board that will certainly pursue a progressive agenda.