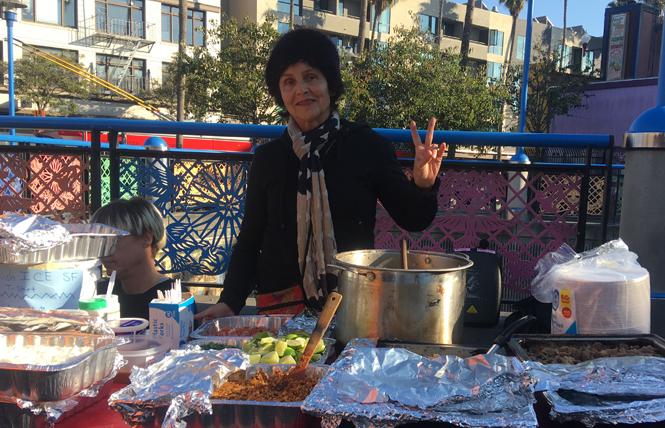 Activists with the Border Liberation Front and Abolish ICE SF serve up barbecue at the 16th and Mission BART station to raise money for Central American refugees. Photo: Christina A. DiEdoardo

In Bay Area activist circles, we often draw — whether consciously or otherwise — a hard distinction between "actions" (which cost money and resources) and "fundraisers." That's what makes a recent action that challenged this binary paradigm remarkable and something we ought to see more of.

On Saturday, December 8, the Border Liberation Front and Abolish ICE SF held a barbecue to raise funds for the members of the refugee caravan from Central America, which is being held in limbo in Mexico thanks to the refusal of American officials to comply with their obligations under international law regarding asylum seekers who present themselves at the border. Indeed, over Thanksgiving weekend the United States violated Mexican sovereignty by firing tear gas into Mexican territory at the refugees, many of whom were women, children, and infants.

Since the U.S. admits using tear gas — a chemical weapon banned in warfare by the Geneva Protocol of 1925, although American police departments use it routinely against anti-fascists across the country — across an international border, one would think this would be the shortest investigation in history. However, the score seems obvious. The Mexican government sent the mildest diplomatic note it could have after its borders were violated because it sees the hundreds of billions of dollars in cross-border trade with the American regime as more important than the lives of refugees from Central America.

As the people on both sides of this artificial line can't rely on their respective governments to solve the problem, mutual aid from groups like the BLF, Abolish ICE SF, and the Caravan Support Network are the only real hope the refugees (most of whom are fleeing the consequences of dirty wars sparked by American policies) have of staying alive until they can get before an American customs official and can request asylum.

The elegant thing is that BLF and Abolish ICE SF didn't stop with just asking for money to support caravan support efforts. By structuring the event as a barbecue with donations requested (and not turning anyone away for their inability to pay) they also managed to feed scores of houseless San Franciscans while raising funds for the caravan members too.

Given the direct-action nature of their work, most of the organizers and volunteers were understandably unwilling to be photographed. Their names are being withheld for the same reason. Still, they showed how it's possible to fill the bellies of the hungry on a local level while simultaneously helping comrades abroad — all the while raising consciousness that the real struggle isn't between those who swear allegiance to a different colored piece of cloth than you do, but between those who have and those who have not. It's an example more local groups ought to follow.

Compassion has no walls
At 11:30 a.m. Friday, December 14, the Interfaith Movement for Human Integrity will hold a vigil at 630 Sansome Street in San Francisco, which is the area headquarters for Immigration and Customs Enforcement, to demand the humanitarian treatment of all migrants in ICE custody.

Educators rising
At 11 a.m. Saturday, December 15, CA Educators Rising will conduct a mass meeting at Omni Commons at 4799 Shattuck Avenue in Oakland to support teachers and to demand full funding of California's schools. Attendees are requested to wear red.

SFPD did not respond to a request for comment.