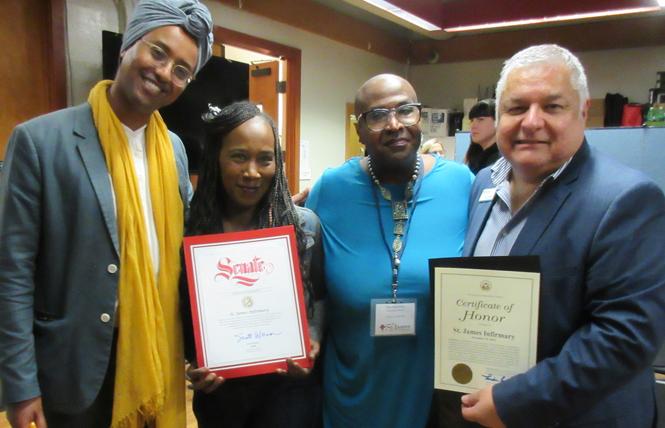 St. James Infirmary, a peer-based clinic for sex workers and their families, has moved to a new location in the Tenderloin shared with other community health and social services agencies. St. James Infirmary held an open house in the new space Thursday, November 29.

"This is a federally qualified health center with brand new facilities so that we can give our clients high-quality health care with our top-notch therapists and medical team," St. James Infirmary Executive Director Toni Newman told the Bay Area Reporter. "Sex workers deserve the very same care that I get from Kaiser with my gold plan. I want to make sure they feel like I feel when I go see my doctor."

The new offices are located at the San Francisco Community Health Center at 730 Polk Street. The space is also home to Shanti Project and Project Open Hand, which owns the building.

Formerly known as the Asian and Pacific Islander Wellness Center, SFCHC changed its name earlier this year to reflect a broader mission. Executive Director Lance Toma told the B.A.R. in February that the center is "committed to the API community, all communities of color, LGBTQ communities, and really, the queerest among us."

"We are excited to be able to offer space to St. James Infirmary," he said. "Our missions are closely aligned and we share a deep commitment to some of the most marginalized and vulnerable in our community and to provide primary medical and behavioral health care that is grounded in social justice."

An itinerant history
St. James Infirmary, named after sex worker activist Margo St. James, started in 1999 at San Francisco City Clinic on 7th Street and opened its own facility at 1372 Mission Street in 2004, in what became a rapidly gentrifying South of Market neighborhood. When the landlord sold that building and St. James Infirmary was forced to move in 2016, the San Francisco Department of Public Health helped the clinic secure a space on Eddy Street in the Tenderloin, but it proved to be far from ideal.

"We were under an SRO and we had leaks and roaches," Newman told the B.A.R., referring to a single-room-occupancy hotel. "We were there for two and a half years and lost about 40 percent of our clients, including people addicted to drugs and others who didn't feel comfortable hanging out there."

In additional to primary medical care, the peer-based organization offers HIV testing and prevention services including PrEP, sexually transmitted disease testing and treatment, gender-affirming therapy for transgender people, mental health care, case management, support groups, and harm reduction services including needle exchange and naloxone to prevent overdoses. It serves people of all genders and sexual orientations and its services are confidential and free of change.

Agency staff explained why having a clinic dedicated to current and former sex workers and their families is so important.

Sex workers face an increasingly hostile national climate, including the passage earlier this year of the Senate's Stop Enabling Sex Traffickers Act and the House's Allow States and Victims to Fight Online Sex Trafficking Act, jointly dubbed SESTA/FOSTA. Advocates say the legislation makes it difficult for sex workers to connect with clients via websites and social media and has forced many into more dangerous working situations including street prostitution.

"This has been the most aggressive year of legislation against sex work in my lifetime," St. James Infirmary deputy director Pike Long told the B.A.R. "This kind of legislation and stigma build on each other. So we think it's more important than ever for sex workers to have a safe space, not only to get services, but also to connect with each other, share resources, and find ways to survive."

Raul Hernandez, the agency's community engagement coordinator, stressed that the organization can't do what it does without both the active participation of sex workers and the contribution of volunteers.

For those who want to help, St. James will hold two volunteer orientations this week, one on Thursday, December 6, from 6 to 8 p.m. and another on Friday, December 7, from 10 a.m. to noon (RSVP to raul@stjamesinfirmary.org or 415-857-2859). Looking further ahead, St. James Infirmary is planning a 20-year anniversary gala June 2.