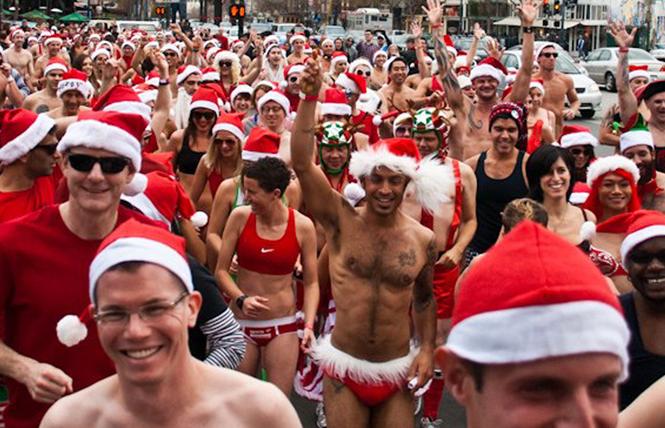 The 10th annual Santa Skivvies Run to benefit the San Francisco AIDS Foundation will be held Sunday, December 9, in the Castro.

The run is a 1.3-mile jaunt through the Castro neighborhood. Runners in holiday costumes or just their undies will check in by the Lookout bar at 16th and Market streets starting at 9:30 a.m., loop through the Castro, then end up on Noe Street between Market and Beaver streets. A strutting contest and block party there will run from noon to 1 p.m.

The run is expected to draw hundreds of participants and has raised more than $500,000 since its start in 2009, SFAF said.

"It's an event that can only happen in San Francisco, and really only in the Castro," said Chris Hastings, owner of the Lookout and founder of the run. "For a lot of people it's become a tradition, allowing them to do something positive in a way that is really out of the ordinary."

Joe Hollendoner, CEO of SFAF, said, "Participants raise funds that are essential to us providing free-of-charge health care services and support programs we provide to more than 25,000 individuals each year."

Sin City registration opens
Registration is open for 22 sports in the 2019 Sin City Classic to be held in January in Las Vegas. Organizers said details are being worked out for registration in esports while diving and bodybuilding assess interest levels to determine whether their competitions will be held.

"Athletes attending the Sin City Classic for the first time are going to be shocked — and hopefully thrilled — at the number of sports available to the LGBTQ athletes and at the size of the crowds at the nightly events," said tournament director Ken Scearce. "The energy of the crowds at both the competition venues and the festival's events is something that impressed so many of the first-timers at the 2018 event."

The multi-sport tournament was originally called the Sin City Shootout when it started as a softball tournament sponsored by the Greater Los Angeles Softball Association in 2008. Over the years it added other sports and steadily drew more participants. A year ago it was locked in a legal dispute with former tournament director Eric Ryan over ownership rights and also changed its name to the Sin City Classic. The 2018 event drew 6,500 athletes in 16 sports, Scearce said. The ownership dispute was resolved with a court filing on March 2, and Scearce said this year organizers expect about 7,000 participants.

"I was part of the original planning team discussions back in 2007 and have been part of the festival since the first one GLASA hosted in 2008," Scearce said. "I was the commissioner of GLASA from 2009-2013, also serving as the executive liaison to the festival, so it was an easy transition to be appointed the festival director by our current commissioner. I am fortunate to have built a base of knowledge and relationships over the past 12 years."

The festival is the largest annual LGBTQ multi-sport event in the world. It does not have opening and closing ceremonies like the Gay Games and it does not move to a new host city every iteration. It is built around the tourism allure of Las Vegas as a travel destination and offers athletes a chance to compete hard, party hard, and meet athletes from other sports as well as their own. Each day of the event offers a magnet social event to bring athletes together.

"One of our core initiatives is to make sure athletes have a safe and fun place to compete and connect through sports," Scearce said. "In 2018, we hosted a bar crawl as the main Thursday night event, our Friday registration event included several fun games and activities such as cornhole (the tossing game, not that other), and our Sunday closing party was hosted at a special events venue that included 32 bowling lanes.

"All of these new events and venues created a fun way to connect through competition at night, not just the competition with their own sport during the day," he added. "After the 2018 event, we realized we needed to add even more fun events to our social schedule because the athletes really enjoyed getting to meet the athletes from the different sports, and it's hard for most venues to handle the size of interest from a festival of our size; hence, we have more event offerings throughout the four-day event."

For information about registration and activities at Sin City, visit http://www.sincityclassic.org.