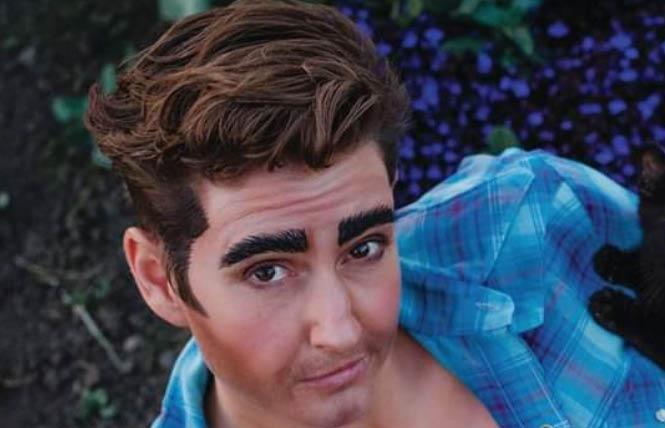 Two drag kings, one of whom recently performed in the Bay Area, are in critical condition after being in a head-on collision in southern Oregon November 23. Elizabeth Real, aka Max Ryder, and Kelly Karaba, aka Hugh Johnson, were headed to a drag show in Seattle, but never made it.

Both were severely injured after a 27-year-old female driver traveling southbound on Highway 199 near Selma, Oregon crossed into the northbound lanes of travel and struck the drag kings' car around 7:30 p.m., according to Captain Tim Fox of the Oregon State Police. That driver, Rogue River resident Briana Varela, was pronounced dead after being flown to Harborview Medical Center in Seattle.

The crash is under investigation. Fox confirmed that Varela was reported as a reckless driver approximately 16 miles prior to the scene of the collision.

Real, who was driving the drag kings' car, was initially transported to Three Rivers Medical Center and later flown to Riverbend Hospital in Eugene, Oregon. Karaba, who lives in Arcata, California, was flown to Rogue Regional Medical Center in Medford, Oregon. According to friends of the drag kings, they both underwent surgery last week.

A GoFundMe account has been set up to raise money for medical costs for Karaba and Real. It's already raised over $14,000. To donate, visit, https://bit.ly/2zPhs3d.

"Kelly Karaba's surgery today was successful ... her femurs are patched up and her jaw is plated and wired shut. Next surgery for her elbow and collarbones is Monday," read Gina Karaba's November 30 Facebook post. "She will be weaned off sedation in the morning, until the surgeries on Monday."

Real, who lives in England, suffered two broken legs, broken feet, and a dislocated shoulder, according to a friend and drag king, Fudgie Frottage of San Francisco.

Kelly Karaba and Real knew one another through the drag king community and met face-to-face for the first time at the Austin International Drag Festival that began November 15, according to their friend Mo Fischer, aka, Mo.B.Dick, also a drag king. Fischer said the pair are just friends and does not believe they are in a romantic relationship.

After Kelly Karaba and Real performed at the Austin festival, they headed to Seattle traveling through California. "It's a horrific thing," Fischer said. "Seeing the scene of the crash, it was a miracle that they are even here today."

Having known them through social media, Fischer also met them for the first time at the event in Austin. "Both are very sweet, very warm, and extraordinary performers."

Frottage, who identifies as nonbinary, knows both drag kings but had only personally communicated, via the web, with Real and said the pair were amazing performers. Frottage was a judge on season two of "King Me, Rise of a Drag King" a drag king competition series on YouTube that Real and Kelly Karaba both competed in and made it to the finals the last three times. Frottage talked about a recent show Real did at the White Horse Bar in Oakland.

"He tore the house down from what everyone said," Frottage said. "He's a really genuine, dedicated performer. A really sweet person, very creative. It's devastating to think that two talented drag kings that have a big future ahead of them are debilitated like this."

They added that Real is self-employed and that the medical expenses will be a hefty burden.

Other LGBT groups in Arcata, located in northern California, have planned fundraising events to help the drag kings. The Times-Standard of Arcata reported that Kara Randolph, who is known locally as Anya Valentine or DJ Anya, is hosting various parties to help support Karaba and Real's medical expenses.

Randolph told the Times-Standard that it is unlikely that Karaba will be able to return to their apartment in Arcata.

Investigators would like to speak to anyone who witnessed Varela's driving behavior or the crash. Anyone with information can call the Oregon State Police dispatch at (541) 776-6111 or OSP and reference case #SP18-435402.

Twitter bans misgendering, deadnaming
As part of an update to its hateful conduct policy, Twitter last month rolled out specific language that banned misgendering and deadnaming of trans individuals.

The new policy states, "We prohibit targeting individuals with repeated slurs, tropes or other content that intends to dehumanize, degrade, or reinforce negative or harmful stereotypes about a protected category. This includes targeted misgendering or deadnaming of transgender individuals."

In September the social media company announced changes to its policy, but it wasn't until a month later that it added the trans-specific language and did not announce the addition. The change went largely unnoticed by the media until a couple of weeks ago.

The most updated policy also includes more detail about threats and references to violence. It now bans the posting of, "media that depicts victims of the Holocaust," or "lynchings."

When the B.A.R. asked Twitter in an email if the move was due to user behavior, spokeswoman Liz Kelley responded, "Online behaviors are always changing, and we work to ensure our policies are reflective of this."

She also emphasized other parts of the policy that specifically address the LGBT community.

"We recognize that if people experience abuse on Twitter, it can jeopardize their ability to express themselves. Research has shown that some groups of people are disproportionately targeted with abuse online. This includes women, people of color, lesbian, gay, bisexual, transgender, queer, intersex, asexual individuals, marginalized and historically underrepresented communities. For those who identify with multiple underrepresented groups, abuse may be more common, more severe in nature and have a higher impact on those targeted," reads the policy. "We are committed to combating abuse motivated by hatred, prejudice or intolerance, particularly abuse that seeks to silence the voices of those who have been historically marginalized."

Shortly after deadnaming and misgendering were banned, Twitter kicked Canadian feminist Meghan Murphy, who runs the website Feminist Current, off its platform, according to the New York Times. The Times reported that Murphy repeatedly called trans women "he" and "him." In one of her lasts tweets, Murphy wrote, "men aren't women," referring to transgender women.

According to the Verge, Twitter also suspended far-right personality Laura Loomer earlier this month. On November 29, the Verge reported that she handcuffed herself to the front doors of Twitter's New York headquarters. She said she was protesting the double standard of the social media platform for allowing anti-Semitic Nation of Islam leader Louis Farrakhan to remain on the site.

At the time, police barricaded the area around Loomer and said, "they have no plans to remove her from the premises, or to press charges," reported the Verge, which also said Twitter has not pressed charges.

On November 28, activist and members of SumOfUs, an international consumer group, and Daily Kos, a progressive online site, went to an investor day event hosted by Quest Diagnostics at the Intercontinental Hotel in New York City to deliver the signatures. The petition demands that the lab testing company refuse to cooperate with the Trump administration's plan to require invasive genetic testing to settle disputes about a person's gender.

Other sites targeted by the petition are Ancestry.com, 23 and Me, National Geographic, and LabCorp.

The petition was in direct response to the administration's efforts to strip federal recognition of trans people. The New York Times reported in October that the administration prepared a proposal to limit the identification of a person's gender to include only "male" or "female" that is listed at birth.

"The Trump administration's attacks on transgender, intersex, and nonbinary people have always been about erasing them from public life," explained Katie Reilly, campaign manager for SumOfUs, in a news release. "This latest attack to define gender, not as a self-determined identity, but as assigned by the federal government based off of genital presentation at birth is sickening. The Trump administration's proposed testing to genetically validate gender identity is state violence, and puts the safety of not only trans people at risk, but also those of intersex people and others who do not fit within the medically-disproven sex binary."

Quest Diagnostics, which did not respond to the B.A.R. before this article was published, serves one in three adult Americans and half the physicians and hospitals in the United States, according to its website. It offers routine biological tests along with complex and specialized molecular and gene-based testing as well as anatomic pathology.

"She gave them her card and says that she wants to meet about the petition," Fiddler wrote in an email response to the B.A.R.

She added, "Daily Kos participated in this action because all LGBTQ+ communities deserve federal civil rights protections, and [October's] leaked DHHS memo indicates that the Trump administration is trying to effectively erase trans people from existence by redefining gender to be strictly biological and determined by genitalia at birth. We hope that Quest Diagnostics will heed the voices of over 100,000 activists and refuse to cooperate with any requests by the Trump administration to administer invasive genetic testing to deny people basic rights."

The Trump administration's reported policy, spearheaded by the Department of Health and Human Services, is to establish a legal definition of sex under Title IX, the federal civil rights law that bans gender discrimination in education programs that receive government financial assistance.

"But Trump's plan will not work without cooperation from genetic testing facilities like Quest Labs. That is why tens of thousands of SumOfUs members are demanding these testing facilities pledge to refuse to cooperate with Trump's inhumane policy proposal," said Reilly. "They must demonstrate that they draw the line at participating in anti-science and human rights attacks on transgender, gender-nonconforming, and intersex people."

Update: 12/05/18: This article has been updated to correct that Fudgie Frottage was a judge on season two of the YoutTube series "King Me, Rise of a Drag King."