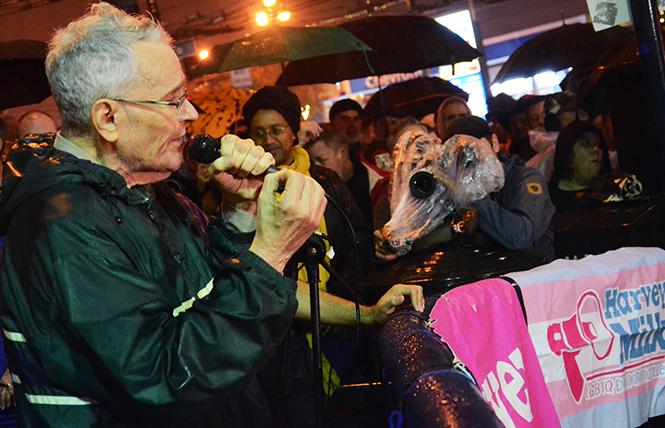 A light, steady rain did not deter about 500 people from gathering in San Francisco Tuesday, November 27, to mark the 40th anniversary of the assassinations of mayor George Moscone and supervisor Harvey Milk, the first openly gay man elected to office in California.

Disgruntled ex-supervisor Dan White snuck into City Hall and killed both men after he asked the mayor for his old job back and was refused.

Joining the crowd that met in the Castro and marched to City Hall was Milk's gay nephew, Stuart Milk; gay former supervisor Harry Britt; activist Cleve Jones; and a number of others who knew Milk personally.

Younger people who had not yet been born when the assassinations took place in 1978 also came out to celebrate the lives of the two men.

"Three years ago Harvey Milk was a character in 'The Mayor of Castro Street,' a book that I read in my little apartment in Denver," Scott Bird, a gay 24-year-old, told the Bay Area Reporter. "I'd been to San Francisco many times but never knew his legacy until reading that book. Every time I came to this city I would come to this street and reflect on that legacy. I had no way of knowing that I would move here, and since I've been here I keep the reverence of that legacy with me.

"I'm honored to be able to light this candle the same way they did 40 years ago in remembrance of the hope that Harvey Milk gave to me and to so many others," he added.

"Thank you all for coming to honor the legacy of two amazing men," she said. "Two men who paved the way for LGBT people, for people of color. Moscone had a partner in Harvey Milk to make sure that everyone was included."

"I think it's important for organizations like the San Francisco Gay Men's Chorus to commemorate anniversaries like this so that people who are my age know where we came from," said gay man Andrew Caldwell, 32.

Caldwell also said that he would like to be able to thank Milk. "I would have loved to have seen what else he could have done with his life," he said.

David A. Diaz, a 53-year-old gay man who just joined the chorus, told the B.A.R. that he was "extremely proud" to have taken part in the evening.

"It's tremendously significant to me to get to be part of something that I think is part of history," Diaz said. "Harvey Milk is my idol and hero. The year I came out was the year the documentary 'The Times of Harvey Milk' was released. He inspired me so much at an early age. I went from being a closeted, confused kid to being a full blown activist a year later."

Friends of Milk who spoke included Britt, who took over Milk's seat on the Board of Supervisors seat after the assassinations.

"The campaign were the best days of my life," said Kronenberg. "We knew we could change the world, and we overcame, we now have gay marriage and things I never thought we'd have in my lifetime. The bullet in his brain opened closet doors and now we have many Harvey Milks."

"It's changed but it's not changed," he said. "We're gassing children and putting them in cages. I want to honor what we've done but I also want change."

Campos did not know Milk, but knows what he stood for.

"He was against injustice against anyone, not just the LGBT community," said Campos. "His message is as relevant today as it was 40 years ago as we see what's happening at the border with tear gas being used on children. Harvey would be outraged and would be speaking out against it."

After the speeches people marched down Market Street from the Castro to City Hall. The mood was quiet, somber, and reflective. There was no chanting. At City Hall there was a moment of silence for Milk and Moscone, after which Jones thanked everyone for coming. There were no speeches.

"This shows me the solidarity of a generation," Hannah Gonsalves, 19, who said she identified as sexually fluid, told the B.A.R. at City Hall. "Harvey Milk is a person we can all look up to. I think like the speakers said — he's important now as much as ever. Harvey Milk made it easier for me. He broke the barriers and made it all possible. I continue the fight."

Gonsalves was accompanied by her friend, Meredith Sheppard, 19, a straight ally.

"I think it's important to show support," said Sheppard. "Everyone deserves to be loved and respected, no matter what their identity. Milk paved the way for people to feel accepted and celebrated."