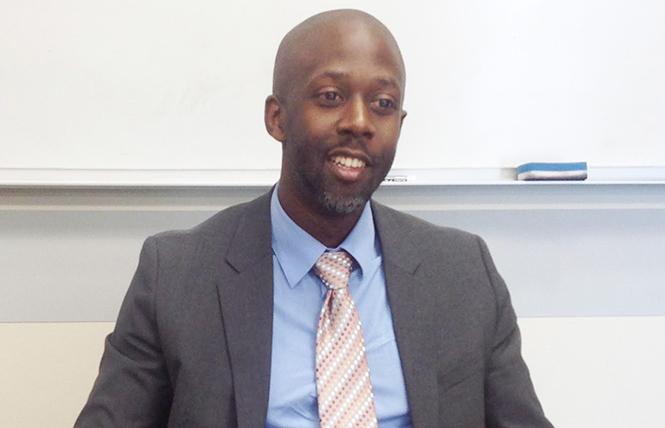 Last week, the Centers for Disease Control and Prevention released its HIV Surveillance Report (https://www.cdc.gov/hiv/library/reports/hiv-surveillance.html). And, like every year in recent memory, the result told us what we already suspected. HIV incidence has improved for nearly all demographics except black gay/bisexual/same-gender loving men and transgender women (GBT). In the United States in 2017, 38,281 people were diagnosed with the virus. As a whole, that is excellent news as the numbers are ticking downward. However, for black gay men and transgender women, the numbers remain horrendous. They account for at least 10,007 of the new infections, which is 26 percent of the new infections in the United States.

Black GBT people account for 0.3 percent of American residents. What does that mean? The national response to the HIV epidemic has continued to utterly fail black GBT individuals.

The data does not lie. Currently, one in two black gay men are predicted to acquire HIV during their lifetime; although black GBT people exhibit fewer behaviors that expose them to HIV. They continue to see unsatisfactory levels of HIV infection and HIV-related deaths. Roscoe Boyd, executive vice president at SLAY TV and steering committee member of the undetectable equals untransmittable, or U=U campaign, proclaimed, "We are in a state of emergency. We need to sound the alarm because the people who have been doing this work should not be there. The predication that half of black gay, bisexual, and transgender people contracting HIV is not definitive."

Many progressive leaders in the HIV field posit that the future of the HIV response does not have to look like the past. One of the most vocal leaders advocating for change is Robert Newells, who is the executive director of AIDS Project East Bay in Oakland. He is clear and direct in his position: "We cannot expect to see any change as long as there is no one leading these organizations who looks like the people sitting in the waiting room." His focus continues to be on meaningful engagement with disproportionately impacted communities. He shared: "I not only look like and love like the people who are getting infected at such high rates, but I also live in their neighborhood. I do not have to be invited to come to their neighborhood when I already live there. For me there is no such thing as a hard-to-reach population." Christopher Hucks-Ortiz, chair of Black Caucus of the HIV Prevention Trials Network, concurred. "It only makes sense that, in order to really provide evidence-based and culturally sound programs and strategies, it requires that we seek leaders who come from these same communities," he said.

We find many people working in the field asking for a different approach. HIV clinician and advocate, Dr. David Malebranche of Morehouse Medical College, said, "Those of us who work in the HIV field need to stop pointing fingers and asking 'what's wrong with these young black men?,' but turn the mirror around and ask 'what's wrong with us?'" He continued, "We need to stop asking for permission to do the work that needs to be done to stop HIV in our communities."

Many black BGT people have become disillusioned by the lack of inclusion in senior leadership in HIV organizations and have left the field. Boyd declared, "We have many black gay men who are excellent in their craft. But we are not allowed to change the field even if it will save the lives of other black gay men."

Some people have begun to redefine the systems that have failed them and their communities. Daniel Driffin co-founded THRIVE SS and serves as director of development. THRIVE SS is an internationally recognized peer support model that provides traditional in-person support to help address the issues that many men who have sex with men of color face surrounding HIV infection. Driffin said, "Thrive SS was created because racism, homophobia, and transphobia keep black gay men and transgender women out of key decision-making roles." He added, "Racism forces us to start new community-based organizations because the structures that currently exist do not allow for innovation and change."

These messages and calls for action are not sitting in a bubble. One of the most prolific qualitative researchers within the transgender community has begun to the set the stage. Tonia Poteat, Ph.D., assistant professor at the University of North Carolina—Chapel Hill, said, "The intersection of transphobia and racism lead to high-risk context and less access to medically and culturally-competent care." She understands how important it is to mentor and make space for transgender people of color. Poteat stated, "Change has to come from the top and has to be infused from the leadership [of HIV service organizations] throughout the staff."

We have proven tools to reduce the rate of new HIV infections that many others have benefited from except black BGT communities. We know from HIV Prevention Trial Network's HPTN 073 that when PrEP, the HIV prevention medication, is made available to black gay men in a culturally competent manner that uptake and sustained utilization follows. We also know that the message of U=U, when shared with all people, including black GBT people, empowers them. However, for far too many black GBT individuals, those messages do not reach them in a way that can be effectively heard. Boyd voiced his concern when he stated, "Our systems do not seek to empower us, but to control us."

No one wants to see only a few groups improve their health outcomes. We want to reach the proverbial mountaintop as one. Our collective hope is that the HIV surveillance report in 2019 will be different than the one just released. We have the opportunity to improve an uncertain future. Hucks-Ortiz declared, "As long as the face of HIV continues to be blacker, younger, and GBT, it is imperative that we also look for new leadership that matches these populations."

George Bernard Shaw once said: "Progress is impossible without change."

We have a choice. The time is now.