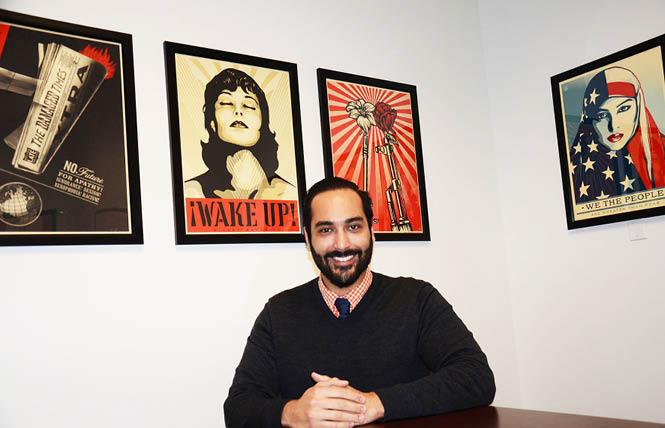 Long Beach native Tom Paulino has had his eye on a career in politics since being accepted to UC Berkeley, where he graduated in 2012 with a degree in a double major of political science and history. The question was how to achieve that goal.

During his junior year in college Paulino was accepted into a UC program that had him intern in the fall of 2010 in the Washington, D.C. office of Congresswoman Linda Chavez (D-Lakewood), whose district includes his hometown. In the spring of 2011 he interned for Bay Area Congresswoman Barbara Lee (D-Oakland) and that summer moved over to the office of California Democratic U.S. Senator Dianne Feinstein.

"I wanted to work in politics, but I didn't know how to do it," recalled Paulino, who landed a job with LinkedIn after he graduated college. "It was great and I loved it. But it also solidified my passion is really in politics."

Having kept in contact with co-workers he had met on Capitol Hill, Paulino heard that Feinstein's office was hiring. He applied but was passed over at first, then applied again and landed a job in February 2014 as a constituent services representative for Feinstein in the Bay Area.

"I wore them out, you know," joked Paulino, who two years ago was promoted to a field representative position.

Now, Paulino is switching gears from federal politics to state matters. Monday, November 19, was his first day on the job as district director for state Assemblyman David Chiu (D-San Francisco).

He is the second Feinstein staffer to be hired by a local political leader for a high profile post in recent months. Her former state director, Sean Elsbernd, was poached by San Francisco Mayor London Breed to be her chief of staff.

"She attracted talented staff, I have to say," said Paulino when asked about the staff departures.

His leaving for a new job wasn't due to his thinking Feinstein would lose her re-election bid this month — the 85-year-old easily bested state Senator Kevin de Leon (D-Los Angeles), who is 51, for a sixth term in Congress — but because of happenstance. He had run into a friend who works for gay state Senator Scott Wiener (D-San Francisco) at an event who suggested he apply for the job with Chiu.

"This opportunity came out of nowhere," said Paulino, 29, a gay man who lives in the upper Haight. "It all happened very quickly. It is a big life change ... Working for the senator has been amazing. I always said I would only leave for something incredible that came along and this is in line with that."

His main focus as district director will be on communication, said Paulino, informing Chiu's constituents about the work he is doing on their behalf in Sacramento and alerting his boss to the needs of the residents of his 17th Assembly District. Chiu represents San Francisco's eastern neighborhoods and was easily re-elected this month to a third two-year term.

"I see the role as a conduit and channel of communication between the needs of the district to the office and to the member," said Paulino, "and vice versa seeing that everything the assemblyman is working on in Sacramento gets communicated to folks in the district."

In a recent editorial board meeting with the Bay Area Reporter, Chiu said he plans to continue to address the needs of the state's homeless population, lack of affordable housing, and restrictions on expanding rent control in the next legislative session. He also wants to assist in the efforts to see California adopt a statewide plan to end the transmission of HIV.

"I am excited to have a new governor who has a demonstrated record in supporting LGBT rights and issues," said Chiu, referring to Governor-elect Gavin Newsom, the state's current lieutenant governor and a former mayor of San Francisco. "There are a number of things we are looking at, such as the challenges of housing for LGBT seniors and the ongoing challenges of LGBT homeless youth."

Chiu added that, "My hope is we have a robust conversation around the HIV and AIDS agenda in Sacramento. The Getting to Zero movement was pioneered here in San Francisco but we are finally launching that statewide. And for the transgender community, there are things we can do in California to protect transgender Californians."

Paying it forward
Paulino used to babysit a cousin who is now 18, transitioning their gender, and is engaged to their partner. It is a striking difference, he said, to his own coming to terms with his sexual orientation.

He didn't come out of the closet until moving to San Francisco six years ago. His family was accepting, especially his mother, who lost her best friend in high school to AIDS and has a gay brother. Unfortunately, Paulino is not close to his uncle, as he is estranged from the family for reasons other than his sexual orientation.

"My mom's exposure at a young age in her life primed her to be the best mom for a gay son," said Paulino. "I am very blessed to have the family and support that I do."
Looking to pay it forward to the next generation of LGBT people, Paulino joined the San Francisco Gay Men's Chorus as an upper baritone nearly four years ago. Next month he will be performing with the chorus in its holiday concerts.

This past spring he joined the chorale group's board as president of membership. Last fall, Paulino helped organize its tour through the South.

"The amount of love and support we were given and shown by folks, gay and straight, white and black, from the city to rural areas, it was just overwhelming," recalled Paulino, who had never before visited the region. "The intent of the project from the beginning was here are these states that have extreme anti-LGBT laws; we need to go there and show people that gay people aren't as scary or crazy as they believe. We were there to support the LGBT community there; we didn't expect how much love came from that community to us."

A believer in the power of government service, Paulino didn't rule out running for elected office himself one day when asked if he was interested in doing so.

"Oh goodness! Someday, who knows," he said. "I was talking to co-workers last week that, when I was working in the office of Linda Chavez, nowhere in my wildest dreams did I thought I would be where I am today. Why not leave a door open."

If he does run for office, it would be in San Francisco, as he has no plans to move back to southern California.

"I feel I became who I was meant to be here," said Paulino.