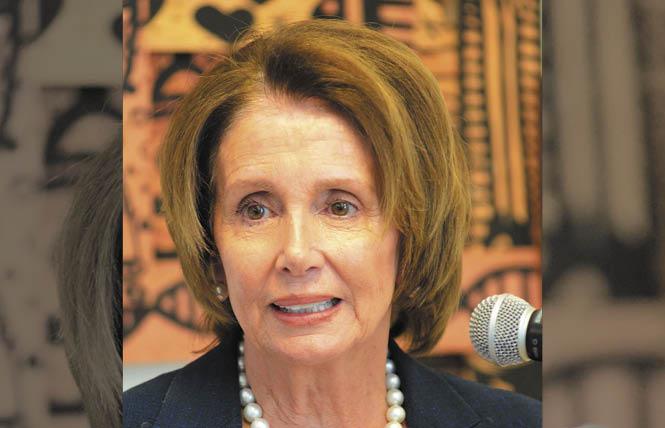 Equality California on Thursday sent a letter to the Golden State's incoming congressional delegation endorsing House Minority Leader Nancy Pelosi (D-San Francisco) for speaker when the Democrats take control of the House of Representatives next year, and urging them to vote for her.

The Democrats are expected to hold a leadership vote November 28. The final vote will be taken when the new Congress convenes in January.

Pelosi, who served as speaker the last time the Democrats controlled the House — 2007-2011 — is seen as the favorite to return to the speaker's chair. But several newly elected Democratic House members outside of California pledged during their campaigns that they would not vote for her. Pelosi has long been used as a foil by Republicans, who equate her with "San Francisco values," which they use derisively in areas outside the state.

"In order to achieve the results that LGBTQ Californians, our allies, and all Americans deserve, we strongly believe that the House must elect a speaker with vision, experience, and a deep commitment to both our California values and our shared values as Americans," Zbur wrote. "That leader is Nancy Pelosi."

The letter highlights some of Pelosi's accomplishments, such as spearheading House passage of the Affordable Care Act and legislation repealing the military's anti-gay "Don't Ask, Don't Tell" policy.

"Nancy Pelosi has helped to improve the lives of countless Americans and has proven her unmatched prowess as a legislator," Zbur wrote.

"She has also proven herself to be a dedicated ally to the LGBTQ community — and the communities to which LGBTQ people belong — since her very first day in office, when she bravely spoke about the need to combat the AIDS crisis in a speech on the House floor," Zbur added.

Zbur said that there is "no one better suited to stand up to the Trump-Pence administration's anti-LGBTQ, anti-immigrant, and anti-woman agenda" than Pelosi. He told the incoming lawmakers that Pelosi would also fight for things such as health care, gun safety, and wildfire relief.

The Washington Post reported Thursday that Pelosi says she has the votes to become speaker despite opposition from more than a dozen Democrats.