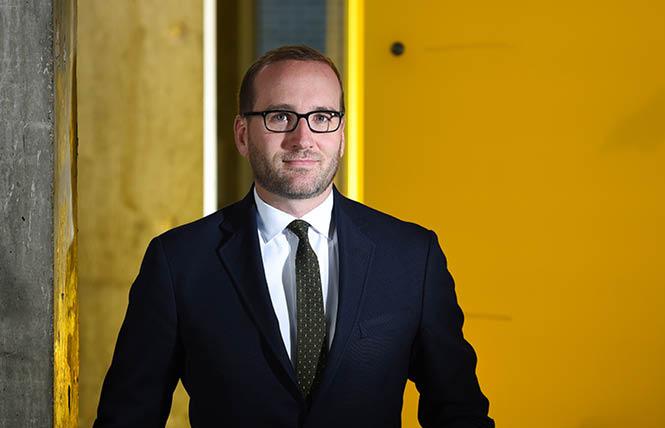 After seven years leading the nation's largest LGBT advocacy group, Human Rights Campaign President Chad Griffin will step down in 2019, the organization announced Thursday (November 15). Griffin, who is gay, will remain in place until the nonprofit finds his successor.

No departure date was given.

"I am so grateful to have had the opportunity to be a part of this incredible organization at such an important moment in the history of our movement — and our nation," Griffin, 45, said in a news release. "While I will be in the HRC family forever, I believe this is the right time for me and for the organization to begin a transition in leadership — with the maximum runway ahead for the next HRC president to prepare for 2020."

HRC did not respond to a request for comment from the Bay Area Reporter as to the specific reason for Griffin's departure or where he is headed next. A search process to replace Griffin will be led by the HRC board.

According to the release, during Griffin's tenure the membership (now at 3 million), staff, and budget of the organization doubled. According to its 2017 IRS Form 990, HRC's budget is just over $45 million. Griffin's salary and benefits totaled just over $500,000.

Before becoming legal nationwide in 2015, Griffin led HRC in the fight for marriage equality. HRC co-chaired the Respect for Marriage Coalition under Griffin and launched the "People's Brief" in support of Obergefell v. Hodges with more signatories than any U.S. Supreme Court amicus brief in history. Obergefell v. Hodges was the landmark Supreme Court ruling that guaranteed same-sex couples to legally marry.

HRC's efforts in the 2018 midterm elections were also a significant contribution of Griffin's. He helped launch the largest grassroots expansion in the organization's 38-year history ahead of Election Night.

"For decades, this organization has shown the world that love conquers hate. But this year, in this election, with the future of our democracy on the ballot and the equality of future generations on the line, we proved that votes conquer hate, too," Griffin said. "Now is the time to fight harder and dig deeper. Because there are still more trails to be blazed. There is still more history to be made and more battles to be won. The LGBTQ community's brightest days and our grandest victories are still ahead of us."

HRC board members spoke about his accomplishments in a news release.

Board chairs Vanessa Benavides and John Ruffier said in a joint statement, "For seven years, Chad Griffin has led the Human Rights Campaign through an incredibly crucial period in our history while building our political influence and momentum for LGBTQ equality. Thanks to Chad, his leadership team and incredibly talented staff, HRC has never been stronger or better positioned to make progress than it is today."

Griffin is originally from Hope, Arkansas and as a young person volunteered at Bill Clinton's campaign headquarters in Little Rock, working in the press office as Dee Dee Myers' intern. He also worked in the West Wing press office of President Clinton's White House at 19.