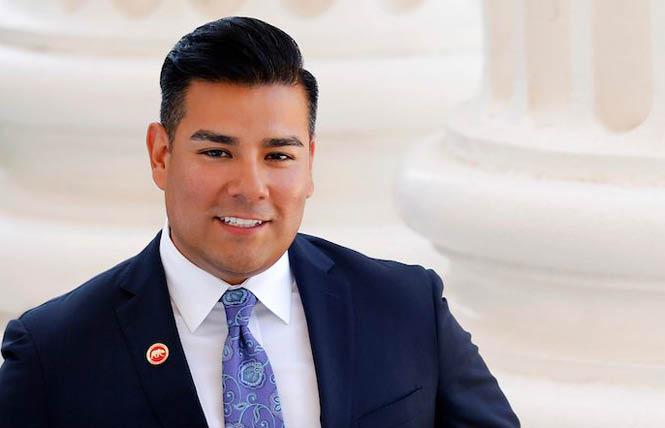 Democrats appear headed to declaring a full sweep of California's statewide races as two contests that had been close for days are now trending toward the party's candidates.

As the Bay Area Reporter first reported online last Thursday, gay state Senator Ricardo Lara (D-Bell Gardens) is poised to make history as the first out candidate to win a statewide post in the Golden State. He continues to hold a commanding lead in the statewide insurance commissioner race.

As of Wednesday morning, Lara had seen his vote count increase to 4,480,114 votes for 51.5 percent of the total. His opponent, Republican turned independent Steve Poizner, trailed behind with 4,221,931 votes, or 48.5 percent of the total. Poizner, who had previously held the position from 2007 through 2011, has fallen further behind Lara since Election Night as more ballots are tabulated.

It is a stunning victory for Lara, who was seen as the underdog heading into Tuesday's election, with some polls showing him losing by double digits. As the B.A.R. has noted, until now no out LGBT candidate in California over the last two decades had been successful in their bid to be elected to the state's executive branch.

Lara had yet to declare victory in the race, however, as of the B.A.R.'s press deadline Wednesday morning. Nor had Poizner conceded.

His defeat is all the more remarkable considering that Poizner had won the endorsements of 24 newspapers in the state and Lara, as Politico noted last week, "barely campaigned for the job." Lara's campaign, for instance, never was able to schedule an in-person interview during the last months of the race with the B.A.R., which was one of the few newspapers to endorse him, despite Lara's making several swings through the Bay Area.

It also likely sinks any chances of Poizner running against Governor-elect Gavin Newsom in four years. As Politico noted, "had Poizner been successful, he would have been immediately on track to mount a decent, and possibly expensive challenge to Newsom for the top spot in 2022."

In the other statewide race that remains too close to call, Assemblyman Tony Thurmond (D-Richmond) has now surpassed charter school supporter Marshall Tuck in their contest for state superintendent of public instruction.

County elections officials must report their final results to the Secretary of State by December 7. Then the secretary of state will certify the results by December 14.